Here it is. The fifth and final transcripts of my ASIO files I have received. I live in hope perpetual hope that one day it will be revealed ASIO recorded something, anything I did that was not in a pub with fucking Leslie.

Unfortunately, the last installment features me in a pub with that goddamn cad. Oh well. I publish it here only due to my unfaltering commitment to truth and transperency. You should probably read the others or you'll be totally lost. 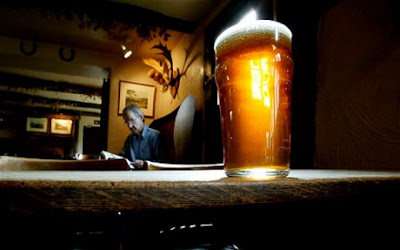 A pub.
[10:01AM, FRIDAY, [REDACTED]. CARLO, WHO HAS BEEN WAITING OUTSIDE THE [REDACTED] HOTEL FOR SOME TIME, IS FINALLY ADMITTED WHEN IT OPENS. A COUPLE OF MINUTES LATER, LESIE JOINS HIM AT A TABLE.]


LESLIE: Court case not going well?
CARLO: Did you know it is actually illegal to kill someone?
LESLIE: I’d heard that.
CARLO: Even if the bastard had it coming?
LESLIE: The nanny state is out of control.


CARLO: That's what is wrong with the modern world! It’s all stick, no carrot! Rather than threatening people with jail, they should reward us if we refrain from slaughtering some goddamn prick who was begging for a machete to the skull!
LESLIE: It’s an interesting idea for reform.


CARLO: Like, well done! You went a whole week without slaughtering a single arsehole! Have some cake! It's your favourite, strawberry cheesecake with cream and chocolate sprinkles!
LESLIE: Have you considered writing to the government about this?


CARLO: OH YET AGAIN IT IS UP TO ME TO COME WITH ALL THE IDEAS! Yet I never get any fucking credit! Like that whole Bill Shakespeare debacle!
LESLIE: You were quite upset when he nicked your stuff.
CARLO: “To be, or not to be, THAT is the question!” My greatest line! No idea what it means, I was smashed when I gave that speech.
LESLIE: Yes, you jumped up on the tavern table and started banging on about slings of fortune and dreams of mortal coils. The scrumpy round Stratford-Upon-Avon was pretty potent in those days. Still, I think Bill’s best steal was that graveyard scene in Hamlet with all those skeletons. You couldn’t accuse him of ripping you off without incriminating yourself! Genius!
CARLO: A talentless hack. Christ, once he read me something he actually wrote himself! Some drivel about some Scottish king. I mean, as if anyone wants to go to the theatre to see a story about a fucking Scotsman! It’s not decent. I assume that play at least bombed and fell into obscurity?


LESLIE: Well asides from being one of the most performed plays ever and on all school curriculums, it's been pretty much totally forgotten.


CARLO: Thank christ! It was horrible, asides from those bits he got me to write with all the murder and bloodshed. Tell me the bit where the Scottish king blows Duncan’s heads off with a hand-held rocket launcher and his brains splatter EVERYWHERE made it to the final cut?
LESLIE: Yeah, that's totally there. I mean a lot of that stuff is taken out or downplayed in the arty stagings coz they say they want to focus on the "human story" and "social relevance".
CARLO: THE HAND-HELD ROCKET LAUNCHER IS TOTALLY SOCIALLY RELEVANT! FUCKING HIPSTERS ARE DESTROYING CLASSIC WORKS OF ART!
LESLIE: To be honest, as a particularly subtle piece of social satire, I fear the nuances of that scene are beyond the average English literature professor.
CARLO: Typical! Still, I have more ideas where they came from! Like my brilliant new idea for a TV show! It’s about this cool guy who drinks all the time and is a total hero and has awesome cheekbones and he goes around killing motherfucking scum and everyone thinks he is GREAT and they make him their overlord and he is called “Carlo”! I think there’s a big market for it.
LESLIE: It ... might work.
CARLO: Of course, it needs dramatic tension and conflict, so there’ll be a character called “Leslie” who hangs around being annoying and getting in the way.
LESLIE: I am assuming this all takes place in a pub?
CARLO: Of course! I can’t save the world while SOBER! Christ. Speaking of which...
LESLIE: Actually, it’s your shout.
CARLO: What? MY shout??? Jesus christ. Moralistic judges, thieving playwrights and now SOME PRICK expecting ME to buy beer! FUCK THIS! [stands up] I'M ACTUALLY GOING HOME NOW!
LESLIE: I guess we have been here a while.
CARLO: But....[starts to fall and steadies himself on the table] ... maybe ONE more whiskey.
LESLIE: I guess one more couldn't hurt...
[THE REMAINDER OF THIS TRANSCRIPT APPEARS TO HAVE BEEN DELIBERATELY DESTROYED. INVESTIGATIONS REVEAL THE [REDACTED] HOTEL NO LONGER EXISTS AND ALL REFERENCES TO ITS FATE ARE HIGHLY CLASSIFIED.]


‘You'd better hope and pray that you make it safe...back to your own world!’ Shakespear’s Sister’s hit single ‘Stay’ is *yet another* example of artists ripping off Carlo Sands.