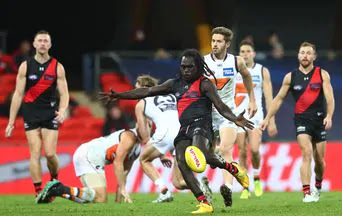 We're in the midst of of an AFL "Footy Frenzy", as the recipients of $10 million hand out of taxpayers cash taken from COVID-19 relief funds put it! Yes they are part way through playing 33 games in just 20 days in a  mad race to finish this weird, plague-interupted season and hasn't it been an absolute feast of mediocre skills, dire games and umpiring so bafflingly irrational it makes Donald Trump look like Dr Spock.

Actually watching all these games in their entirety gets pretty draining, even nothing else to do. So I've decided to help.

Let's face it, the only reason anyone watches a game these days is for the sheer quality on offer from the Channel 7 commentary team.

Imagine a game commentated by wits such as Oscar Wilde, Noel Coward and Dorothy Parker (relegated to occasional special comments as a woman of course) and you barely scratch the surface of what is on offer.

Luckily for you, I've curated the commentary into one easy to read piece that covers any game -- so you no longer have to torture yourself watching insane interpretations of the holding the ball rule, forward 50s so packed with players they are like a pub in a posh suburb mid-pandemic, nor wonder what percentage of players on the ground have committed serious sexual misconduct.

No, I provide the comments culled from real games in a stunning testimony to just how much time on your hands you actually get amid the collapse of human civilisation. This is only a small selection of phrases culled.

Just insert which ever team or players you want.

He gets a hard won ball

Kicks down the line

But only as far as …

That’s a terrible turn over

You can’t do that there

He makes no mistake!

And they’re off to a flying start!

Appeals for a free are ignored

And the umpire says he’ll have it How was that not a free, BT?

Kicks an up and under

I don't think he had any prior there

Dropped on he should have taken

Looks to buy some time

And that's a poor finish

They’ve let them off the hook

And they'll bring it away

Did well to keep it alive

Got away with it

The fans letting the umpire know they don't agree

Well I'm not sure what that was for

And that's a bad let off

He's taken out of it

I’m not sure about that one, BT!

...is front and centre

Hits him on the chest

Familiar territory for him

One against the flow

His team needed that one!

He's up and about this quarter

Got away with one there

And he sees it over the line

What do you think they've got to do here BT?

This is a big moment for…

He needs to go back and slot this

A bit of push and shove

He's wrapped up in the tackle

And they'll throw it in

Saved by the siren!

Not a great finish

He'll be disappointed in himself

They're on the back foot here

He's got nothing to kicked to

Looks up and sees nothing

He just needed to lower his eyes

Next goal here is crucial

Could have almost had a shot

Slides a little hand ball to...

They hit the front!

And it's very much game on!

And aren't the crowd just loving it!

A good pair of hands

What's he got? He's got plenty!

He's dragged off it

A little overzealous on that occasion

And that is a harsh call

I'm not convinced he had prior there

A bit of a chaos ball

Should've held onto that

Kept his feet and did that really well

We've got a game on our hands!

They need a quick response, BT

Numbers out the back here

...will be breathing a sigh of relief

An interesting stage of the game here

The next goal is crucial, you feel

And that's a bad miss

He won't enjoy watchin the replay of that one

And straight away they are made to pay!

It's a penetrating kick

And he doesn't miss those ones!

They're hanging in there

The next goal is crucial in the context of this game

The umpire let's it roll

And the ball's taken over

Very much game on

And that's happening way too often

He’s having a quiet night

I think you’re right about that on BT.

There's a bit of feeling to this game BT!

And it's on just before three quarter time!

They want to be careful they don't do anything stupid here

He's gifted them a goal on three quarter time!

He won't enjoy watching replays of that

The tribunal will have its work cut out this week!

The game is hanging in the balance
Brilliant hands

He makes it look easy

We've got a game of footy!

The viewers at home would be absolutely loving it!

Can they manufacture something here?

Spirals it out to the wing

Which way will it bounce?.

He's got an acre to work with

It's a long way back from here

Can they find a way out

Not much ahead of him

Desperately need the next goal

They've just to to wheel and go

Time's not on their side

They've got to roll the dice here

And he's taken an absolute screamer!

This to seal it

They get a late one but it's too little too late

Lived up to its billing!

What an advertisement for our game!

A cracking start to the round

… Will be very disappointed with that result

They had their chances

But taking nothing away from…that was a quality performance

They've sent a message to the rest of the competition… LOOK OUT!

And don't go anywhere coz we've got MORE FOOTY coming up right after the break!

Picture this, a paper boy
He stands outside a Collingwood hotel
On his back black and white
He hums a tune I've learnt to hate so well...

Is there anywhere you'd rather be
Than with me at the MCG
And if the Saints get done again
By Christ, I couldn't care...

Weddings Parties Anything from when Melbourne people could actually go outside and even watch footy games in person, thus missing the Channel 7 commentary.