Yeah, I know. It has been, like TWO FUCKING MONTHS since I last posted shit here.

And I know what you are thinking: You finally deign to post for us once more and it is to fucking PLUG a a fucking handful of almost entirely of forgettable open mic stand up gigs in FUCKING SYDNEY?

And I know what else you are thinking. You're thinking: "You've changed, man. This is it then is it? Your blog is just some fucking nearly totally neglected occasional bulletin board for whatever random shit you are doing in the next month? HUH? TALK TO US CARLO, WE YOUR FANS DEMAND A FUCKING ANSWER!!!!!!!!"

Fuck. I know, yeah? I get it. Thousands of you wanna know: Where is the Carlo Sands who produced such uncompromising pieces of social criticism, such as the widely lauded, if pretty much never reposted, "Dear Motherfuckers: An Open Letter the United States Government". What happened to the author of "Could This Be The Wall?", a serious and detailed examination of the all-too-often overlooked question of *where* to line up the capitalist fuckers destroying all life on Earth in order to most effectively pump bullets into their worthless, parasitical planet-destroying bodies?

AND WHAT OF THE CARLO SANDS WHO DEFENDED BINGE DRINKING WITH SUCH SCATHING POLEMICS AS "DRINK MOTHERFUCKERS DRINK: AN ALTERNATIVE WAY FORWARD FOR THE NSW GOVERNMENT"? Huh? HUH?

Fuck, seriously, go get a beer. And stop shouting, you are freaking me out.

And shut the fuck up, anyway. It is my goddamn blog. Go write your own, you useless ungrateful little gits.

Oh yeah. They let me on stages these days. I mean... not BIG ones. Tiny ones, in cold rooms in the basements or outside of suburban pubs. But I wanted to let you know *when*. Because I can, having a blog and all.

So, let me see, where *can* you see Carlo Sands in Sydney?

* Tues. August 7 Comedy at the Edge. 8pm. The Pub Formerly Known as the Shannon. (I will never type its so-called new name out)

* Roxbury Hotel some time for prelim final of Quest for the Best.

Actually, of that list the only one I really give a fuck about people going to is the Green Left/Socialist Alliance fundraiser -- also with stand-up comic and Newcastle Greens councilor Hannah Gissane.

You know, coz the Socialist Alliance sorta stands for not letting the corporate fucks kill the *entire* fucking planet. And Green Left -- they gave me a whole goddamn "Carlo's Corner" column to rant in. So I am all for giving these bastards as much cash as possible.

The rest of it just seems cool to list. Like, to someone who doesn't know any better, it might look like I actually have some sort thing going here. You never know, one born every minute, as they say. Speaking of which, you can donate to Carlo Sands at the Pay Pal button on the right hand column.

So what have I been up to then, you ask? Well, you know me, busy, busy, busy. These hangovers don't generate themselves! Well actually, now I am in my mid 30s they kinda do. But anyway.

My last post, I was whining about how hard it is to watch a goddamn game of AFL in this fucking city. I spoke of how I went into some dive in Redfern and asked politely if maybe ONE of their dozen screens playing a rugby league game so I could watch Essendon play Melbourne. Finally, they agreed to change over the smallest screen 0ut the back in the cold, with the sound turned down so the pool players could watch the rugby league on the bigger screen near by -- only, at a crucial part of the game, just as a Melbourne player lined up for goal, the rugby league finished and EVERY SINGLE SCREEN in the joint changed over to music clips and starting playing "Things that Make you Go Hmmm."

It took about 20 minutes of pleading and looking like I was going to cry before they finally put a screen back to the game, in time for me to see the Bombers lose to Melbourne by a goal.

So, give all that, you can imagine, when I recently found myself in Adelaide for a weekend, just how excited I was to be in a an AFL town once more. My visit coincided with Essendon's Friday night game against Geelong and, sure enough, it was the easiest damn thing in the world to find a pub screening it on a huge screen.

Far harder, as I discovered, was finding a pub that *wasn't*. Because the Cats slaughtered the Bombers in a debacle of a match. And it was impossible to escape. I found myself in a dive at midnight surrounded by huge screens replaying the fucking match, and in every direction I looked there was an Essendon's player missing some fucking easy set shot for goal. I ended up pleading with the bar staff to change it over the rugby league -- to no avail.

I also done some stand up stuff. Last post, I described what an open mic gig was like, based on my experiences that week at Comedy on the Edge at the Merton Hotel -- a night on which almost no one but the comics showed up. Well, a week later I was on at the Laugh Garage. This time, only the comics showed up. Not even guy running the evening bothered. So we all just decided to go home.

As well as being cold and wet and dark and in the middle of the CBD, it also coincided with the second State of Origin match. So it was maybe not surprising. But I actually had some shit I wanted to try out ahead of the Quest for the Best heat I had coming up. I was reduced to wandering the streets accosting strangers and shouting at them: "So have you seen those Drinkwise ads??? I can't relate to them!"

Then, a bit over a week ago, I was back on at the Merton. It was just like the last time I was on at the Merton, only minus the handful of audience members. Asides from the six or seven comics, there was the bloke who runs it and the girlfriend of one of the comics.

About half way through, an old bloke who had been to some of the other nights rocked up and sat in the "crowd". But that was after I had been on. It is an interesting experience trying to make nine people laugh. The main thing I took from it was jokes about horses go down well. Unfortunately, I really only have one.

But in between those gigs, I had some good experiences. For one thing, on July 4 I won the heat in the Quest for the Best competition at the Roxbury Hotel. It is by audience vote, and it helped that I stacked it like a desperate Labor Party hack seeking pre-selection for the nation's last safe Labor Party seat. And that it coincided with the State of Origin decider (I was beginning to wonder if there was a policy of only letting me rant on a stage if it coincided with a big rugby league event), thus keeping general numbers low.

But the point is I won. YEAH! VICTORY WAS MINE!!!!


'I just can't relate to their Drinkwise ads...' I'm attempting stand up comedy, so I can't show you my face.

Also, while in Adelaide, I got to rant on stage at a fundraising gig for Green Left Weekly, put on by those young people involve in the socialist youth organisation Resistance.

I have no footage of that event to show you, but I *can* tell you I made jokes about Clive Palmer. I have since read that the mining magnate billionaire wants to clone a dinosaur in his own personal Jurassic Park. And as soon as I read that I swore off Clive Palmer jokes for good. Seriously, there is no point trying to compete -- Palmer does them so much better himself.

However, there *are* pictures. 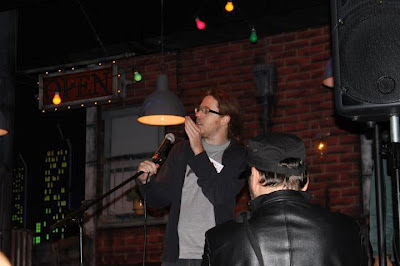 Here, I teach the youth how to do the robot dance. 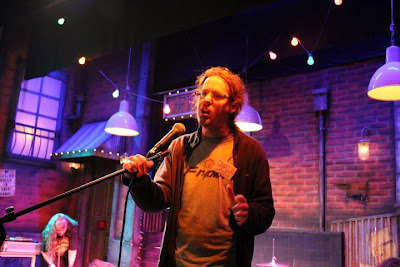 And here I do my famed zombie impersonation.


Anyway, so that is me. I'd *love* to stay and chat, hear all about you, but I gotta run. Essendon's game against Adelaide, in Adelaide, is about to start and so I gotta find out if Essendon will score a badly needed upset win by a narrow margin, or whether they will thump the Crows. In the meantime, here is Texas country singer Hayes Carll, singing my song.