The Queen is dead boys, and it's so lonely on a limb...


So I broke into the Palace
With a sponge and a rusty spanner
She said: "Eh, I know you, and you cannot sing"
I said: "that's nothing - you should hear me play piano"

No fucking clue what the Hell is going on at Buckingham Palace*, although I assume some announcement in a couple of hours is on its way. It could be anything. Prince Philip could be dead, or the Queen's favourite corgi or maybe the Queen herself .

(Yes I know the media said the emergency meeting was CALLED by the Queen, but honestly I think she has people to do that for her. I know if I was a reigning monarch, the very first thing I'd do is rule that under no circumstances would I be required to have ANYTHING to do with ANY meeting EVER again.

(And as for the old racist Prince Philip, I just hope it wasn't the heartbreak caused by Malcolm Turnbull taking back that knighthood Tony Abbott gave the guy. If it is, I think British security should be on high alert at the funeral for a rogue Abbott wielding a sword determined to "knight" the corpse before its buried once and for all.)

All I know is, it sounds like as good an occasion as any for this Smiths track, in which, over a typically awesome guitar playing by the genius that is Johnny Marr, Morrissey does what he does best: combine genuinely witty lyrics with a seemingly bottomless self-pity.

* Update: Apparently the announcement is just that Prince Philip will be performing even less duties in the interests of the public. Like how is that even possible? And who is in charge of official racist abuse now?

I say Charles don't you ever crave
To appear on the front of the Daily Mail
Dressed in your Mother's bridal veil?

So I broke into the Palace
With a sponge and a rusty spanner
She said: "Eh, I know you, and you cannot sing"
I said: "that's nothing - you should hear me play piano"

Passed the pub that saps your body
And the church who'll snatch your money
The Queen is dead, boys
And it's so lonely on a limb

Pass the pub that wrecks your body
And the church, all they want is your money
The Queen is dead, boys
And it's so lonely on a limb

Life is very long, when you're lonely

'My tongue's a match and my veins are full of gasoline...' This might actually be how you do it 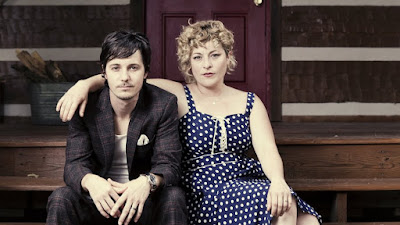 How does one "do" "it"? How does one produce scintillating, dirty, sweaty, fury-driven rock'n'roll to give a massive fuck off to every hypocrite and prick there is, while insisting you will throw any hit "right back", but, like, with only two people on the stage armed with a guitar and drum set?

Well, Shovels and Rope, Charleston, South Carolina's finest product, can probably provide some clues. The married due produce country infused with punk rock energy and a style carved out of endless shows on the road.


So, you better back up
I'll show you bad luck
Ooh you got me shakin in my boots like I was seventeen
My tongue's a match and all my veins are full of gasoline
I come upon ya like a hit of methamphetamine
Eyes roll back in your head
Well I tell you right now, you better watch your back
You can talk dirty til your tongue turns black
But if you're throwin into me I'm gonna throw it right back at you...

They got lucky with one?


We always back the underdog because he's the only one we trust
And if that ones for the winner, this one must be for us...

And they don't do a bad cover.


As I walk through
This wicked world
Searchin' for light in the darkness of insanity.
I ask myself
Is all hope lost?
Is there only pain and hatred, and misery?
And each time I feel like this inside,
There's one thing I want to know:
What's so funny 'bout peace love & understanding?