A reply to a reader on Eurovision II

I have taken my time, but I have finally drafted my reply to Ms Emily Boots on the question of Eurovision.

Now, I have finally provided my long-awaited answer.

Let me say that I was devastated to hear of your death and was forced to take refuge in a bottle of chilled Stolypin (rum being so 20th Century) and said Stoly being a tribute of sorts to the upcoming you-know-what (which hopefully has not been marred by the Georgian acts of aggression).

I confess to great disappointment in your failure to tell me exactly how to watch the Eurovision contest (assuming it occurs--- we need to watch closely the entrants from the Ukraine, Latvia and Estonia, who are rumoured to be planning to sing 'We don't wanna put in' as part of the CIA-Mossad campaign of disruption).

However, I am prepared to give you a bit of leeway, given your state of health (death being generally considered a bad sign). You can redeem yourself in my (bloodshot) eyes if you can pass on to me some information to which you seem privy: you claim to know where I am (your reference to rum), which is something I have been trying figure out for a while now.

Meanwhile, I will create a google alert for 'The Death of Carlo Sands: the Sequel' so I can be the first in my neighbourhood (wherever that is) to know about upcoming events. Idle gossip (the worst kind) has tapped Johnny Depp for a key role, but we've been disappointed before.

Firstly, I wish to offer my sincere thanks at your condolences for my most unfortunate passing. You be surprised at how hard such sympathy has been to come by.

I had always been of the belief that it is the worst possible manners to speak ill of the dead. Alas… it appears little store is placed these days on such common human decencies.

I must, of course, apologise for the sizable time lapse between your comment and my reply.

My only excuse is I have only just, more or less, finished the drinking binge I embarked upon in celebration over the results of Eurovision 2009.

It is not so much the precise winner, which was Norway as it goes. I did, of course, say the Scandinavian countries were a reasonable bet.

No, the real victory lies in the fact that finally decisive action was taken against the absolute disgrace of blocs of nations voting for each other.

A new system of voting was enacted, after concerns about, as the source of all knowledge Wikipedia put it “some broadcasters' continued complaints about politically charged, neighbourly and diaspora voting”.

It was clear the situation was untenable. Esctoday.com explained: “The perception of biased voting has led to a decline in reputation of the Eurovision Song Contest in Western Europe as a fair music competition and led Sir Terry Wogan to resign as the UK commentator after almost four decades of coverage.”


Sir Terry Wogan! What a loss to the Eurovision competition.

In response to this outrage, a new system was introduced for 2009. Under the new arrangement, 50% of the votes in a final round were determined by the popular vote, via the method of televoting. The remaining 50% will be allocated by a properly selected national jury.

Of course, some may raise questions about a weakening of the popular vote. Is this truly democratic?

Let me say this: until the fucking masses learn to use their votes with a bit of responsibility, then such measures shall remain necessary.

That may controversial to some of the more anarchist-minded ultra-radical readers of this blog, but reality bears this out.

Of course, I take personal credit for this development.

I exposed it in my brilliant piece of investigative journalism in the lead up to Eurovision 2008. I exposed, ruthlessly, the shocking abuse of the profound Leninist principle of the right of all nations to self-determination purely in order to secure more Eurovision votes.

This, if I may say so, is exactly the sort of investigative journalism, and commitment to the truth at all cost, that is so sadly lacking from the modern corporate media.

So I take Norway’s victory as a personal vindication of my position. Someone needed the courage to stand up, whatever the cost, and state the truth.

And history will record that that person was Carlo Sands.

So, I hope that you will forgive me a month or two of celebratory drinking, which may have affected the pace of my correspondence.

As to the question of where you are. Let me answer that in a profoundly philosophical sense: in my experience you are you where you want to be. That is why I find myself so often in the pub.

(Though, I may add, not so much the Shannon — readers of the blog should stay tuned for that explosive story.)

PS: At to the possibility of Johnny Depp appearing in "The Death of Carlo Sands: The Sequel", I could not comment. Our relationship of late has been somewhat rocky. But I feel consrtained from saying more.
at 6/18/2009 09:15:00 pm No comments:

Shane MacGowan gets his teeth fixed??? First sign of the coming Armageddon?

I never thought such a day would come.

I mean, this is one crazy, mixed up world — that no one can deny.

But there has always been a constant. One thing on which we could hold on to. Something solid in this ever-changing world.

Something that represented all that was good, decent and worth holding on to as we slide further and further towards the abyss of barbarism.

Comrade MacGowan's teeth were a symbol of everything right in the world. A rebellion against all that was false, manufactured, artificially smooth.

A permanent defence of permanent drunkenness — years of abuse of intoxicants created those teeth! They were an achievement, a life well lived!

Of course, it should be added than an apparently decisive moment came when he allegedly broke his set badly after an all-day drinking session that ended with him tripping over a pile of bricks.

But such a gain is not just the product of one day's work. You spend your life drunk, sooner or later you will trip over a pile of bricks and create a mouth to be proud of!

No, Shane MacGowan has turned his back on everything he once stood for.

He has gotten his chompers fixed.

Yes, this is how he spent the money he eared from a recent tour with a re-grouped Pogues.

Did those Pogues fans forking out hard-earned cash to go and see the original Pogues line up, with MacGowan out front once more, know this is how the tour's profits would be spent?

Did they know that they would be complicit in MacGowan betraying everything he once stood for?

That he would bugger off to fucking Spain to fill the bank account of some overpaid tooth quack to fix him up with some new-fangled fangs?

Well check it out. Here is Shane as we knew and loved him. 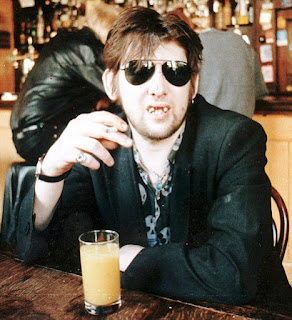 And here he is after his cosmetic surgery. 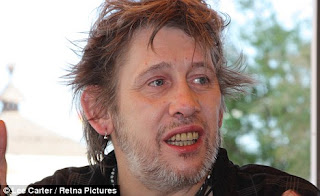 You see how he has caved in to the demands to submit to the dominant body image? See how smooth and conventionally handsome he now looks?

Oh the shame of it all.

I firmly belief that this is the first sign of the coming Armageddon.

And I will say this: if it turns out that Comrade MacGowan has started attending AA meetings, then the final battle between good and evil will have begun.

If this is the case, I trust all readers of this blog will find themselves in the front line — broken whiskey bottle in hand.

'I'll chop you down like an old dead tree...' A good example of Shane MacGowan's teeth in the pre-Armageddon days, before we were over-taken by the all-encompassing battle between the forces of Good and Evil.