Hi 2015, British TV is going to make a *sit-com* about the *Irish Famine*! THAT THE BRITISH FUCKING CAUSED! HAHA! IT'S GONNA BE A GREAT YEAR!

Well Jesus Fuck, any naive illusions that the turn of the New Year might bring with it anything approaching basic fucking decency along with its endless crippling hangovers was quickly destroyed by the glorious news that British TV has commissioned a fucking *sit-com* to be set in the... Irish Famine.

Yes this *is* the same "famine" (so-called despite the fact it was caused by deliberate British policies) that caused the population of the island to *halve*, with about one million starving to death and another million forced to emigrate. HAHAHA!

What next? American TV to greenlight a hilarious new sitcom on the deliberately spread smallpox epidemic that devastated Native Americans? Or perhaps Australian TV might take a stab at a funny-yet-heartwarming comedy about the near-total genocide of Aboriginal people in Tasmania?

I got a joke about the famine for them, too --  they can have this one for free, it's a corker and it goes: "How many potatoes does it take to kill an Irishman?" The answer? "NONE!"

HAHAHA! Get it? It is funny coz it is about a million people starving to death in agony despite the fact their country was producing more than enough food to feed everyone on the island, just most of it belonged to large (frequently absent) English landowners who had it shipped off to England under English armed guard! Fucking hilarious! 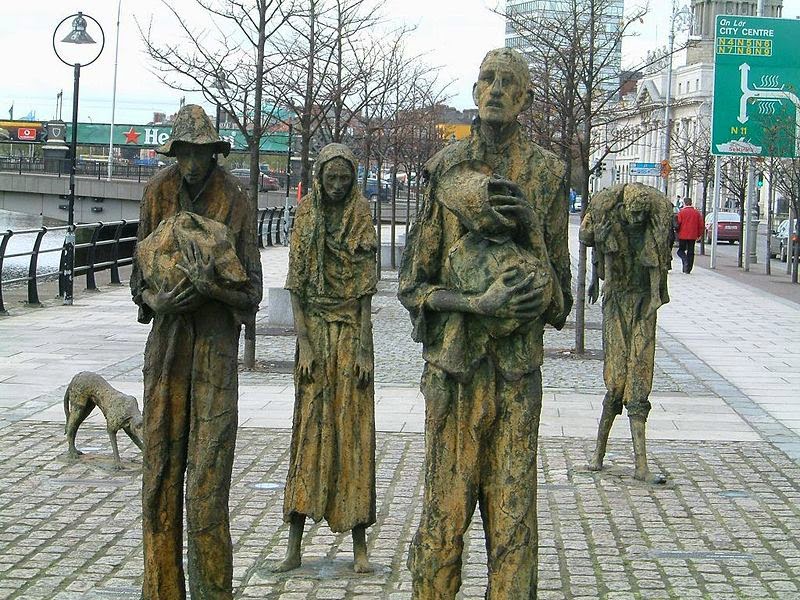 AHAHAHA! Just *looking* at this Dublin memorial to the Irish hunger victims is amusing!


But what *I* want to know is who'll play the wacky-and-lovable-yet-utterly-racist-and-genocidal Charlie Trevelyan?

Sir Charles Edward Trevelyan, 1st Baronet, KCB, was, of course, the cheeky scamp of a top-ranking British official in Ireland who oversaw the policy of denying badly needed relief to the starving masses because, as he wrote in a letter, he viewed the mass starvation as an "effective mechanism for reducing surplus population" and "the judgement of God".

It is likely a moot point, as you can probably bet on the show not featuring those who ruled Ireland at the time -- you know those actually fucking responsible for it, as then-British PM Tony Blair acknowledged in an official apology to the Irish people in 1997 (perhaps in about 150 years or so a British PM might apologise to Iraq for Blair's war crimes).

After all, the show's writer, Dublin-based Hugh Travers, explained: "We’re kind of thinking of it as 'Shameless' in famine Ireland."

The Showtime US version of “Shameless” series depicts the dysfunctional family of Irish American Frank Gallagher, a single father of six children. While he spends his days drunk, his kids learn to take care of themselves.

So we are basing a sitcom on The Famine on a drunken Irish American series. Hard to beat that I'd say.


So, yes. This show looks set to be all about laughing at the poor. It is the victims of that Great Hunger, considered by many to be deliberate genocide, who will be the source of its "humour".

And why not? That seems the fad in comedy -- laughing at the poor without any care for the context of their predicament ... or who is responsible for it.

The best comedy, on the other hand, "punches up", not down. It mocks the powerful and seeks to laugh *with* their victims, not at them.

And maybe, following such an approach, maybe it would be possible to make a comedy series set in the famine -- much like a show like Blackadder Goes Forth found humour in the horrific mass slaughter of World War I. By making the humour the sheer absurdity of the situation, and the incompetence of the aristocratic officer class blithely sending others out to die for a futile cause. 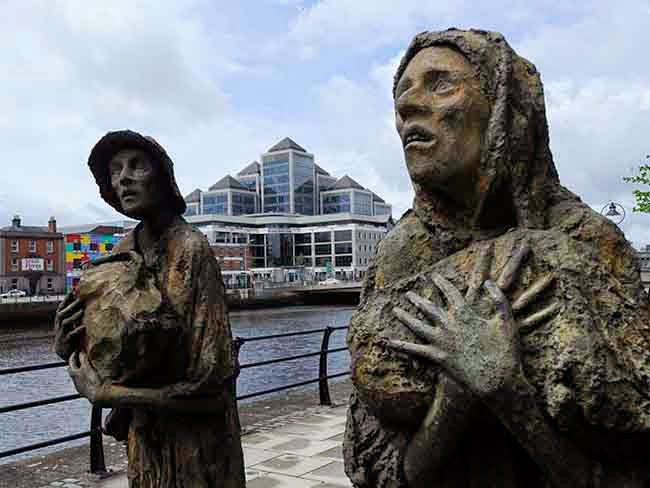 I just *had* to put in another pic of that Dublin memorial. The looks on their faces is too funny!

But whatever, you might be thinking, it was a long time ago. Perhaps enough time has passed... except for the fact that there are stories like this one from January 3, about how the bones of Irish children who died in a "coffin ship" fleeing the Great Hunger 170-odd years ago had just washed up on a Canadian beach.

It is just one example of how the effect of the Great Hunger extended far beyond Ireland's shores. Large numbers of million or so people who fled in the infamous coffin ships headed for North America, but plenty headed here to Australia too. (One was my great great great grandfather who settled in Victoria -- and was a dedicated Orangeman sectarian, which just goes to show even bigots get hungry.)

Strangely enough, the decision by Britain's Channel Four to commission the series has caused widespread outrage. An online petition is calling for the decision to be reversed.

But if you want to make up your own mind, feel free to read a special secret "leaked" version of the script published by IrishCentral.com.

Or have a listen to the issues as spelled out below by Sinead O'Connor. Yes, I know. Sinead O'Connor. I did not want to have to resort to such extreme methods, but really, the fucking Brits had it coming.


'..then in the middle of this, they gave us money not to teach our children Irish...' Those British bastards forced me to do this.


And, OK, why not, while we are on the topic. Here is Irish folk legend Paddy Reilly with his hit version of Pete St John's classic tale of an Irish man during the famine transported as a convict to Botany Bay for stealing food ("Trevelyan's corn").

'Against the famine and the Crown, I rebelled, they cut me down...'