The sharpest analysis of the Iraqi elections on the net

This is without a doubt the sharpest and most accurate analysis I have found on the internet on the elections in Free Iraq(TM). And now you can enjoy it in the comfort of Carlo Sands' google-added blog. With the google ads. Which are just at the top of the page, if you see anything you like. You just give them a click. Don't be afraid! It's simple!

I have never come across the lovely Fafblog! before, but I can assure you my perusing of it confirms its loveliness. 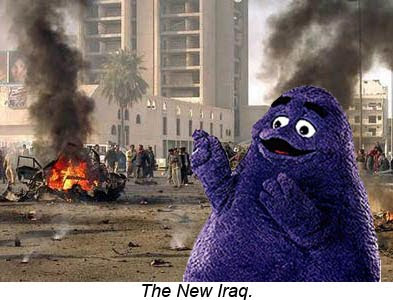 And with that under our belt it’s time for America to pull up its pants, smack the dust off its hands, stuff a million dead Iraqis into the national crawlspace and move on (1).

Wait! What's that! Is that the sound of a desperate Iran being terrorized by Iranians? Looks like a job for America!

(1) Except for fifty thousand non-combat troops, who are to remain behind to shoot people and bomb things in a non-combat capacity.

The world never ceases to stun me.

It seems there is some sort of games competition going on in Vancouver right now. It has the official “Olympics” logo — which, in keeping with hallowed Olympics tradition, means the natives of the host city getting totally screwed.

It also means fun is officially banned and, in you have it, you will get removed from the Olympics village.

The single most ridiculous example came after Canada’s national women’s hockey team advanced the cause of humanity by beating the Americans. Naturally, they wanted to celebrate.

The news is this: “The International Olympic Committee will investigate the behaviour of the Canadian women's hockey players who celebrated their gold medal at the Vancouver Games by drinking alcohol on the ice.

“Several Canadian players returned to the ice surface at Canada Hockey Place roughly 30 minutes after their 2-0 win over the U.S. on Thursday night.

“The players drank cans of beer and bottles of champagne, and smoked cigars with their gold medals draped around their necks.” 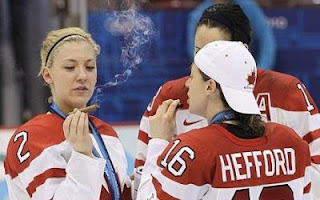 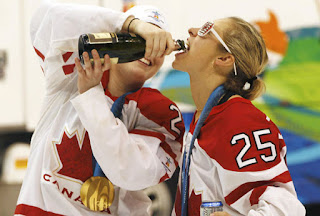 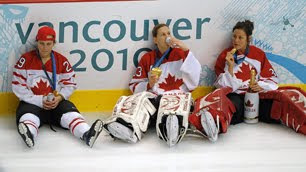 The team, celebrating the achievement for which they have, for reasons best known to themselves, worked astonishingly hard to achieve, managed to earn the ire of the IOC.

There they were, having beaten the yanks, out there on the rink, having a great time drinking beer and smoking cigars FOR ALL TO SEE!

There is no small amount of mysoginy in the outcry. It isn’t very “ladylike” behaviour.

It turns out that, in a generous concession, the IOC had decided that a team could celebrate with an alcoholic beverage behind closed doors in the change rooms.

But it seems that under no circumstances could the world witness their joy.

No doubt the whole smoking cigars thing was part of the controversy. But I am going to go out on a limb and say these elite athletes that rose to the very pinnacle of achievement in their sporting field have not being smoking five of these things a day.

I am going to guess it was a celebratory gesture.

And I am going to guess it was understood as such by every fucking person who witnessed their celebrations.

But equally offensive, it seems, was they DARED TO DRINK BEER! And champagne!

And on an ice rink!

Have these Canadians no limits to their moral depravity?

Even worse, the star of the gold medal-winning performance, scoring Canada’s two goals, is just months short of the legal drinking age of 19 in Vancouver.

Yes, she broke the drinking laws!

But what does this prove beyond the utter stupidity of the drinking laws?

Bad laws are made to be broken — that is a good message for any young viewers to take onboard.

I'll admit it is a bit hard to understand the furore coming from Australia. Whenever our cricket team wins anything, even the coin toss at the start of the game, they all gather out on the field to shout and jump around with the sponsors’ beer in each of their hands and pour that shit all over each other.

I am sure it pisses off the groundskeepers no end. “Jesus christ, do you *know* what ten litres of Crown lager DOES to grass? I am the fucking bastard that has to make that shit grow again!”

To say that open and proud alcohol consumption is part of our sports culture is to offer an example of a gross understatement.

Almost no one could tell you off the top of their heads the batting average of former 1980s and 90s test batsmen David Boon (known as the “keg on legs”), but most everyone in this land knows how many cans of beer he drank in his record-breaking performance during a flight from Australia to England (52).

But the point goes beyond all of that.

The fact is, when scoring an massive a victory, people want to celebrate.

And this celebration should be shared. It should not be locked away behind closed doors. Sharing in the joy of the victors is a big part of watching sport.

It is anti-alcohol moralism gone insane. It is a gross example of moral hypocrisy — drink in the locker rooms, but, for god's sake, don't let anyone see you enjoying yourselves!

There is simply nothing wrong with celebrating. And celebrating involves things like a few drinks and the odd cigar.

That is how it happens. There is no bad example here. It is life.