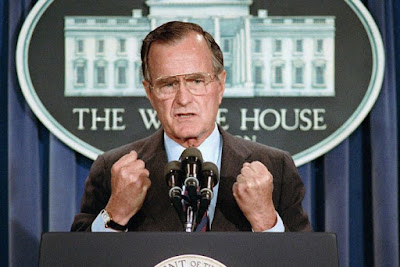 So George HW Bush has suffered an untimely death. Untimely coz the goddamn war criminal and one-time CIA director, who was US president from 1988-92, died at the disturbingly old age of 94.

Why do these bastards live so long? (Rhetorical question: obviously his health care was of a far higher quality for the vast majority of those he ruled can afford.)

Now, as we live in the disturbing world where a barely literate, semi-functional-on-a-good-day Orange Freak is in the White House, explicitly encouraging open White Supremacists and neo-Nazis, it can be easy to look back on the glory days when those who oversaw unspeakable mass murder and destruction of entire countries could at least string a sentence together.

But while Donald Trump may be living proof that things can always get worse, Bush Sr was still a war criminal and bigot, whose administration was responsible for suffering on a scale almost impossible to comprehend.

The brutal legacy of the first Iraq War (which featured devastating use of depleted uranium by the US military) and the US invasion of Panama are enough to make the point, followed by his administration's refusal to act on the AIDS crisis so that the loved ones of those who died from the disease once threw their ashes on the White House lawn in a desperate protest.

Perspective is everything. No doubt Bush Sr was more "civilised" to his opponents within the US political class.

But nothing was civilised about his administration's wholesale destruction of Iraq in the 1991 Gulf War, which featured the large scale, horrific slaughter of civilians as well as retreated Iraqi soldiers.

This was one-side butchering simply because dictator Saddam Hussein (a former US ally) had upset US oil interests by invading Kuwait (which Saddam believed he had the US green light to carry out).

Under Bush Sr., the U.S. dropped a whopping 88,500 tons of bombs on Iraq and Iraqi-occupied Kuwait, many of which resulted in horrific civilian casualties ... U.S. bombs also destroyed essential Iraqi civilian infrastructure — from electricity-generating and water-treatment facilities to food-processing plants and flour mills...

The Bush administration deliberately targeted civilian infrastructure for “leverage” over Saddam Hussein. How is this not terrorism? As a Harvard public health team concluded in June 1991, less than four months after the end of the war, the destruction of Iraqi infrastructure had resulted in acute malnutrition and “epidemic” levels of cholera and typhoid.

By January 1992, Beth Osborne Daponte, a demographer with the U.S. Census Bureau, was estimating that Bush’s Gulf War had caused the deaths of 158,000 Iraqis, including 13,000 immediate civilian deaths and 70,000 deaths from the damage done to electricity and sewage treatment plants.

Still, as retreating Iraqi solider conscripts were blown to smithereens by smart bombs, at least their final thought could have been "at least the uncivilised brute who ordered this isn't also issuing nonsensical tweets that are an embarrassing daily reminder of the likely irreversible decline in US imperial power".

Or they could have thought that if they knew what the fuck Twitter was, which obviously they didn't, being too blown apart to have caught the 2006 launch of the social media platform..

Even before Iraq, there was another case of military slaughter for US interests under Bush Sr -- the 1989 US invasion of Panama. This war was aimed at removing Panama dictator Manuel Noriego, using his various human rights abuses and alleged involvement in the drugs trade as an excuse.

But like Saddam, who the US happily sold weapons to in  '80s while he massacred Iraq's Kurdish population, Noriega had been a US ally until the US decides its interests were better served without him.

The death toll of the US invasion, in which the US air force bombed Panama City's poor neighbourhoods, is contested, but ex-US attorney general Ramsey Clark estimated it about 3000. Human Rights Watch noted:

There, though, a lot more than just war crimes when it comes to Bush Sr's legacy, from his racist policies to deadly AIDS denialism. He also oversaw tax cuts that shifted ore wealth to his corporate mates while devastating ordinary people. He also imfamously ramped up racism as a Republican electoral weapon.


All the fake #Resistance tweeters eulogizing George HW Bush should be reminded that Bush’s disgusting, racist and effective Willie Horton ad was the blueprint for all of Trump’s overt racism. Yes, the genteel Bush brought race baiting back into the open https://t.co/LtlzE13Sbv
— Ali Abunimah (@AliAbunimah) December 1, 2018

But asides from all the butchery and bigotry, what were his personal qualities?

Well I guess no one should ever expect much from their war criminal corporate elite overlords, so maybe it is just in keeping with his life's calling that he has also been accused of being a serial sexual harasser.

After all, it is not much of a defence to have someone say: "Sure he may have destroyed the lives of countless thousands on multiple continents, but at least he never touched any inappropriately!"

Then again, this is hardly a problem for just the extremely powerful. We have ample, almost ceaseless, evidence that you don't need to be a war criminal to be responsibly for serial sexual misconduct. You appear, mostly, to just need to be a man socialised in this society.

All up, it seems that the very best that can be said for George HW Bush is he "isn't Donald Trump". This is a low bar almost all of humanity manage to leap, except for Donald Trump, who probably accuses the bar of being a "Mexican rapist" anyway.

So here are three songs that apply perfectly well to the deceased ex-president-- personally or in terms of the impact of his polices and those of his class on the world -- who is now as dead as the many thousands he helped kill.


Weapons not food, not homes, not shoes
Not need, just feed the war cannibal animal
I walk the corner to the rubble that used to be a library
Line up to the mind cemetery now
What we don't know keeps the contracts alive an moving
They don't gotta burn the books they just remove 'em
While arms warehouses fill as quick as the cells
Rally round the family, pockets full of shells


So you say
It's not okay to be gay
Well, I think you're just evil
You're just some racist who can't tie my laces
Your point of view is medieval
Fuck you... fuck you very, very much

A bitter wind blows through the country
A hard rain falls on the sea
If terror comes without a warning
There must be something we don't see
What fire begets this fire
Like torches thrown into the straw?
If no one asks, then no one answers:
That's how every empire falls
at 12/02/2018 08:16:00 pm