In this Daily Carlo -- my "daily blog" I do every single day and/or twice so far this month -- I tackle the big issues.

Since I last spoke to you, two days ago, the Senate killed Christopher Pyne's higher fee deregulation bill and, in turn, Christopher Pyne killed satire, you know, all part of great and never-ending cycle of life and death, and also Tony Abbott ate another raw onion as though it was an apple -- yes he did it again. 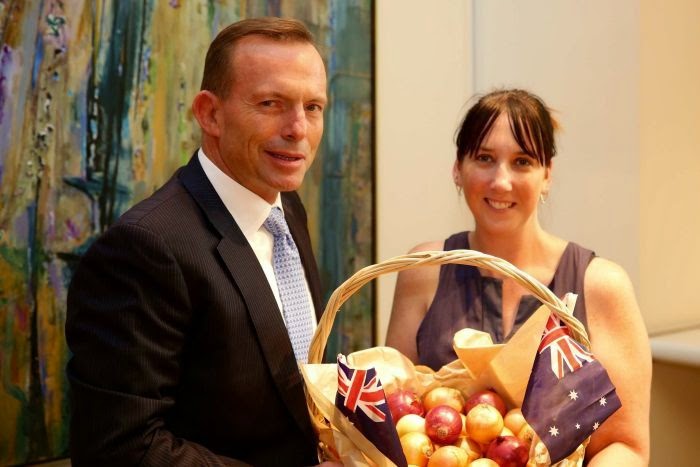 'Hehehe check out these onions! I'd sure like to sink my teeth in one of the them!' Tony Abbott meets with Onions Australia chief executive Lechelle Earl. (That is not actually a sleazy play on words, the prime minster just literally loves eating onions.)


Yes, the media is reporting that today, Abbott met with officials from Onions Australia and proceeded to happily chomp down on the raw vegetable again, with Onions Australia chief executive Lechelle Earl explaining: "He went for the raw onion first but I did convince him to try them cooked and he tucked into that rather heartily."

This raises some serious questions, coming hard and fast on the heels of Abbott's world-infamous onion- eating antics in Tasmania, which is... WHY THE FUCK DOES ABBOTT'S ADVISERS KEEP PUTTING ONIONS IN FRONT OF THE PRIME MINSTER? WHAT ARE THEY TRYING TO PROVE???

I mean, it is not, surely, part of the normal of a prime minister's weekly routine to have so many fucking onions put in front of them, tempting any freaking PM to chomp down repeatedly. What is the thinking here?

Is this another captain's call? With his advisers and cabinet colleagues begging him, "Please Tony, today.... today go visit an *actual* apple farm and try eating something *normal* as though you are an actual *normal* human being and not a bizarre reptilian alien monster that must be confirming all those wacko conspiracy theorists who believe David Icke's mad claims that we are governed by a secret race of Lizard People... coz Tony... you look like  a Lizard Man... hell I am starting to believe David Icke... ah... I mean.... Of *course* I don't... please don't kill me, Lizard Overlord!"

Jesus Fuck well all there is for it is to play The Dubliners version of "Leaving of Liverpool" featuring the incomparible Luke Kelly.... just because. Justfucking because. Just fucking because we have to remind ourselves there is SOME good in the godforsaken world and actualy, our species has, at one time, actually achieved something of SOME FUCKING WORTH THAT DIDN'T INVOLVE ONIONS!!!

Email ThisBlogThis!Share to TwitterShare to FacebookShare to Pinterest
Labels: The Daily Carlo

The Daily Carlo: If you throw a hit at me I'm gonna throw it right back...

As regular readers will know, for a couple of weeks now I've been doing my "Daily Carlo" posts whereby I post on this blog every single day to ensure the Internet gets its *daily* dose of Carlo Sands!!!

It is without question a very important cause and one I remain *so* committed to I have posted *every single day* except for all the days between the last time I posted on February 28! Aside from those days, which have included every single day in the month of March except for today, March 17, I have been posting daily without fail. It is, indeed, an impressive record.

And today, well, really, I don't know that I have anything to say asides from: I FUCKING HATE PEOPLE.

I mean, I try not to let it show, as anyone who has ever had any engagement with me will attest. A more sociable and "skilled at social interaction with other humans" person you will not find on this or any other planet in the Known Universe. FACT.

But... sometimes... sometimes people are just, like, you know, really, really "people-like" and I just want to kill them and then the voices in my head start getting louder and louder till I can't even hear myself SCREAM and then A RED MIST DESCENDS AND EVERY GOES BLANK AND WHEN I COME TO THERE IS BLOOD AND BODY PARTS EVERYWHERE AND POLICE SIRENS ARE WAILING AND I NEED TO GO INTO HIDING ONCE MORE!!!

I fucking hate that.

On days like that, all you can do, should you want my advice (and why else would you be reading this blog?) is listen to God's Gift To Humanity: Shovels and Rope.

Yes, when I say I hate people, I mean people WHO ARE NOT MICHAEL TRENT AND CARY ANN HEART FROM SHOVELS AND ROPE!!! COZ I LOVE THEM!!!

I love them in a maybe slightly creepily obsessive fashion that includes finding their address online then looking at images of their Johns Island, Charleston house on Google Maps ... but I am not going to post the image or link to such things here because that would be wrong and creepy and THEY ARE MINE!!! SHOVELS AND ROPE AND ME HAVE SOMETHING SPECIAL AND YOU JUST STAY AWAY!!!

The best bit about seeing them was when we were like right up the front and they were like just metres away. Like five metres away. I was so close to them I could see the veins bulging on Michael's neck (I call him "Michael" because I have stood five metres from him for like an hour-and-a-half watching his veins bulge and also looked at images of his street on the Internet, so we are pretty close really.)

Actually, the best way to comprehend how I feel about them is to post their song "Tickin' Bomb", which, by the way, they played when I saw them and it was AWESOME!!!


I don’t know you, but I know of you
And from what I know I think I love you
oh oh ooh Oh!
You make me feel like I’m sitting right beside you
If we ever met it’s just no telling
What I might do
Oh oh ooh oh!

My tongue's a match and all my veins are full of gasoline
I come upon ya like a hit of methamphetamine
Eyes roll back in your head
Well I tell you right now, you better watch your back
You can talk dirty til your tongue turns black
But if you're throwin into me I'm gonna throw it right back at you


In other news, today is St Patrick's Day, the Official International Day For Pretending To Be Irish And Using That Nation's Problem With Alcohol As An Excuse To Get Really Drunk -- or as Tony Abbott likes to think of it, "a great excuse to offend an entirely new group of people".

So, to honour the day, loyal readers, here is everything I have ever posted on this Godforsaken blog that has included the tag Ireland.

And here is a great song by The Pogues about a mythical Irish hero and getting really drunk.

The Daily Carlo: A terrible defeat for all humanity and some inspiring life advice!!!

As all dedicated readers of this site know (hi Dad!), I am now blogging every day!

Well... except yesterday. But I couldn't blog yesterday because I respect the Sabbath. And I was hungover. And grieving.

I was grieving, as all of humanity grieved, over the terrible victory by the forces of barbarism that took place the night before when the fucking Smurf pricks of Sydney "Bling" FC beat the Western Sydney Wanderers 4-3 in an epic match.

That final, terrible, score came after the Wanderers -- in a stunning display of proving we have finally figured out where the fucking goals are on a football pitch -- came back from 3-0 down after about 25 minutes to equalise early in the second half, only to finally go down even though the Enemy were reduced, in the final 10 minutes, to 10 men due to what can only objectively be called their Violent Cheating Ways. 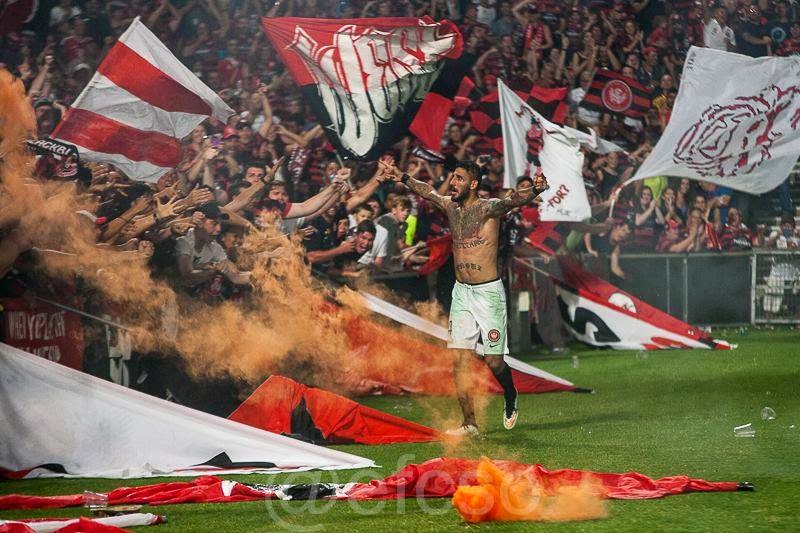 Wanderers striker Kerem Bulut celebrates his second goal and many flares in a tragic 4-3 loss to the Enemy of All Humanity on Saturday night.


Now, I have accumulated a lot of wisdom over my many years. I'm pretty wise. And so, I've come to the conclusion that if I am going to blog ever day, the best thing I could do -- my service to the world -- is to start providing some serious "life advice".

You know, inspiration quotes and all of that. Life hacks. Some of the little "lessons" I have learned on what I like to call, in a sickening display of saccharine self-indulgence masquerading as heartfelt sentiment, "my journey".

So here is my first piece of life advice:

To live a healthy and fulfilling life, the secret is to never, ever, under any circumstances, leave your bedroom or talk to another human being EVER!!! NEVER DO IT!!!

TO BE HAPPY YOU MUST NEVER ENGAGE WITH THE WORLD AT ALL!!! NOT EVEN ONLINE!!! IN FACT, IF YOU ARE READING THIS YOU HAVE ALREADY FAILED!!! YOUR LIFE IS A AN IRREDEEMABLE FAILURE!!! YOU HAVE LOST!!! YOU HAVE FAILED AS ALL BEFORE YOU AND ALL AFTER YOU WILL FAIL!!! YOU ARE NOTHING, HAVE NOTHING AND NEVER WILL BE ANYTHING!!! EVER!!! FUCK YOU, YOU USELESS PIECE OF SHIT!!!


I am hoping someone out there is keen to make this into a t-shirt or, you know, one of those "inspiring" mugs people drink their herbal tea out of or whatever.

Not inspired enough? Here is a Tom Waits song to make my basic point, but put to music!

'Cause hell is boiling over
And heaven is full
We're chained to the world
And we all gotta pull
And we're all gonna be
Just dirt in the ground...