Whiskey, Duels To The Death, Abs And Bushranging: The Carlo And Leslie ASIO File Dialogues Pt 4

Well, I finally got my fourth installment of my ASIO files today. Once more it appears to me sitting in a pub with Leslie. This is getting ridiculous, I swear I’ve done other things in recent years.

Anyway, you probably need to read the first three installments coz otherwise you'll be totally lost as this series is a really complex, with many characters whose stories intertwine as the tale unfolds and features lots of plot twists and you wouldn't want to be lost because then what would you have to talk about tomorrow at work? HUH? Enjoy it because there is only one more to come. 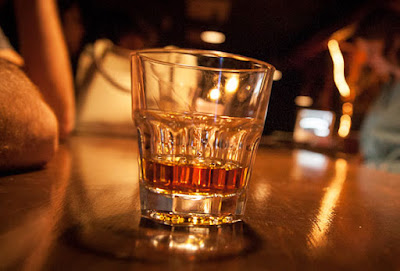 A glass of whiskey. In a pub.
[10.47AM, THURSDAY [REDACTED], CARLO AT [REDACTED] HOTEL LOOKING MORE DISHEVELED THAN USUAL AFTER THE REVELRY OF PART THREE. LESLIE JOINS HIM 15 MINUTES LATER.]

LESLIE: [chewing] Hmmm … You know, croissants are awesome. They're basically made of butter, but then you put more butter on them! And you can't put too much on! No matter how much you put on, you can keep adding more! They're like a bardis.

CARLO: That’s nice. I bought you a whiskey. Here, drink this lovely glass of the “water of life” as it translates from Irish!

LESLIE: You… bought me a drink?

CARLO: Yes! I have a stiff whiskey for you right here! Christ man, you don't drink it I will, poison or no... ah... or NO poison as there ISN'T any poison in it! HAHAHA! Just drink the fucking whiskey.

LESLIE: You’re still bitter about this whole “me winning the duel to the death” thing aren’t you?

CARLO: No! Of course not! Jesus! Hell, OK ... thank fuck I’ve accumulated a tolerance to all major poisons over the years … [skulls the whiskey]. That hit the spot.

LESLIE: Where did you even get the money for that whiskey?

LESLIE: You know, I’ve put up with a lot over many millennia, but trying to poison a friend is a bit rough.

CARLO: FRIEND? YOU FUCKING BEAT ME IN A DUEL TO THE DEATH!

LESLIE: You know, I’ve actually had people question whether you’re truly dead. It's quite insulting, because it is very poor form to claim victory in a duel on a questionable outcome. If there’s one thing that we both agree on, it’s the need to maintain the fundamental dignity of a duel.

CARLO: And that all duels must be carried out without pants. The two essentials.

LESLIE: Absolutely. What are you doing?

CARLO: What? Just admiring my abs.

LESLIE: You have abs?

CARLO: Of course I do! They’re as hard as a bag of marshmallows! I’ve spent a heaps of other people's money on beer to get them this way. This stomach is a work of art! I’m going into business to sell my secrets to the perfect belly.

LESLIE: You’re advertising now? Implausible testimonials and claims that “you too can achieve these amazing results” by following Dr Sands' exclusive program? No one can possibly believe you can achieve your impressive results without some serious hard work.

CARLO: I don’t offer instant overnight success! I always tell people, you gotta work at it, you gotta constantly be drinking beer, eating crap food, sitting down seven-days-a-week, 52-weeks-a-year, 10-years-a-decade, 10-decades-a-century-or-until-the-liver-fails. Don't expect that you can do it a couple of days and the rest of the week be out there at the gym, eating fucking tofu and necking mineral water! I say “THIS IS SERIOUS! SO GIVE ME YOUR FUCKING MONEY!”

LESLIE: Speaking of daylight robbery, I was just reading an article about old Moondyne Joe. You remember, the bushranger? I’m surprised nobody's made the connection between you and Moondyne. Like, they think he just ended up that insane on his own?

CARLO: Born poor in Cornwall, became a petty criminal who was transported to Australia in 1852 where he took up bushranging and became famous for his many escapes from jail?

CARLO: Never heard of him. [hissing] FOR FUCK’S SAKE THIS IS A PUBLIC PLACE!

CARLO: Anyway, I was on a surfing holiday in Hawaii at the time. [hissing] FUCK man… SHUT UP!

LESLIE: Yes… [starts humming a random tune in a bid to nochalantly change the topic] Hey, have you ever been singing to yourself, and then you get so irritated you call the cops on you to shut yourself up?


CARLO: You’re not drunk enough. Otherwise you'd be pushing yourself shouting “come on you bastard, you know the words COME ON! [singing badly]‘I MET MY LOVE BY THE GASWORKS WALL, DREAMED A DREAM BY THE OLD...’” then you’d pass out. That’s how I do it. Here, I'll show you...