OK, this is the third installment of my ASIO files, and I have to admit, but now I was starting to see a certain trend. Apparently the only thing ASIO care about is recording me in some pub with the cad Leslie. FINE! We can only hope the remaining two installments provide us with something of actual interest.

You can read the fucking thing below, though I should warn you should probably read the previous two installments as this is a pretty linear, plot-driven series and you might otherwise get lost. 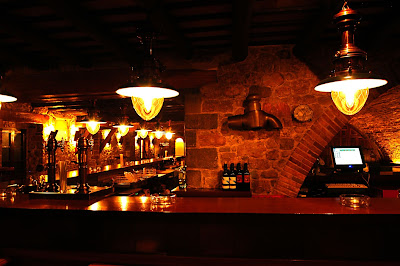 CARLO: I gotta hand it to you. You finally came through with a beer! And it tastes pretty sweet!

LESLIE: Yeah, I found it in the hand of this passed-out guy in the beer garden. It was pretty much full too, just had to wipe a bit of his vomit off.

CARLO: I still haven’t forgiven you though.

CARLO: You know why.

CARLO: YOU FUCKING BEAT ME IN A DUEL TO THE DEATH! I AM NOW DEAD!

LESLIE: You're still going on about that? You challenged me to a duel to the death because I had “insulted your honour” by failing to buy you another beer, declaring that you “demanded satisfaction”.

CARLO: My reputation as a gentleman was at stake!

LESLIE: So I chose aging as my weapon. State of your liver’s so bad, you can barely drink a ginger beer without falling over.

CARLO: And it was with such innocence I took that Facebook quiz “When will you die”! I still remember the result... October 21, 2008. It was only when you OH-SO-HELPFULLY pointed out it was already 2009 that the truth struck me... I was dead!

LESLIE: How do you think I felt? Being the slayer of Carlo Sands after all those millennia, when so many angry mobs and enraged bartenders had failed! Every cowboy in the known universe wants a crack at me! I had three assassination attempts on the walk here just this morning! Luckily, those Tai Kwon Do lessons have proven handy.

CARLO: YOU SHOULD HAVE THOUGHT OF THAT BEFORE YOU MURDERED ME WITH A FACEBOOK QUIZ! Jesus. Now my beer's empty. Just coz I’m dead doesn’t mean I am NOT THIRSTY!

LESLIE: I’m right ahead of you. I saved you this one from the table next to the passed out guy. This bloke had actually thrown up right into the schooner, but I borrowed a sift from the pub kitchen and I think I got all the chunks out.

CARLO: Ah! You’re alright! You might be a murdering bastard, but this beer is going down gre... [chokes loudly] AARGH!

LESLIE: Sorry, must have missed a bit.

CARLO: [coughs it out] I hate pineapple!

LESLIE: I know you are upset at being dead...

CARLO: The hangovers are even worse!

LESLIE: … but just think of what you achieved with your life! The discovery of fermented fruit, the invention of human sacrifice, the sack of Jerusalem ...

LESLIE: Three times. That was you with the Assyrians, wasn’t it? 8th century BC?

CARLO: Oh yeah, I had forgotten that one. I was pretty drunk.

LESLIE: And of course the Black Death!

LESLIE: A third of Europe dead! Your proudest moment.

CARLO: I suppose I did achieve a few things. But I never conquered Persia!

LESLIE: Not the Alexander the Great thing again...

CARLO: The bastard left without me!

LESLIE: He couldn’t get you out the pub when it was time to go!

CARLO: It was happy hour! And that pub band was going off! Still I have to say, their version of “Dirty Old Town” was pretty shit. I kept shouting at them to play that poetic yet gritty take on life in a post-war northern English industrial town... but they just kept saying “It’s the 4th Century BC, what the fuck’s a gas works wall?” I had to put my machete right into their faces and scream “PLAY IT YOU PRICKS!”

LESLIE: Brave effort, though. And Alexander got his come-uppence. You never told me how you ended up in Babylon that night, but I'd recognise your handiwork anywhere.

CARLO: I guess you’re right. I have achieved a lot! Come on, you murderous bastard, another drink to celebrate!

[FROM THIS POINT ON, NO FURTHER CLEAR DIALOGUE CAN BE DISCERNED FROM THE RECORDINGS. AT ONE POINT, IT APPEARS THEY COULD BE ATTEMPTING TO SING THE IRISH FOLK BALLAD “THE FIELDS OF ATHENRYE”, OR POSSIBLY SOMEONE IS ASSAULTING A POSSUM.]

‘Against the famine and the Crown, I rebelled, they cut me down...' It is unclear if this was what the ASIO transcript captured or if a marsupial was being tortured. Stay tuned for more!
at 7/24/2015 06:46:00 pm