When the Australian men's cricket team slumped to a catastrophic defeat and loss of the Ashes in the fourth Test at Trent Bridge after being bowled out in the first innings for just 60 in the shortest innings in test cricket history, former Australian wicketkeeper-turned KFC spokesperson and occasional commentator on the cricketing matters Ian Healy knew exactly who to blame: the Devil Women!

Some fools, far less informed on the intricacies of the game than a veteran of 119 Tests like Healy, put Australia's batting collapse down to a combination of a brilliant fast bowling by Stuart Broad, who collected career-best figures of 8/15, and the terrible technique and shot selection displayed from Australia's incompetent battling line up.

But Healy knows better: it was actually the fault of the team's wives and girlfriends -- collectively known as the WAGs. The Guardian reports:

The former Australia wicketkeeper Ian Healy has blamed the side’s poor form in the Ashes series on the presence of the players’ wives and girlfriends on tour, describing them as a “distraction” ...

[Healy] believes the presence of family members has not helped Australia’s cause.
“All their partners are here and some of the most respected cricketers I played with hated that distraction. They weren’t allowed on tour until after the series had been won,” Healy said.

“Your mind needs to be completely focused on it. Cricket is a sport that requires complete concentration. You need everything going for you and I’m not sure they’re pushing for that hard enough ...”

It is not clear exactly how they did it -- beyond his reference to "a distraction", Healy himself is somewhat vague on the matter.

But it should surely be clear to all these women have no business polluting the men's world of professional sport with their babies and designer handbags. Presumably, they tired the poor men out with all their endless nagging, I mean, really, you know what they're like.

In Healy's day, wives and girlfriends knew their place -- far away from sporting grounds. And I suppose the feminists consider this progress! All out for 60!!! The Ashes lost!!! Michael Clarke's career probably finished!!! I just hope they're all happy!!! 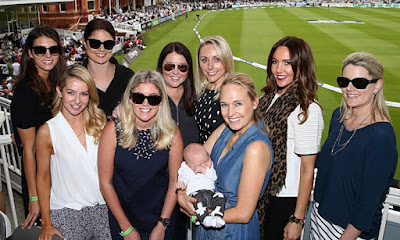