The Daily Carlo: Well Jesus fuck, the week this country has had... let's just have a *nice song*

On top of everything else like the torturing of children in jails and like children in jails is horrific enough, especially when you consider how unspeakable the jails are, and the ongoing genocide against Aboriginal people with huge incarceration rates and the fucking fact that you can fucking kill workers, in the 21st century, you can be responsible for the death of building workers on your site and when the workers protest your fucking responsibility, when they say for god's sake let's improve safety.... the trade union involved gets fined $3.5 million... and the employer? NOTHING! NOT A FUCKING THING THEY CAN JUST KILL WORKERS WITH FUCKING IMPUNITY!!!

Because THIS WEEK  a man found not guilty of terrorism dared asked a fucking elected politician a question of some fucking TV show apparently set up for that very purpose of having members of the public ask questions... and THE FUCKING GOVERNMENT USED IT AS AN EXCUSE TO SEEK TO SMASH THE ABC, WHICH IS SO COWARDLY IT GOT ON ITS KNEES TO BEG FOR MERCY ONLY THERE WAS NO MERCY COZ ABBOTT SMELLED BLOOD SO HE CALLED A PRESS CONFERENCE WITH *TEN* FLAGS!!! YES TEN!!! A RECORD!!! AND HE SAYS "HEADS WILL ROLL!!!"

Because, as our prime minster asked the supposedly independent national broadcaster... "Which side are you on?"

And why? Because of a perfectly obvious point that severe attacks on the Muslim community, including the destruction of the rule of law, would likely lead to more radicalisation among young Muslims.

And the man who was asked the question was Liberal MP Steve Ciobo -- a member of the government, you know those in power. And he said, on national TV that he would be happy to see the questioner deported! Like thrown from the country!

Why was this such a fucking scandal? Because he was once accused and then acquitted of terrorism-related charges and dared ask him a question he didn't like! And the scandal for the government and the Murdoch press is the bloke got to ASK A QUESTION!!! And this man, this elected MP, is on record as saying the previous prime minster should have had her throat cut!!!

The Murdoch press, arguably, went a bit nuts with this "scandal". 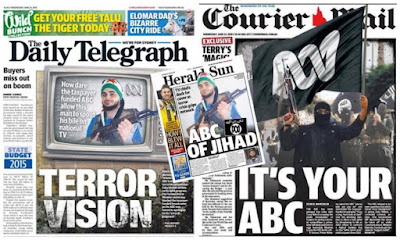 But unlike some they were willing to ask the hard questions: 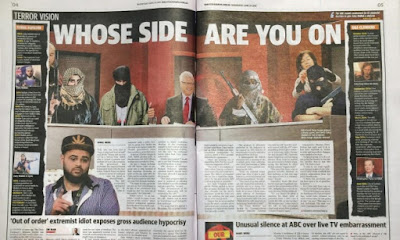 AAARGHH JESUS FUCK! Now an inquiry in the ABC to smash them up a bit further. On top of the most insane laws stripped people of the most basic democratic rights.  And this is barely scratching the surface really. This is just all I can think of in a stream of consciousness rant fuelled by cheap cider.

So I think we need this song. We specifically need glorious country folk husband-and-wife duo Shovels and Rope singing it. We need their glorious version of Nick Lowe's classic song. So play it. For christ's sake play it. PLAY IT!


'As I walk through this wicked world... searching for light in the darkest of insanity...' And no. I don't care if you think I am a fucking bleeding heart hippy. FUCK YOU.

(What's So Funny About) Peace Love And Understanding


Yeah. So FUCK YOU. I hate you all. Just listen to the song. Why can't you all be more like Shovels and Rope's Cary-Ann Heart and  Michael Trent, you goddamn arseholes?