In today's Daily Carlo, I will share two things I learned by going into the horrible depths of NSW Parliament House tonight at Macquarie Street... that I am going to put *on my blog* despite having put it on Facebook because I have decided that fuck it. FUCK IT. I AM GOING TO START USING MY BLOG TO *MICRO BLOG* AND JUST PUT UP RANDOM SHIT!!! COZ I CAN!!! FUCK YOU!!!

NSW parliament is not like other parliaments I have visited. the WA parliament is no where near as "historic", "prestigious" and "fucking pompous" as this building. SA parliament? Don't joke. The ACT Legislative Assembly is a fucking B-grade , all-plastic convention centre compared to this. Not even the federal parliament feels as "steeped in history"/pompous crap" as the NSW Parliament.


And these are the lessons of my visit to the place:

1) the security police are *much* friendly, nicer and happily jokey than they are when you have to go to court.

2) The fucking beer is reasonably priced in the parliamentary bar. Like I mean $5 for a fancy fucking over-hopped pale ale craft beer that, anywhere else, with that amount of suits and soulless bar atmosphere, would surely cost like $8 or $9. I mean you can barely get a fucking schooner of VB or Toohey's New anywhere in this state for five bucks these days. WE ARE PAYING FOR THESE GODDAMN HACKS TO DRINK REASONABLY PRICED BEER! IT IS AN OUTRAGE!!!

To expand on point one... at least I *got dressed up for fucking court*. You would think they would give you *some* respect! But no... cold, mechanical, harsh, soulless... that is some of the things the mothers of the cops at Parramatta Court House say about their sons who work there as security.

But Parliament House? Never mind I went in looking like I'd just woken up from my park bench I call home, as I go through and set off the metal detector the cop is all like "steel caps in your boots? not a problem... only problem is you are still sober at this time of night!" (Somewhat presumptuous to assume I was sober...) Way out was met with equally jokey cops. I really am not used to, and feel quite nervous around, friendly cops.

And while we are on the topic of point TWO... I should point out it was hardly a smooth ride... they really didn't seem to want us in their bar and for ages we couldn't get served because the guy behind the bar was very clear that you needed to be associated with some sort of sitting elected parliamentarian. And ours had disappeared to go off to prepare a speech for somethingorather. Eventually one parliamentarian was scrounged up by someone who *knows* these kind of people and the nicely dress man behind the bar was satisfied he was allowed to serve us.

Which was fine until I needed to order another and, standing there for sometime while the man behind the bar did various other tasks, was not convinced I would *get* served at all, what with looking, as I explained, as though I had just arrived from my park bench. But sure enough he did... and I was stunned by the change I got for the twenty I gave him. STUNNED! OUTRAGEOUS! THIS IS THE TAXPAYERS MONEY HE WAS GIVING BACK TO ME!!!


You might be wondering why I was even there.,.. and that reminds me. Point three. I didn't just learn it at Parliament House today, but was told of it once more .. .and that is:

Established, proven, collusion between the British state and death squads in northern Ireland to carry out the most heinous, unspeakable, stomach turning, soul wrenching massacres of civilians is truly ... well fucking unspeakably horrific.

And for more information, read this article by some prick who wore a suit to parliament today (and was forced to tolerate me shuffling along after him) about more details. Or watch this documentary about the British state's use of what can only be described as serial killers to slaughter civilians, often wiping out whole families. And think about both how this is a direct continuation of an approach the British state took to other parts of its Empire over the centuries, perfectly the craft, and how this practice in Ireland has led directly to the occupiers actions in Iraq -- using sectarian violence and death squads to divide and rule for Great Power.

If you really want to have your stomach turned, your tear ducts dried out and your heart taken and stomped on and smashed into a thousand pieces at the sheer unspeakable destruction of innocent human life driven by hatred, bigotry, cold-blooded hypocrisy that has never been properly recognised or had anything like justice administered for, then you can read Anne Cadwallader's Lethal Allies. 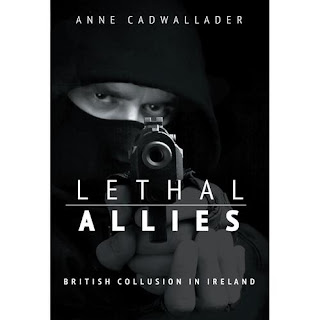 Oh well. Luke Kelly sings a mean song about the mess, at least.