The Daily Carlo: The evidence Sweden never deserved to beat the Matildas today

My latest Daily Carlo -- you know, my ceaseless campaign of daily blog posts I launched a while back that has proven just as on-time and reliable as a Sydney bus -- is on the 1-1 draw secured by the Australian women's football team, the Matildas, against Sweden today in the Women's World Cup in Canada.

I had the pleasure of watching this match, which began at 10am Sydney time, because I "work from home" on Wednesdays, which, as anyone who has ever "worked from home" can confirm, involves a tough regiment of scouring the TV guide to see whether there is anything worth watching to kill the hours on the basis that a sudden rush of activity before dinner will sort you out (which becomes "after dinner" and then "when I get up extra early tomorrow morning" and then "oh just fuck it, I guess that shit isn't going to happen").

Today, I didn't have to hold out a desperate hope to see a repeat of a Midsomer Murders episode I hadn't seen in the past couple of years and had therefore forgotten who the killer was, because the Matildas were playing a crucial match against highly rated Sweden.

Australia needed at least a draw to qualify for the elimination rounds and Sweden most likely needed a win -- so it promised to be an enthralling clash. And so it was.

But despite the Swedes brilliant 15th minute equaliser and some near chances missed not long after, the Australians held on for the needed draw... and frankly they deserved to for reasons that have nothing to do with on-field events.

Now... I have issues with Australian nationalism that often to make it difficult for me to actively support and "cheer" Australian sides. Stolen land, torturing children of asylum seekers, actively supporting US crimes... this is not actually that nice a nation.

I am not trying to make a big deal over this, just it is a fact that the cry of "Aussie Aussie Aussie, oi oi oi" tends to turn my stomach and a lot of Australian sporting "stars" -- Australian male cricketers being prime examples -- seem more like poster boys for macho Australia arrogance than anything else.

Yes *OK* I hear you screaming, Alan Jones, just string me up later and let me make my fucking point on this case... which is... as well as feeling that anything that promotes women's football in this country, or women's sport in general (the first to get cut when there are cuts) is worthwhile... it is also true that when it comes to playing Sweden, there can be *no question* about which side to back if you have *any sense of human decency* or commitment to the concept of *progress* and *civilisation*.

Because ongoing genocide against this continent's First Peoples is one thing. But at least we have *never* done this: 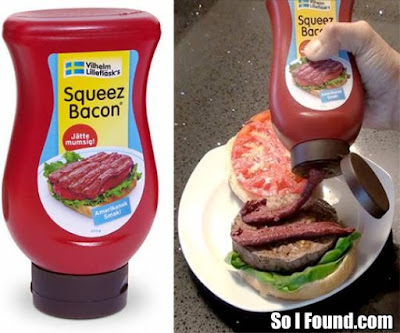 It is not right and, a close observer will note, right there on the bottle the flag of Sweden. And some writing that, to my eyes, looks disturbingly *Nordic*.

This shit is not acceptable. No one has any right to *do this* to bacon. Jesus fuck YOU DO NOT MESS WITH FUCKING BACON YOU SWEDISH PRICKS! YOU *DO NOT* PUT IT IN A FUCKING BOTTLE TO BE *SQUEEZED OUT*!!!

Who the fuck *does* such a thing? THEY DO NOT DESERVE TO WIN ANYTHING!(1)

It has been suggest to me there may be more here than meets the eye. That this could be a bit of cynically calculated piece of geopolitics on grounds that, apparently, bacon is a major economic and cultural export and identifier for fellow Nordic nation Denmark.

And that, therefore, desecrating it so horrifically could be something these Swede bastards might do as part of a "cultural Cold War". Especially given how tight the competition between them is in Eurovision and crime television exports.

Maybe, but really, as that suggestion came from Leslie, the only bastard to ever beat me in a duel to the death, I think we can discard it.

But, for the record, this *cad* offered the following statement: "I bet there's an evil, squeezable version of some iconic Swedish product made in Norway."

Like what? You mean the Danes have iconic Swedish detective Kurt Wallander available in *bottle form*? So you can squeeze out your dose of understated weariness and air of resigned melancholy combined with an instinctual skill for deducing murderers with your fucking cornflakes?

I don't know. If so, I just say these former vikings in the Nordic nations are more messed up than I could ever have dreamed. And I know what bacon is. And I don't appreciate this Swedish innovation *at all*. 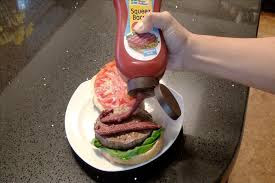 
Jesus fuck. Someone had to speak out and yet again it is up to Carlo Fucking Sands. Do the decent thing and buy me a beer for my troubles via the Pay Pal donate button on the right side of the blog.

In the meantime, here is a Swedish singer-songwriter Miss Li doing her bit to make up for all the crimes/explaining how such crimes come to be committed.


'No I just can't stay forever drunk...' I hope this is a metaphor for Sweden and one day the nation will awake, hungover, to cry regretfully: 'My god what have we done!'


(1) I have since been informed that, although likely out of the World Cup, the fucking Swedes did Eurovision this year, which only goes to show how backward, retrograde and frankly *insulting* that so-called "music" competition is!

And yes I am still bitter about 2008 when the Ukraine was *robbed* by Serbia in what I rightly denounced at the time as the Great Balkan Scam! I cannot help but feel had justice been delivered at Eurovision seven years ago, the current violent conflict tearing the Ukraine apart may have been avoided.