This world, in many ways, is in bad shape. If it is not the growing ecological crisis, the war crimes of the Empire or Australia's determination to do its best impersonation of apartheid South Africa, it is the insistence of the corporate media to destroy any of the *actual* gains of modern civilisation -- to spit on them and drag them down.

When not ignoring, distorting or excusing the worst crimes of a decrepit system in terminal decline, racing towards barbarism like a giant mining corporation towards a fresh source of the most dangerous substance known to humanity to dig up and place in plants or bombs, the corporate media seems to take special joy in committing acts of unspeakable barbarism against popular culture.

I speak, of course, about the truly farcical "list" presented to the general public by that notorious British right-wing publication, the London Telegraph, purporting to "rank" the top 20 performances on screen of the world's first and greatest "consulting detective" Sherlock Holmes.

Look at the list. Go on, just have a look.

No, your eyes do not deceive you! Jeremy Brett's Sherlock Holmes, portrayed in 42 episodes for Britain's ITV between 1984-94, came third. 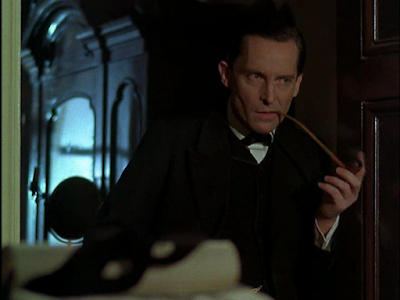 
What is more, it actually listed as *second*... Basil Rathbone -- whose Hollywood film depictions did so much to bastardise Holmes, turn him into a straight-out, uncomplicated *deerstalker hat-wearing* hero going on brave adventures and fighting Nazis and other World War II propaganda outings that bore sometimes but vague connections to Conan Doyle's creation! It was up to Brett to FUCKING RESCUE Sherlock Holmes from such a travesty.

The winner was Benedict Cumberbatch for the BBC's latest Sherlock adaption, in an updated series set in the modern day. Now, do not get me wrong. Cumberbatch turns in a fine performance. He injects enough manic edge, arrogant aloofness and spark of genius into the role. I really quite *like* his performance. I am a fan. A perfectly decent *second* would Cumberbatch have made in any list that aims to be taken seriously.

No one is better than Jeremy Brett at bringing to life that most amazing and complex of literature's heroes: Sherlock Holmes, consulting detective.

Even the Telegraph is forced to concede "For many, Jeremy Brett is Sherlock".

Yes, you fools, "for many". Indeed, surely, for *anyone* who knows anything about Sherlock Holmes, who has ever read the fucking stories and then *seen* Brett tear up the screen.

Such drama! Such passion! Such a personality, battling those internal demons that, all too often, haunt the true men of genius! This clip alone says so much about the man and his personal demons.


And it is not just the great detective, but the great actor who brought him to life on the screen as none before or after him have done, who battled demons.

It was Brett's great mission in life to bring Holmes truly alive, and he threw himself into the task with extreme passion and dedication.

The source of all knowledge, Wikipedia, informs us Brett "wanted to be the best Sherlock Holmes the world had ever seen. He conducted extensive research on the great detective ... One of Brett's dearest possessions on the set was his 77-page 'Baker Street File' on everything from Holmes' mannerisms to his eating and drinking habits. Brett once explained that 'some actors are becomers — they try to become their characters. When it works, the actor is like a sponge, squeezing himself dry to remove his own personality, then absorbing the character's like a liquid'."

Based on his obsessive observations and studies, Brett introduced a series of mannerisms, hand gestures and short violent bursts of laughter, that helped more fully realise the great detective's character on screen.

Wikipedia notes: "Brett was obsessed with bringing more passion to the role of Holmes ... Holmes' obsessive and depressive personality fascinated and frightened Brett ... Brett started dreaming about Holmes, and the dreams turned into nightmares."

It took its toll. The stress of his obsession to create the perfect Holmes lead to a nervous breakdown in the mid '80s. Brett sacrificed himself for his art, but returned for more.

Physical as well as mental health increasingly failing, often dependent on an oxygen mask simply to work, Brett marched ever onwards. "The show must go on, darlings!" he is quoted as saying.

Such dedication to a task as important as this resulted in what is surely one of the greatest artistic triumphs of the modern age. And... THIS IS HOW THE FUCKERS REPAY HIM!!!!

Well, I am a calm man by disposition and I can take many things. But this is too much.

I must confess I rarely find myself in agreement with your editorial line. But supporting brutal imperialist governments that massacre the poor abroad and abandon and brutalise them at home is one thing. Placing Jeremy Brett only at *THREE* in your list of the greatest portrayals of Sherlock Holmes, however, is a crime on an entirely different category, one that abuses the memory of a man who cannot fight back, being dead. I, however, can. I write to tell you shall never be forgiven for this crime.

Yours in ceaseless hostility and rage,

PS: And while we are on this topic... I note one obscenity was not enough for you goddamn arseholes. After your atrocity in the case of Holmes, you had the temerity to draw up a list of the top 10 performances of Dr Watson on the screen. After having the misfortune of reading your list for Holmes, my hopes were non-existent and, sure enough, they were fully realised. Seriously... number one is Nigel Bruce??? Who played opposite Basil Rathbone in the old Hollywood films???

The winner is quite obviously the man you deemed merely *second* -- Edward Hardwicke, who played along side Brett from the third season on, followed by David Burke, who played opposite Brett for the first two seasons. Both of whom played far less cartoonish Watson's much more in tune with Conan Doyle's original.

They were perfectly admirable counterparts to Brett's Holmes -- forming great artistic partnerships that brings to mind the sometimes troubled, yet artistically brilliant partnership I myself enjoyed with Ben to create the highly acclaimed Conversation series. But what the fuck would you useless pricks know of that?