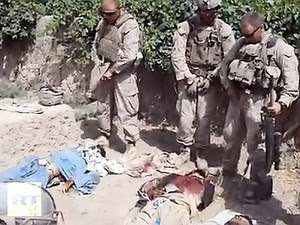 Slaughtering the natives is one thing, but for FUCK's SAKE show some decorum.


This is an article I wrote that was first published in Green Left Weekly.

It wasn't long into 2012 before fresh evidence emerged of a democratic, free West's civilising mission, providing a sterling example to backward barbarians as the march towards global liberation continues apace.

All in one day, January 13, the media carried three reports shining a spotlight on the higher values and morality of the democratic West: the footage of United States soldiers urinating on the corpses of three Afghan men, the fallout of the murder of an Iranian scientist most likely committed by Israel and the recommendation by a US military tribunal to court martial alleged WikiLeaks source Bradley Manning.

The stories coincided with the 10th anniversary of the US Guantanamo Bay prison camp opening. It is still going strong, holding an estimated 171 detainees without charge — who marked the anniversary by announcing a hunger strike on January 10.

The leader of the free world, US President Barack Obama, marked the occasion by signing into law the 2012 National Defense Authorization Act. Democracy Now! said on January 10 that “some legal experts say [the law] would authorize the military to indefinitely jail anyone it considers a terrorism suspect — without charge or trial”.

Michael Ratner, president emeritus of the Center for Constitutional Rights, told the show this made Obama “the first president ever ... to sign into law indefinite detention as part of the policy of the United States”.

US officials tried to portray the footage of US soldiers urinating on Afghan corpses while cracking jokes as an isolated incident that does not reflect the true nature of US-led occupations.

Just like the Abu Ghraib torture scandal in Iraq; the US army “kill team” that collected the body parts of dead Afghans; the British soldiers who tortured an Iraqi man to death in 2003 (using methods a public inquiry in Britain in 2009 heard was “official policy”); the killing of five Afghan children by Australian soldiers in 2009; and the 2005 massacre of Iraqi civilians by US marines in Haditha, gruesome evidence of which emerged last month.

Isolated incidents, all of them.

As were, no doubt, the much larger number of accounts of abuse, torture and murder by the democratic liberators occupying Iraq and Afghanistan revealed by WikiLeaks.

Manning, the alleged source of this material, is now facing court martial after being held in US military prisons without trial since May 2010. This included months in solitary confinement and being forced to stand to attention while naked every morning. 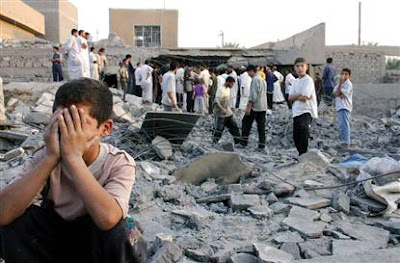 In an isolated incident, the United States military entirely destroyed the city of Fallujah in 2004, completely destroying more than three quarters of all buildings and slaughtering more than 1200 civilians.


But the most revealing thing about the latest scandal has been the way military figures have responded.

Retired US General Spider Marks, for instance, was quoted by ABC.net.au on January 13 as saying: "They may have slaughtered those guys and that's fine. You move off to your next mission. You don't do what we just saw."

No, clearly not. Slaughter is one thing — the civilised liberator knows that once you slaughter the natives you move on to your next mission, presumably slaughtering more natives. But pissing on the corpses of the natives you have just slaughtered is just not the done thing.

By all means, invade a sovereign nation, replace the brutal fundamentalist regime with a brutal fundamentalist regime, subject the population to a fresh decade of constant warfare, further destroy the poorest nation on Earth already ravaged by two decades of constant war, then slaughter those who fight back. But, for Christ’s sake, show some decorum.

ABC.net.au reported that, for his part, retired Australian Army officer Jim Molan insisted the incident “must be seen in proportion”. He said: “It’s wrong but this is nothing like Abu Ghraib.”

Trying to minimise an incident of abuse by comparing it with an even worse example by the same forces is not overly reassuring. He may as well have said: “You think this one is bad, hell, you should have seen 'em at Abu Ghraib! Woah, now that was some crazy shit!”

Meanwhile, key Western ally The Only Democracy in the Middle East (TM) proved its terrorist credentials with appears to be its latest assassination in Iran of an Iranian scientist (though the Iranian regime has also pointed the finger at the United States). Chemistry expert Mostafa Ahmadi Roshan was killed on January 11 in central Iran by a magnetic bomb placed under his car.

The US denies any role. After Israel first refused to confirm or deny its involvement, Israeli President Shimon Peres said it was not involved "to the best of my knowledge". But, really, if you were accused of blowing up some poor bastard with a car bomb, and you were innocent, would you respond to questions of your involvement by saying: “Well, I can’t really say for sure either way, but I don't think so, as far as I can tell.”

Actually, you would probably not be saying anything — chances are you'd be too busy being tortured in Guantanamo.

I am surprised democratic Israel even found the time to kill Ahmadi Roshan, busy as it's been reinforcing its apartheid-like social structures. Already in the new year, Israeli courts upheld a 2003 ruling that bans “most Palestinians who marry Israelis from obtaining either citizenship or residency” in Israel, AlJazeera.net said on January 12.

Of course there is a lot more happening in the world than just these atrocities. Last year was marked, above all else, by the explosion onto the political scene of ordinary people standing up against oppressive and unjust rulers — from Cairo to Madrid to New York and beyond.

It is worth remembering that when former dictator Hosni Mubarak's thugs fired tear gas on protesters in Egypt, people showed the cameras what was written on the side of the canisters: “Made in the USA.” It's a pretty safe bet the same thing was printed on the side of the tear gas canisters fired on peaceful protesters at Occupy Oakland in October — including the one that nearly killed Iraq War veteran Scott Olsen.

As we enter a new year, it is clear ordinary people share a common enemy — even if the enemy tries in vain to present a democratic, civilised face.

"What's best for the Western and the greed? Kill 'em all? Let 'em breed?" I include this song by The Drones about the horrors of war because I fucking can -- until the United States' government introduces its online censorship laws and destroys the internet as we know it.
at 1/20/2012 11:05:00 am