My article first published in this week's Green Left Weekly.


The day after the January 26 protests by Aboriginal people and supporters gave the media the sensationalist images of Prime Minister Julia Gillard and Liberal leader Tony Abbott fleeing under police protection, the Herald Sun's Mark Knight captured the image with a truly hilarious cartoon.

Gillard is being led into a car by police, chased by an angry mob of Aboriginal people, faces contorted with rage, waving their fists in fury. The PM quips: “Geez, if the Aboriginals had've put up a fight like this in 1788, we might not be bloody well here celebrating Australia Day…!”

It is one of life's truisms: jokes about genocide just never get old. I don't think I've laughed so hard since I read that famous comedic tract Mein Kempf.

Aboriginal people failed to stop an invasion that resulted in the extermination of possibly 90% of the original Indigenous population, and now they get angry? It is really quite funny if you stop and think about it. 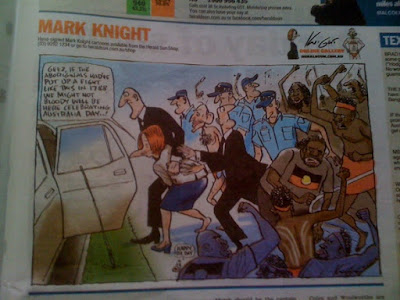 The cartoon says a lot about the systemic denial at the heart of any discussion about Aboriginal people in Australia.

First is the denial of what occurred at the protest outside The Lobby in Canberra.

The cartoon shows an angry mob surrounding Gillard and Abbott, protected only by police. But look at the pictures and footage depicting their dramatic exit.

How many angry protesters, bearing down on them, do you actually see? In most you can, at best, spot a couple of protesters in the background, looking on.

It is a long way from the scene painted by Herald Sun attack dog Andrew Bolt, who wrote on January 27 that Gillard was forced to “run for her life”.

The protesters were actually calling on Abbott to come out and address them over his comments that the Tent Embassy was no longer needed. Abbott and Gillard refused to talk with the protesters.

I just hope I never face any threat to my life more serious than Gillard did on January 26. I am yet to hear of a single case of anyone being killed by a robust discussion.

More significantly, the cartoon denies the very real Aboriginal resistance to European invasion that, in many places, lasted decades. In the wars fought across the continent from the late 18th century and well into the 19th, the invaders lost a bit more than one shoe.

Denying this resistance strips Aboriginal people of their real history and reduces them to passive victims.

But there is a very revealing twist to the question of denial. This cartoon, by making a joke of the invasion, actually acknowledges it took place.

Even this racist cartoon in a Murdoch tabloid is forced to accept that Aboriginal people had cause to resist invasion, even as it mocks their failure to defeat it.

This is a product of modern Aboriginal resistance, which has forced White Australia, however reluctantly, to confront the fact the nation was founded on dispossession and genocide.

The only reason this point is even acknowledged — amid self-congratulatory celebrations of how “unique” we are because, unlike anywhere else in the world, we have beaches, enjoy cooking food on hotplates, are fond of sport and don't mind specially brewed drinks with intoxicating properties — is because of the ongoing Aboriginal protest.

And a key symbol of Aboriginal resistance and demands for sovereignty is that institution Abbott is so keen to consign to history's dustbin: The Aboriginal Tent Embassy, which celebrated a remarkable 40 years of existence on January 26.

The Tent Embassy confronts denial with the reality of ongoing dispossession and systemic oppression Aboriginal people face — and the determination to resist.

"Terrorists dressed in uniform under the protection of their law. Terrorise blacks in dawns of fear, they come smashin’ through your door". The Drones cover Kev Carmody's true story of the cold-blooded murder of Davi Gundy, a 32-year-old Aboriginal man shot in his own home.
at 2/02/2012 05:26:00 pm