Life, CityRail and Shovels and Rope

I am going to write an epic novel all about a man whose train is four minutes late. Just four minutes late. Not very late. Just the exact amount of lateness to FUCK EVERYTHING UP. AGAIN. Thereby driving the man to leap off the unbearably overcrowded platform and sit on the tracks and contemplate the meaning of life in the four remaining minutes before the train puts him out of his agony.

It has a happy ending — the train is actually SIX minutes late, giving him a full two minutes more of contemplation! And in those TWO EXTRA MINUTES he contemplates some of the MOST AMAZING THINGS ever contemplated in the ENTIRE HISTORY of HUMAN CONTEMPLATION! And (SPOILER ALERT) in a FINAL TWIST, just as he stood up on the tracks to impart his wisdom to the platform overcrowded with sad, desperate people hating everyone and everything around them, to FINALLY let them know the TRUE MEANING of life, the TRAIN CAME and they ALL CHEERED FOR *FINALLY* THEY COULD FUCKING GO HOME!

I think I'll call it "FUCK YOU CITYRAIL". 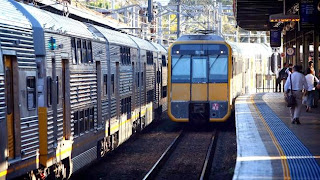 
In other news, I have decided not to bother following the news any more. Instead, when I wake up, I'll just get two large rusty nails and drive them straight into my eyeballs. It saves time, and efficiency is the new watchword according Our Overlord's Accountant Joe Hockey.

No longer can we can assume we are entitled to be depressed unspeakably by the news, we must take the initiative and stand on our own two feet and just imagine all the horrifically depressing things this bunch of neo-fascist reactionary racist misogynist poor-hating scum are getting up to.

Therefore I say thank christ for the likes of Shovels and Rope, the glorious husband-wife country duo from South Carolina. (I REFUSE TO USE TERMS LIKE "ALT. COUNTRY" AS THOUGH THIS KINDA SHIT IS SOMEHOW "ALTERNATIVE" AND NOT *REAL* COUNTRY! NOT PROPER OCUNTRY! JUST SOME SORT OF INDIE HIPSTER FEEBLE IRONIC STAB AT COUNTRY! BULLSHIT! THIS KINDA SHIT IS REAL COUNTRY! ALL THE POINTLESS CORPORATE-MANUFACTORED CRAP SHOULD BE CALLED "ALT. COUNTRY". I AM SORRY GARTH FUCKING BROOKS IS NOT COUNTRY! NOT COMPARED TO SHOVELS AND ROPE! NOT EVEN IN THE SAME FUCKING GALAXY!)

Here are a coupla tracks for ya all. No worries, buy me a beer sometime.


Well all this chasin after sunsets, all this shootin at the moon
Got us drinkin from the gutter pickin food out of the broom
Well it ain't hard to second guess yourself
When you're dressin up a wound
Ain't that the truth
That's the truth ...

So now there's grass, cocaine, alcohol, and pills
Yeah they might even drag you under or help supplement your bills
It just depends what you need worse, be it the money or the thrills
Well, I could use both ...

ALL THE FUCKING WORDS!

'And if that ones for the winner, this one must be for me...'

Yeah, here are ALL THE FUCKING WORDS.

Well the west coast was a desert
And New York City black
So I spent some time in Carolina
Make my money back
There's a trail of blood that trickles down from Denver to the sea
And if that ones for the winner, this one must be for me

Oh
Well there's this busy little corner
Half a mile down the road from where I live
Where all these beautiful women
Work the sidewalk for the little take and get
Oh it's like an escalator walkway
I just mind my own bus, make sure my money's here
Well I got this friend, he takes his money down there every day
When he gets done from work
He asks for Georgia cuz she's special,
She reminds him he's a man he has worth
Oh but I don't judge him cuz he's honest
Which is more'n I can say I've been since birth ...

So if you're led into a wasteland or made to stumble through the dark
You leave the cartoon color legacy or a common watermark
We always back the underdog because he's the only one we trust
And if that ones for the winner, this one must be for us
at 4/10/2014 11:21:00 pm