Australian for 'The People want an end to the regime!' 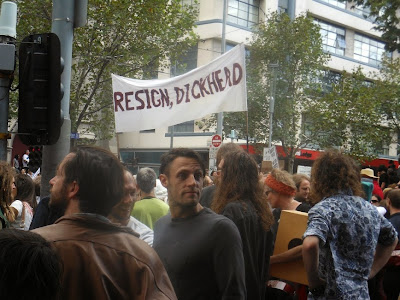 "It's Australian version of 'The People want an end to the regime'," said photographer and Alcoholic's Guide to Modern Life Melbourne correspondent Conehead the Barbituate of this banner at the Melbourne March in March rally against Tony Abbott's Reign of Terror.

Tens of thousands marched around the country over the weekend in many cities against the racist, anti-poor, anti-worker, planet-hating, corporate giant loving misogynist prick who rules this godforsaken fucking land. You can read a national round up of it all here, filled with like videos and shit, and see a fucking shitload of photos here.

Email ThisBlogThis!Share to TwitterShare to FacebookShare to Pinterest
Labels: Conehead the Barbiturate, March in March, the power of hate, Tony Abbott