Well, this is one fucked-up place... so here's five great live performances

It is near impossible to capture just how fucked up shit is in this country, let alone world. Great Barrier Reef? Oh well... well it was only getting in the way of exporting coal. Asylum seekers? Well, obviously we are concerned that they are being encouraged to take "dangerous journeys"... so we'll throw the desperate people that come here on small life boats, send them off the Indonesia to fend for themselves even though at least three people have died as a result. We had to do that otherwise they might have died.

And may the Good Lord have mercy on your poor, pitiful soul should all of this make you want a MOTHERFUCKING DRINK in this goddamn state of NSW.

And the rest of this goddamn motherfucking world ... well, what is there left to say? I could point out that 85 people control half the world's wealth while much of the rest are condemned to Hell.

But... I mean, I made my case some time ago that we serioiusly needed to find a decent sized wall for these fucking pricks, but did you goddamn aresholes *listen*? HUH? I even *tried to find a wall*. Goddamn you. 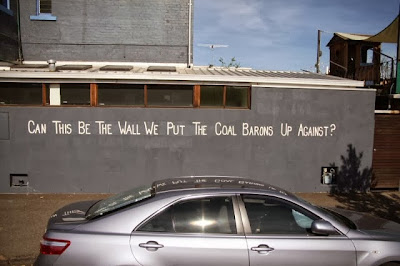 I even fucking suggested this wall for the goddamn pricks, you useless motherfuckers.

Well fuck. This is why God in His infinite mercy gave us music. There is not much better than live music done well, when a song swells with emotion and power until it seems it will explode. It is self-evident that such things are best actually experienced live. But, I have spent far too many evenings getting drunk and surfing YouTube to not know that there are some truly great, even breathtaking, life performances captured on film and uploaded there for our enjoyment.

So here are five great live clips. Trying to actually pick a "best five" would be impossible. This is a long way from that (among other things, I avoided Tom Waits coz once you go down that path, every single song will be Waits. You want some great Waits' clips, and who doesn't, I suggest my blog post Tom Waits' Top 20 Tearjerkers Of All Time.)

I simply chose five great live clips that I could think of right now -- and I can already think of some other great clips with no less claim to be on this list. These ones are great for different reasons -- the Springsteen clip is set on fire by Tom Morello's guitar solo; Janpis Joplin's astonoshing brilliant-but-raw vocal performance is out of this world; the Dubliners clip, as befits a folk song, brigns the story to life; and Kurt Cobain's shrieking is horrifying and spine-tingling in equal measures.

Anyway, the clips are below and, as ever, in a YouTube playlist.

'He was a sick man, he had murder in his heart...' Weddings Parties Anything were a glorious folk rock band that toured one end of this country to the other -- the type of band the closing of so many live msic venues has seemingly condemned the hiustory books. They developed a reputation for one of the great live acts of their day -- and this clips helps show why. The song is about the infamous case from 19th century Tasmania, in which escaped convict Alexander Pearce turned to cannibalism... and developed a taste for human flesh.


'Now history is a pack of lies, as any fool can tell.
So when I got down to hobart Town I told my story well.
But do you think they would believe a word I said?'

'The highway is alive tonight. Where it's headed everybody knows...' Tom Morello's guitar solo alone would be enough to make this re-imagined version of Springsteen's originally accustic tale of the "new world order", with its old world poverty and suffering, utterly electrifying. Add to that... well everything else about this performance, and you've got yourself a gem.

'Honey I know she told you she loved you much, much more than I did....' Well, really, this is how you sing a song. An incredible vocal performance in which Janis Joplin inhabits the song entirely. Every line is delivered like her entire future happiness depends on it.

'With their tanks and their guns, oh my God, what have they done...' This version by the Dubliners of a song written by Phil Coulter about his home town of Derry is a great example of how you perform a track about war and oppression. Coulter's autobiographical words capture the tragedy of British occupation of Ireland's north and the violence it wrought by capturing the way it actually affected people's lives. Luke Kelly sings it with real emotional power so that each line is a fresh heartbreak.

'I will shiver the whole night through...' This raw, hard-edged cover of the traditional song made popular by Lead Belly as "In the Pines", is haunting and unsettling until Kurt Cobain starts shreiking, at which point it becomes like a knife in guts. It is a very potent performance that is a fitting conclusion to Nirvana's groudbreaking MTV Unplugged acoustic set.

It is also, in popular mind, inevitably bound up with the fact the Unplugged album was released after Cobain committed suicide -- it seems to add extra gavitas to the performance and make a track like this even more haunting. But it is worth keeping in mind Cobain was not suicidal while he performs this. If he was, he'd have killed himself there and then, not spent a few hours in front of a crowd to record a show in which he did some of his finest live work.

What it is, rather than some inevitable swansong or pointer to the tragedy that was to come, is a sign of Cobain's talent and most of all, his potential. It is a sign of why his premature death was such a loss -- it showed what he was capable of. We can only imagine what he could have given the world had he lived.

'We're hanging here in an inch of our lives, from the day we're born till the day we die...' Shovels and Rope!!! Christ I love the glorious country folk duo that are wife and husband Cary Ann Hearst and Michael Trent.. Let no one accuse me of being *purely* negative... I end on this fucking heartfelt call to action to fucking DO SOMETHIG OF VALUE WITH OUR LIFES. Like you know.. finding a decent wall for all the motherfuckers...
at 2/05/2014 06:06:00 pm