Those fucking Arabs are doing it all wrong

Well, this year has sure gotten off to a bad start. So far, 2011 has caused your beloved blogger to fall into such deep despair I am still yet to do my post announcing the winner of the 2010 Carlo Sands' Person of the Year for Services to Humanity and Drunkeness.

How do I loathe the year so far? Let me count the ways.

First, some bastard thought a good way to cheer me up as we head into a new godforsaken decade would be to send me a press release from the Australian Bureau of Statistics that explained: “Beer consumption in Australia has fallen gradually but consistently since the 1960s ...”

Second, fucking goddamn Newtown bouncers. Seriously, just because we were pissed out of our fucking brains in the early hours of Sunday morning is no god damn reason to deny us entry into pubs to drink more.

Even worse was one of them was an Irish pub! An IRISH PUB! Do you know how distressing and demoralising it is to be rejected as too drunk BY THE FUCKING IRISH?!

Third, and worst of all, a bunch of fucking Arabs have decided they want to run their own fucking countries.

First Tunisia, now goddamn Egypt and there are suggestions this fucking wave of fucking Arabs fucking taking their own affairs into their own fucking hands is spreading to such places as Jordan, Yemen and god knows where else.

Frankly, this just proves how anti-Semitic Arabs truly are. This turn of events is going to make it even harder for Israel to keep insisting it is “the only democracy in the Middle East” without every person within earshot collapsing into laughter.

I mean, presenting Israel as a democracy is hard enough by itself without a bunch of rabid, Jew-hating fascists giving a display of popular power and participatory democracy in glorious revolutions that actually overturn dictatorships backed by Israel and the West.

This can only undermine the moral force of the Jewish state and gives its enemies ammunition. Popular revolutions in Arab countries to overturn US-backed dictatorships are a cruel anti-Semitic maneuver truly worthy of Hitler himself.

This helps explain why Israeli leaders has taken such a clear line against democracy in Egypt.

Another reason why this is such bad news is Arabs are supposed to be all Muslim, all fundamentalist and all terrorists. This state of affairs exists to allow Hollywood writers not to have to actually use their imaginations when inventing bad guys.

A secondary, less important, effect of all Arabs being fundamentalist Muslims terrorists is it enables Western governments to use racism to divide their own people and justify wars for natural resources on behalf of big corporations.

If ordinary people of the West actually come to view ordinary Arabs as ACTUALLY HUMAN like them, as having the same aspirations, the same values and many of the same struggles as them... well god help the Free World is all I can say.

And yet the mass movements in Tunisia and Egypt, by all accounts, are FUCKING SECULAR! Sure, the largest opposition party in Egypt is called the Muslim Brotherhood, which is a pretty good start you might think.

But, first of all, by all accounts they are not behind the mass protests and even abstained in the early stages. Also, it turns out they are actually pretty fucking moderate and EVEN RENOUNCED VIOLENCE back in the 1970s!

It is even worse in Tunisia, where the previously banned Islamic party Hizb an-Nahda came out and said they support women’s rights and do not support imposing Islamic law. They even formed a united front with secular democratic groups as part of pushing for democracy against attempts by remnants of the old regime to hijack the popular revolution.

I mean, fucking hell! What are the Arabs playing at now?

In Egypt, by all accounts, Muslims and Christians are marching together. And some of the sentiments are highly disturbing.

Watch the video below. Seriously, check out the protester at 0.45.

This guy has really let us down. And he seemed so promising! Dark skin and big beard? Check. Shouts really fucking angrily? Check.

Says "It doesn't matter if you are a Muslim, a Christian, or an Atheist! You will demand your goddamn rights! And we will have our rights, one way or another!"? FAIL!!!!

And aren't all the women meant be all downtrodden and shit? Then WHAT THE FUCK IS WITH THESE PICTURES? 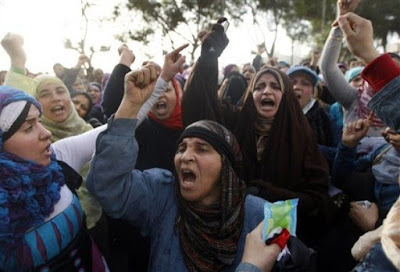 Oh for fuck’s sake, you are supposed to be DOWNTRODDEN!

This disturbing portrayal of ordinary Arab people as inspiring, brave, secular, freedom loving democrats totally undermines ALL THE HARD WORK Israel and its supporters have done, as a legitimate means of self-defence, of presenting itself as a small besieged nation amid a sea of dangerous Muslim fundamentalist terrorists.

How can Israel possibly defend itself under such circumstances?

But the worst thing, what really grates, is not even that these ungrateful bastards want democracy.

I mean, fair enough, no one likes being tortured or suffering extreme poverty while their dictators, fat with Western “aid” and loans, get even fatter by stealing the nations wealth.

But they are GOING ABOUT IT ALL WRONG!

This point was noted by hero of the free world and all round great guy Tony Blair.

(I believe the Egyptian people actually asked specifically for his opinion. There are widespread reports of people on the streets chanting “Mubarak out? Tell us Blair, please, what do you think?” and walls sprayed with the slogan “Tony where are you? We need your help!”)

In response to such calls, what Blair said, and quite rightly, is that it is perfectly legitimate for Egyptians to want democracy. Democracy, everyone but Israel totally agrees, is a lovely concept for Egypt.

But with the proviso, Blair added, that this move is “managed” properly so ensure a “proper democracy”.

I really shouldn't have to spell out what this means, but there has been so much confusion caused in the minds of ordinary people in the West who are usually fed a steady diet of racism and Islamophobia by this most uncalled for outbreak of popular uprisings that I fear I must.

It means, if they want democracy, the CORRECT procedure, as all freedom lovers know, is to FIRST OF ALL have your nation invaded by the United States and whichever other nations it can bribe and bully into tagging along.

THEN you get the invaders to install a puppet regime and privatise state-owned assets so multinationals can buy them up. All this should be enforced by tens, if not hundreds, of thousands of foreign troops.

The foreign troops really have two key roles: to brutally repress any opposition to the occupation (including by bombing weddings and gunning down foreign journalists) and to foment a civil war by arming sectarian militias to stir up strife where there was never any before, thus justifying the presence of the foreign troops needed to prop up the puppet regime to hand the resources over to the US corporations.

And then, if the Egyptians or any of these countries no one can find on a map and have only just discovered even exist, are patient, in about a decade or so their countries will be just as free and as prosperous as Iraq and Afghanistan are today.

THAT, loyal fans, is how democracy comes to the dark, uncivilised, bearded Muslim parts of the world.

It most certainly does not come from a mass uprising of the oppressed, defying brutal repression, overturning regimes the Land of the Free has painstakingly propped up with billions of dollars of military aid each year.

We all know what will happen if a government comes into being in Egypt responsive to the popular will.

Extremism will reign, possibly even going SO FAR in its anti-Semitic designs as to actually get rid of the giant fucking wall on the border with Gaza that quite rightly stops the Palestinians getting medicines, building materials, coriander and chocolate for their evil, terroristic plots.

We live in strange and disturbing times.

Images of anti-Semites from across the Arab world threatening Israel with their mass, popular uprisings for an end to dictatorships that have killed and tortured them for decades. These disturbing pictures were posted on site of the fundamentalist terrorist lovers’ central, Al Jazeera.
at 2/01/2011 12:57:00 pm