Don't these people realise Mubarak agrees with them?

Somewhere between 6-8 million people took to the streets of Egypt on February 1 to demand Egyptian President Hosni Mubarak, who has ruled Egypt via martial law for three decades, get out of office.

Now the thing is, Mubarak agrees with them. He is “fed up” with being in power.

Mubarak does not want himself as president either. I mean, who would?

He has reluctantly committed himself to staying on till September, but Mubarak has been telling anyone who’ll listen (which I think right now is pretty much the Obama administration, the Israeli cabinet, the Palestinian Authority, a couple of Arab kings and Tony Blair) that, like the protesters, he actually really, really wants himself to stop being president right now too.

It is just he can't leave the presidential office at this moment. He has locked himself in and lost the keys, or something.

And there is chaos. How could Mubarak possible abandon his beloved people in the middle of such chaos?

It is really hard to imagine. Because what is going to cause chaos in Egypt right now is Mubarak leaving.

The chaos on the streets of Cairo and elsewhere has nothing at all to do with him staying, despite him ignoring a week-and-a-half of the largest protests in Egypt’s history demanding he get on a plane and fuck off to a villa in Saudi Arabia. 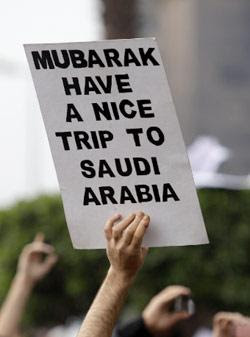 Mubarak insists he would love to, but the flights to Riyadh are all booked out till September.

It is the sort of awkward accidental meeting of someone you are in a dispute with that could happen to anyone — the type in which you never know whether to acknowledge them with a brief hello or just hurray on and pretend you never saw them.

A lot of people blamed the pro-Mubarak protesters, but how were they to know there were tens of thousands of anti-Mubarak types camped in Tahrir Square? It is like when walk into a party, stop in your track and whisper to your friend: “You didn’t tell me they would be here!”

It was an innocent mistake made by the roaming gangs of paid thugs and undercover cops armed with bricks, petrol bombs, knives and batons. Some were even riding horses and camels and found themselves in the middle of the crowd before they know what happened. 
In their shock, some bricks and petrol bombs were accidentally dropped from surrounding buildings and bridges on the protesters and before anyone could apologise for the misunderstanding, it was on for young and old.

You may be thinking that launching yourself on an unarmed crowd with petrol bombs and bricks and baton-wielding men on horseback, even by mistake, makes for a funny sort of a protest.

You may feel, perhaps, it comes across less as a protest and more as a sort of... violent assault.

But, remember, this is the Middle East and these are Arabs. They do things differently there, as the media like to tell us.

We can't impose our Western standards of “freedom of expression” on these people. Sometimes, this is just how those people express themselves. They are different from us.

This is exactly why Tony Blair is so concerned about the need to “manage” any post-Mubarak regime to ensure a “proper democracy”.

It is a very dangerous part of the world, so the West must step with care and be careful to avoid doing anything rash, such as stopping US military aid worth US$1.5 billion each year to the Mubarak dictatorship.

I mean, by all means “investigate” and “review” such aid in light of recent events. But let us not just stop propping a regime up because its people want democracy — anything could happen! Even democracy.

Meanwhile, at Tahrir Square, the poor US-funded army didn’t know what hit it and spent the day wandering around in utter confusion and shock before realising at least 13 people had been shot dead in a terrible accident in which some of the pro-Mubarak protesters’ automatic machine guns had accidentally gone off.

More than 800 anti-Mubarak protesters were injured, but I am sure a large percentage of these injuries occurred when they tripped over, and at least some of them walked into a door handle.

And no one was more surprised or upset at this tragic turn of events than the Egyptian government. Hell, they even announced an “investigation” into the incident!

They’ll get to the bottom of these terrible events.

And, rest assured, there really was no one was more disappointed and upset than Mubarak himself. Here he was, desperate to finally relinquish the power he is “fed up” with after 30 terrible years, and this chaos breaks out!

He can’t leave his people now, he just can’t.

It is always the way, these things happen at the worst possible time. My heart breaks for this dedicated public servant.

So, we now have a stand-off between a US- and-Israeli-backed dictatorship, whose figurehead is teetering, and more or less the rest of Egypt — a few paid thugs, security force members and public officials whose jobs depend on the regime notwithstanding.

Western governments and Israel are all in spin and frankly seem to be getting a bit desperate.

How desperate? The Obama administration even took up George Bush’s offer to give Mubarak a bell to help sort this whole mess out.

Bush said he volunteered coz Mubarak is “an old friend”.

Dragging in George Bush to help with your foreign policy is up there in desperation stakes with calling on Carlo Sands to run your AA class.

The details of the phone call are not known, but the New York Times said government officials told the media it did not involve Bush asking Mubarak to resign.

However, we can probably guess the conversation involved a phases such as: “Egypt. That’s somewhere in Iran isn’t it?”

I am not picking on Bush. It is an easy error for Americans to make. 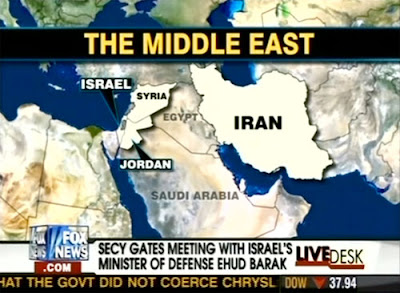 But never let it be said the Western media are racist.

Sure the British Independent is running eyewitness coverage by Robert Fisk — in which the veteran journalist betrays his terrible bias towards unarmed, peaceful mass demonstrations demanding an end to a dictatorship that has imposed poverty, corruption, censorship, rigged elections, torture and murder on its people for 30 years against small gangs of thugs seeking to kill said protesters.

But it is balancing it up with thoughtful commentary such as this by Julie Burchill: “It would be wonderful to think that what replaces Mubarak will be better. But here’s the thing about Middle Eastern regimes: they’re all vile. The ones that are ‘friendly’ are vile and the ones that hate us are vile.

“Revolutions in the region have a habit of going horribly wrong, and this may well have something to do with the fact that Islam and democracy appear to find it difficult to co-exist for long.”

I think we get the picture. Arabs in general, and Muslims in particular, are basically vile.

A fair point that needs to be considered and debated on its merits, without all this “political correctness” causing liberals, leftists and terrorist-apologists to jump to kneejerk reactions and accuse her of VILE RACISM.

Some terrorist-lovers might, in response to this useful contribution, suggest that if you replace the world “Middle Eastern” with “Jewish”, and “Islam” with “Judaism”, Burchill may be mistaken for Goebbels.

But some people are just totally unbalanced like that. 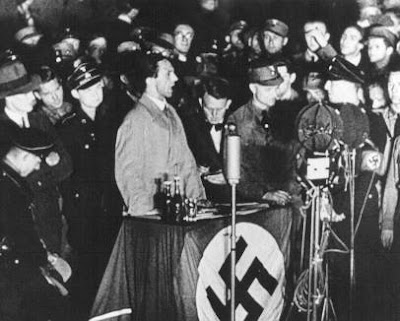 Actually, Goebbels confessed he thought Burchill had a point.


Despite Mubarak’s insistence he really wants to resign, it seems this thing is going to keep going with big demonstrations today.

No one knows how it will end, but, as there are reports that the protesters have started chanting for Mubarak to be hanged, it could easily have a very happy ending.


‘History doesn't happen it's made. How much did you get paid today? Pulse of the city stops, we're met by a thousand cops. Black's on Blue lines they cross and justice is a baton wound. You have the right to remain silent, we're gonna have to use violence’
at 2/04/2011 10:17:00 am

Email ThisBlogThis!Share to TwitterShare to FacebookShare to Pinterest
Labels: fuck off Blair, fuck off Mubarak, fuck off Netanyahu, fuck off Obama