7 Things We All Love About An Aussie Summer (Apocalypse Version) 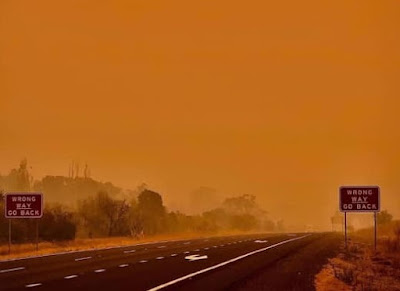 The Aussie summer is pretty special. It's one of the great things about this land we are so lucky to live in and yet somehow have caused horrific destruction to in just over two centuries of colonial setter rule, undoing tens of thousands of years of carefully developed environmental management by the continent's original inhabitants. How good is an Aussie summer? Here are 7 things we all love when the sun comes out, presumably as we can't really see it these days in several major citites. Number 5 is our fave!

Once, you'd only get a nasty chesty cough you can't shake in the winter months. Now, thanks to the monster fires in multiple states that are covering major metropolitan areas with dangerous smoke, we can cough uncontrollably all year round!

Christmas is a time to bring families together! Well, assuming they don't need to drive on any of the major roads heading into the nation's largest city in the most populous state that are shut down due to out-of-control fires that can't be put out and just grow ever-more destructive. Also assuming they didn't book a flight with Jetstar.

But if your extended family can make it to the same place at the same time, you can all enjoy staying indoors for health reason, and to avoid an unprecedented heat wave, and you can discuss how sore your throats are from the trip from the driveway to the front door.

As we can no longer pretend we aren't in the grip of a constantly worsening ecoholocaust fatally undermining the capacity of the planet to sustain human civilisation, a major trend this summer is "being consumed by existential dread". What does the future hold? Who knows but it looks pretty bleak! Luckily you are on holidays so you probably don't need to sleep any way.

One of the great things about summer is the chance to go out and socialise. Why not attend a climate emergency demonstration and meet a whole bunch of like-minded people also ignoring health warnings to stay indoors? Brave extreme heat as you march (and cough!) together to demand some fucking measures to tackle climate change, water theft and severe land mismanagement.

As an added bonus you can also see cops threaten violence against children in defence of a government of fucking criminals who should be tried in the Hague for crimes against humanity.

Who doesn't love the beach? This is one of the iconic "Aussie summer" joys, and this year it comes with a 2019/20 twist! Ash from the unprecedented mega-fires that cannot be put out until major rain (see below) is washing up on NSW beaches, turning the water black! We all love a new twist on a classic, and swimming in black water will remind of when you were a kid and you'd add food colouring to a bubble bath! Only this ash is quite toxic and will probably also get into NSW's already depleted drinking water supplies.

So it's been a super-hard year at work and you're finally on break, but you can't leave your home due to heat and smoke, or possibly a raging bushfire just round the corner. Don't fret! There is plenty of awesome things you can do in your hopefully airconditioned prison cell of a house. For one, try remembering what rain was like. What did it look like? What did it feel like? What did it smell like? This is a great mind game that will test the powers of your memory to their fullest!

For extra points, see how long you can go without panicking about the fact that even when these fires eventually stop, if they ever do, the drought has largely emptied water supplies and there are severe shortages in many places.

7) Flee for your life

You've worked hard your whole life and you've bought a wonderful "tree change" property that you just love in which to enjoy your well-deserved retirement. Only now it is on fire and you are fleeing desperately to safety as a life's worth of memories goes up in smoke and there is nothing the exhausted, volunteer firies risking their lives can do to save it.

Don't look back! Seriously, don't, just keep driving till you reach relative safety. Fuck.That was exhilirating wasn't it? No one said the Apocalypse would be boring!

So there you have it, these are just some of the awesome activities on offer to Aussies this summer! For an added bonus, why not try overthrowing not just this government but the entire degenerated capitalist system that has no solution but burning ever more fossil fuels, despite the major fossil fuel giants knowing deceades ago that this would happen! Then re-organise society along eco-socialist lines, combining social justice with ecological regeneration and a building a sustainable economy. No doubt, if you are like most Aussies, you'll have heaps of things on, but see if you can fit it in. Please! I'm begging you.

'The streets are screamig help me...'