Waiting For A Bus In Sydney: A Short Play 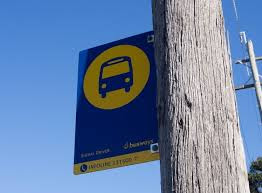 Sydney is a self-described "world class city" in which it is frequently impossible to move around. For instance, a Sydney Morning Herald headline from a week ago reads 'This is peak NSW': CBD streets closed after new Sydney tram breaks down.

There are many theories as to Sydney and its transport is as fucked as it is. One popular theory is "they've handed the entire state to private corporations and 'get rich quick'  developers' while massively defunding public infrastructure that you then flog off" are reasonably popular theories, as are "ARRGH JESUS FUCK YOU FUCKING PRICKS" (a quick poll from a random train station the other day).

In short, NSW in general is a strange combination of increasingly pure neoliberalism with ugly, sleazy nepotistic corruption overseen by incompetent gangsters.

Take for instance this totally true story that happened to me, that I have decided is best expressed in the form of a short play in a bid to "reach the masses", whose love for theatre is well-known. I hereby publish it below

I can't recall exactly where these events, but it was one of those places on the very outskirts civilised life. An isolated, nowhere land where dreams go to die and nightmares go shopping at Westfields. Which is all another way of saying it happened in "somewhere in Sydney".

[Carlo Sands waits at a bus stop somewhere in Sydney. There is no shelter, just one of those planks of wood stuck in the ground with a Sydney Buses logo sprayed on it. A small girl of about five approaches.]

CARLO: [looks at girl] Fuck off.

CARLO: [Looks at her, she stares back] Lucky for you I hate kids. [gives her a coin] Now fuck off.

SMALL GIRL: Thank you sir. I always keep a promise!

[She kicks him in the shins and runs off]

[A man walks up as Carlo rubs his shin while looking down the road for a bus.]

CARLO: [looks at him then back down the road, hand on shin] Bruised.

MAN: Let me guess, you had to pay 50 cents for the privilege?

CARLO: The little fucker got you too, did she?

MAN: She’s infamous round these parts. You’re not a local, clearly. No shin pads.

CARLO: You mean the little pigtailed princess violently assaults people all the fucking time? For cash? Why doesn’t someone deal with the little prick?

MAN: She’s the daughter of the local member. She’s got connections.

CARLO: What the fuck does she need 50 cents for then? Her family's fucking loaded.

MAN: The MP's a gambling man. Pokies. You can find him down the RSL most days losing our hard-earned taxes. When he runs out of coins, he sends his little princess out to do the rounds.

MAN: Bus? [Laughs] Mate, we haven’t seen a bus round these parts in years. That’s an antique you’re standing next to. Should be in a museum, but the council keeps it out for show.

CARLO: What the hell are you talking about? When’s the fucking bus come?

MAN: I told you, you’ll wait here for ever. You want my advice, you’d better start moving. You don’t want to get caught out here after dark.

CARLO: [Staring] You’re serious! Why has this shit hole got no fucking buses?

MAN: The MP's gambling debts. He acts in our name, so we gotta pay it back somehow. It’s only fair, they said. First thing they took was the buses.

CARLO: Oh, for god’s sake! Why don’t you boot the bastard out?

MAN: Oh c’mon! And let the other mob in? No one wins by replacing a mongrel with a street dog, that’s how we look at it ’round here.

CARLO: [looking down the street] But having no buses…

MAN: [looks at him carefully] You know, we used to have a few of your sort round here. Idealists. Most of them never did a day’s work in their lives, of course, but you had to admire them for their beliefs. But end of the day, you gotta play the game with the hand your dealt. If they’re selling oranges, no point dreaming up recipes for apple crumble.

CARLO: [turns to the man] Look, I’m not advocating a fucking insurrection! I’m not suggesting a free-love commune with magic mushroom handouts for the unemployed. All I’m saying is, this place needs some fucking buses!

MAN: [rubbing his chin, thinking] Hmmm… You could try walking to the next stop. Fair way though. And like I say, you don’t want to get caught out here after dark.

CARLO: What happens, someone head butts your elbow?

MAN: Very funny. Just take my advice. I’ve got better things to do than talk to arseholes. Have a good one.

[Looks at the app on his phone]

CARLO: [reads] Hmm, 4.10. The bus is pretty late. And my battery is about to go. [Looks at phone in frustration] And the battery's gone!

[A teenage boy walks past, headdown writing furiously on his phone.]

[Carlo walks right in front of the boy who, his path being blocked, reluctantly looks up.]

CARLO: Hey! [The boy looks up.] What time’s the bus come?

CARLO: Jesus Christ. Taxi. T-A-X-I. You fuckers heard of them out here?

TEENAGE BOY: Yeah, haven't you got the app? [He puts his head back down and walks off]

CARLO: [calling after him] My phone's dead! Hey can I borrow yours! HEY! Fuck!

CARLO: And now it’s getting dark …

WOMAN: [from behind Carlo] Do you always talk to yourself?

CARLO: [turns around startled to see a smartly dressed woman with a sly smile] Jesus, I didn’t see you. You here for the bus? I’m told they don’t exist.

WOMAN: [smiles] Locals will tell you that. You just got to know where to find one.

CARLO: And where the fuck would that be?

WOMAN: Well, you’re in the wrong place for a start. Far too obvious. To catch yourself a bus out here, you’ve got to think creatively.

[A silent pause as Carlo looks at her blankly]

CARLO: Do you want to give me a hint?

WOMAN: And what’s in it for more me?

CARLO: I’ll fund your election campaign to kick out the corrupt bastard who gambled all your cash away.

WOMAN: You mean my husband? He’s done more than a few good things for this place you know. More than most people appreciate.

WOMAN: He’s abolished waiting at bus stops. That’s why it’s so obvious you’re not from around here.

CARLO: Ok, just tell me where I can catch a fucking bus out of here so I never have to talk to one you asylum escapees ever again.

WOMAN: You couldn’t figure it out. I’d get moving, too, things can get nasty after dark.

CARLO: [looks in the direction she pointed, thinking reluctantly of the walk suggested] Why does everyone keep saying that? What happens after dark?

[No answer. He turns around but she’s gone.]

[Carlo gets a cigarette from a packet in his pocket and tries to light up, with the lighter failing.]

OLD MAN: [from behind] Smoke a whole bloody packet, it wont help ya. Tried it myself plenty of times in the old days.

CARLO: Yeah? Well I figure, if it doesn’t bring the bus out of here, at least I’ll die quicker. Either way I win. [Lighter fails again] Fuck!

OLD MAN: I remember the day they abolished the buses. Smoked a whole bloody carton. Waited 48 hours before it kicked in and I realised: they’ve finally done it, the bastards. They’ve gone and abolished the bloody buses.

CARLO: Look, someone has obviously slipped a tab of acid into my schooner. I’ve got better things to do than hang around here talking to a community of outpatients. Now, I realise none of you are exactly the strongest beer on tap, but can someone tell me, please, how the Hell to get out of this god-forsaken, loon-ridden, shin-kicking, pokie-addicted busless shithole?!

OLD MAN: Well… [thoughtful pause] I can tell you what happens after it gets dark.

CARLO: I can’t believe I left my machete at home. Look, I don’t give two flying fucks what happens after it gets dark! Look around you, you useless, old, busless bastard, it is ALREADY FUCKING DARK! Well, you know what? Fuck it! I give up! If I’m stuck here — you do have a pub don’t you?

OLD MAN: Take the second right, one block down.

CARLO: Coz I need at least 10 beers just to fucking start!

[Carlo storms off. The old man passively watches him leave. He shrugs.]

OLD MAN: Kids. At least in my day, we had some buses.

[The old man wanders off. The bus arrives, turns out it just been running a few years late.]