Wow! You are kidding me! A reality TV show judge got glassed??? Who'd have guessed?

If you are anything like me, you'd have greeted the news on Thursday morning that X Factor judge "Redfoo" had been glassed in an incident at a Double Bay hotel the night before with a resounding "who the FUCK is Redfoo?" followed rapidly by "WHY the fuck is Redfoo???"

Now I don't in any way endorse the glassing of Redfoo, I really don't. For three simple reasons:

1) Glassing is a barbaric practice.
2) I am against violence in pubs on principle due to the unacceptably high risk of booze getting spilt.
3) It means I now know who the fuck Redfoo is.

Of the three, the last is unquestionably the worst. I have long been aware I was not exactly "in touch" with much of mainstream popular culture, but never, until I learned of Redfoo's existence, have I been so grateful for that fact.

Now, it is not nice to glass someone. It really isn't. And sure, while you might say anyone who hangs out in Double Bay probably had it coming, it is still pretty damn unseemly, to say the least.

I just cannot help but think... I mean... come on... who among us has not, at some point in our lives, wanted to glass a reality TV talent show judge? I call any prick that tries to deny that a goddamn LIAR!

I mean *sure*, I'll agree, as was pointed out to me in a discussion on Facebook, that if you are gonna glass one of these bastards, then Kyle Sandilands is without question the most obvious and deserving target... but, then again, by all accounts Kyle was not in the pub!

(Also, by all accounts, Kyle is gonna die soon anyway so why waste a decent glass?)

Admitting that is not in anyway to endorse the actual act, but you know, before we rush to condemn the attacker, let us all recall Jesus's wise words -- that before we judge another, we should try walking a mile in their shoes.

I mean, we might not approve of this bloke's methods, but if we found ourselves 15 schooners the worse and suddenly our goddamn pub was taken over by some prick with really stupid hair, ridiculous oversized glasses WITH NO LENSES IN THEM and some variety of costume a drunken five-year-old would feel embarrassed to be seen in ... well COME ON! Who among us can honestly say that, faced with the sheer HORROR of it all, in a sudden desire to be rid of the SMUG, PRETENTIOUS and TOTALLY TALENTLESS SHIT THAT HAS SUDDENY ENVELOPED OUR PUB... we may not have decided to take matters in hand?

It is wrong to do so. Of course it is. But that doesn't mean you can't understand where the impetus comes from. 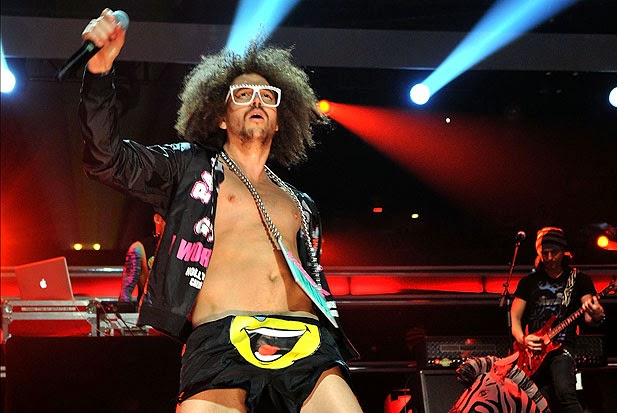 See, in researching this blog post (the sacrifices I make), I now know FAR MORE about Stefan Kendal Gordy, who for some truly inexplicable reason calls himself "Redfoo", than I ever wanted.

It is not just the fake glasses or dumb costumes, this is a guy who is famous coz he is the son of someone who meant something in popular culture -- the guy who founded Motown Record Company -- and whose own contribution has been to form some horrific group called "LFMAO" (get it???) with his nephew.

And yes, as research, I actually subjected myself to some insanely ridiculous clips, like the one below.

He's sexy and he knows it.

I even watched a full performance of one his "songs". Warning: it features the opening ones: "The Foo! The Foo!"

Further lines include: "I'm laid-back! I'm feelin this! Tonight's the night and I just wanna let it go! Hit the play back, I know your feelin this, c'mon baby, lets get ridiculous!"

But The Foo goes on!!! I know what you're thinking! You're thinking: "Where can The Foo go from here??? He has NAILED the whole 'It is a party and I like parties' thing. .. Surely there is LITERALLY NOTHING else any grown adult could possibly want to say on the topic???"

But that is where you'd be wrong! For the Foo explains:

All the time I be seeing you at school,
And you so fine I just had to play it cool
You blow my mind, all the crazy things you do
I see that you wanna act a fool so baby, lets get ridiculous!

YEAH! HE BE SEEING YOU AT SCHOOL!!! That is like really cool and not in any way creepy despite the fact that "The Foo" actually like turns 39 in September and, if he was at school, it would be as the geography teacher, the gardener and/or the local peodophile.

I mean, just watch as much as this clip below as you can stomach and then see if it is any mystery HOW Redfoo ended up glassed.

'You could be my new thang'

Now I know the justification for all this is it is deliberately and consciously cheesy and knowingly OTT.

Except I think "The Foo" plays the "let's make it really bad and pretend it is a joke" card... because he is actually just really bad.

And I don’t think his sexism is some sort of ironic act. I just think he is really sexist. Because, on available evidence, "thang" is literally how Redfoo refers to women. So for instance, when he was glassed he was, by various accounts, surrounded by a number of women. But not by his own account.

No, by his own account, he was "sitting in the back area with my mates, surrounded by some thangs". You get it? Some “thangs"!!! IE: SOME WOMEN!!! THIS GUY IS A CHARMER!!! 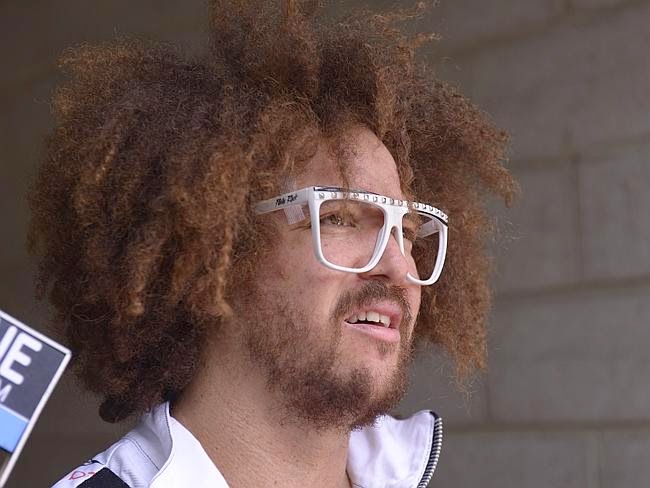 Did I mention the guy has no lenses in his glasses?

The Foo took to twitter not long after the attack to claim: "Jealousy is a hell of a drug."

Look, maybe. But also, Redfoo, maybe you are also just some middle-aged man in a band with your own fucking nephew who wears stupid glasses and performs totally creepy songs with sexually suggestive lyrics involving school students.

Doesn’t mean you deserve to be glassed, maybe. But also, maybe you probably don’t deserve to be on national TV and also... let’s be frank.... you should probably not be left unattended around young female school students. I mean, I am just going by your own words here, dude.