The Todd Carney Show Trial and the NRL's piss-soaked hypocrisy

For controversial sporting bans for violating “common decency”, forget Luis Suarez and his four-month ban from all football-related activities after the Uruguayan striker decided to taste a little Italian. If you want a truly outrageous, even disgraceful, penalty for a sporting star, it is hard to overlook the sacking of rugby league player Todd Carney.

Carney was given his marching orders by the NRL's Cronulla Sharks after a photo emerged on social media of Carney in nightclub toilets engaged in an activity that had nothing to do with the sport, any crime, or even any harm being committed against anyone at all, except, perhaps, for Carney's own sense of dignity, which by all available evidence, was pretty thin on the ground anyway.

True, the supposed activity was especially attention-grabbing -- the photo purportedly showed the 28-year-old halfback urinating directly into his own mouth in the dunnies of some club called Northies after Cronulla got slaughtered by Manly.

(And, surely, losing to Manly is the real crime here... I mean rugby league is not my game, but I might not grasp the fucking point of a “scrum” beyond giving players a chance to shove their head up other men's arse without having their sexuality questioned, but even *I* understand the importance of beating those over-privileged North Shore Tony Abbott-backed Manly bastards.)

The result was Carney was tossed aside for that greatest of crimes for major sporting codes and clubs -- the crime of generating embarrassing headlines.

No one has stopped to ask whether, if Carney's idea of a good time is pissing in his own mouth in some dodgy nightclub dunnies, that is really a matter for him. He wasn't asking for society to grant him permission, or even to pretend to understand what seems a pretty fucking weird fetish.

He was just a bloke standing at the urinal of some shit club getting snapped while trying to piss into his own gob. 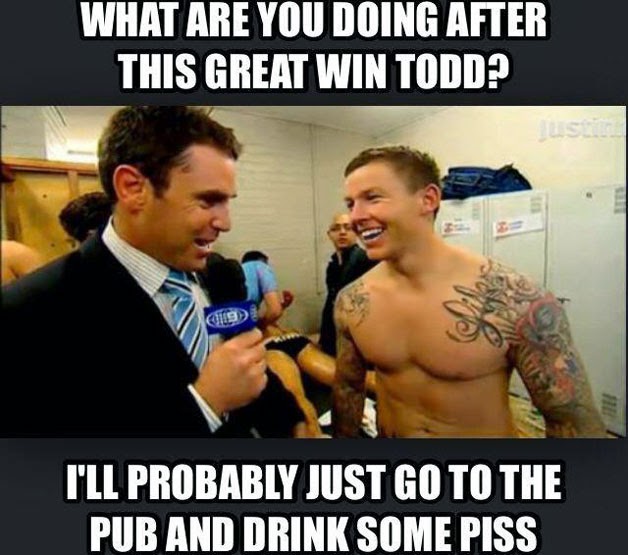 We all have our own way of unwinding.

Worse, the guy who took the photo, who said “I went into the toilet, found Todd there, he asked me whether I had heard of 'The Fountain’,” actually clarified that “the urine never went into his mouth”.

It seems it was “just a prank”, a “party trick” designed to make it look like he was pissing into his mouth. Much like, as his manager helpfully explained, “when people stand in front of the Leaning Tower of Pisa”. You know, so it looks like the tower is their dick.

Look... no one has ever accused Todd Carney of being in anyway classy or even vaguely highbrow, but if being a bit of a gross dickhead was grounds to sack professional sports players, well fuck, there'd be so few available for selection, I could probably get a run on the half forward flank for my AFL side, the goddamn Essendon Bombers (and actually, given the combination of a seriously shit forward line and the threat of ASADA suspensions over illegal supplement allegations, I am half expecting a desperate phone call from Bomber Thompson anyway).

True, Carney has some form. He has been repeatedly done for drink-driving and got done for driving dangerously without a licence (while allegedly drunk). He has even been accused of causing harm to others by setting fire to some poor bastard in a club in one case and even pissing on a bloke in a different club in another.

And yes, I know that last case seems to indicate something of a urine fetish, but at least in the recent case, he was only pissing on himself! Surely this is progress for which he should be congratulated!

Now, OK, I will grant you, on a scale of injustice between 1-100, Todd Carney not being allowed to run around a pitch in tight shorts wrestling other thick-necked boofheads struggles to even reach a single digit when, at the same time, our own fucking government jails more than 1000 children indefinitely in isolated hell holes for no crime asides from belonging to families forced to flee repression.

But on the scale of hypocrisy, it is through the fucking roof. Because what is so outrageous, so unutterably disgraceful, is that the NRL does have a real and widely documented behavioural problem... and it has nothing to do with urine at all. It is found in the repeated allegations against NRL players of serious acts of violence against women -- including many accusations of rape.

And I know of no case in which allegations of rape or bashing a woman has led to the immediate and direct sacking of a player. If there is such a case, it is a clear exception. The rule is the club, and the NRL, forms ranks around the players and tries its hardest to make the issue disappear.

Carney commits no crime and hurts no one -- but gets sacked. But, as a Mamamia article entitled “Hey NRL when will you ban players who bash women?” points out, a petition campaign was started in 2012 to try to convince the NRL it should actually terminate the contracts of players found guilty of domestic violence – of which there were two at the time.

And as to rape, the allegations, frequently of a gang rape variety, have really piled up over the past 15 years or so.  In each case, the cry from the club and code is the players deserve to be considered “innocent until proven guilty”.

But really, even without looking at the documented difficulty women have in getting rape allegations proven through the courts, we don’t not need to dwell on any particular allegation to get a clear, unambiguous sense that their sheer number, featuring many players from several clubs, indicates a serious fucking cultural problem among professional rugby league players. 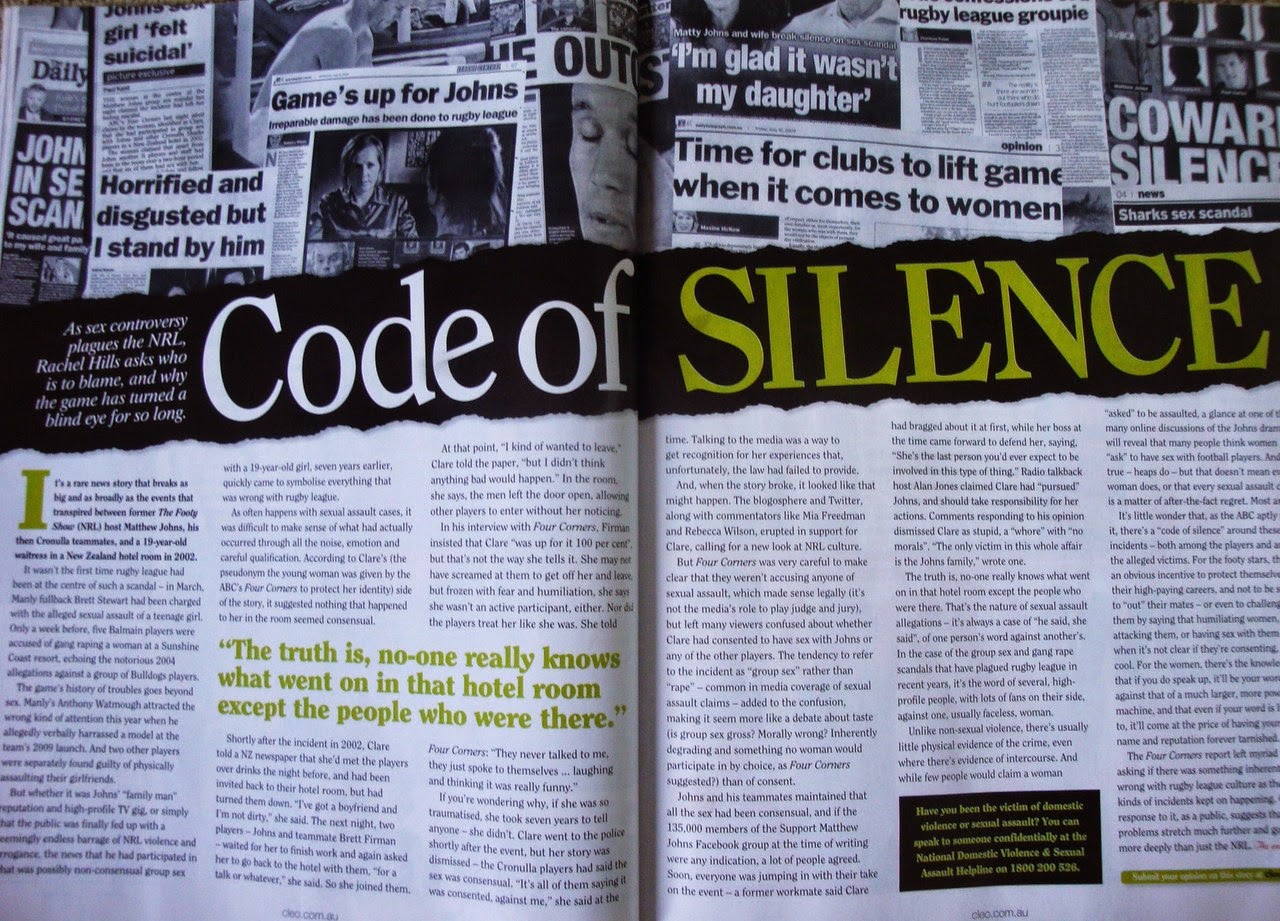 And this is what is so outrageous about the Todd Carney case. It is that the code and club lost their shit over one stupid photo in which no one was hurt and it seems to have been staged anyway, while doing worse than nothing over what is clearly a deeply engrained and widespread culture of violent misogyny.

The NRL and individual clubs happily ride roughshod over gang rape scandals involving their players. NRL clubs have even selected players to play the very week they were publicly named as alleged rapists.

If you are alleged to be involved in a gang rape, not only is your career far from finished, as Carneys seems to be. You can even look forward to a successful high-profile media career. Can’t you, Matty Johns?

And that fact is 1 million times more sickening, more stomach turning and more utterly, unspeakably foul than anything Todd Carney could ever do to himself with his own bodily fluids.