I don't know if it is true this world is going to Hell in a hand basket. I don't know what means are being used, exactly, to carry this goddamn fucking world into the fire-ridden pits of Hell.

It strikes me, however, that a hand basket would be impractical. Unless it was a really FUCKING BIG hand basket.

And that raises the obvious question of where a hand basket big enough for all the shit going to Hell could possibly be found.

And, if it is a really fucking huge hand basket, is it fair trade? Cos that sounds like a lot of starving African villagers, whose nations have been raped by the IMF, working some pretty fucking long hours.

I suspect it is more likely to be New South Wales' CityRail that is responsible for the travel arrangements, which would explain the overcrowding and delays.

Let us review the evidence, and it really is not very good.

The horrific slaughter of Afghans by their civilised occupiers bringing democracy continues -- as does the persecution of those seeking to expose the war crimes.

And as if that was not enough bad news, latest figures show -- and tears are streaming down my face as I type this -- that beer consumption is down in Australia.

Yes, beer consumption is at a 62-year low in this country. The last time less beer was consumed in Australia, the prime minister was Ben Chifley and he hadn't even gotten round to smashing the miners' strike by bringing the fucking army into the coal fields.

That year was 1947 and the country suffered post-war scarcity issues.

The average consumption per person of beer over 2009-10 was a mere 4.56 litres of pure alcohol coming from beer!

This demoralising statistic is utterly pathetic and embarrassing. To give a sense of how far we have fallen as a nation, in 1974-75, the figure was 9.2 litres per person.

And what is the government doing to reverse this trend? Where is the stimulus package providing incentives to average citizens it increase their consumption?

At the very least, if they are too tight for that, where is the fucking public awareness campaign?

An example of the type of badly needed public awareness campaign to reverse the frightening drop in beer consumption that this government refuses to invest in.


No. The government is moving in the *exact opposite* direction.

You see, in these depressing stats, I was pleased to note *one* area of improvement.

Well, more fucking fool me for trying to find a bright spot.

It seems our benighted government -- which seems on a crusade to make alcohol consumption as difficult as fucking possible for its citizens -- also took note of the same statistic.

Their response was reported in the media today. And, even given the crypto-prohibitionist moves this government has already implemented, it is shocking.

The government is seriously considering a proposal that could see the price of cask wine quadruple.

Yes, they want to dramatically raise the price of goon. They want to end this country's proud tradition whereby every citizen has the *goddamn right* to cheap wine!

From the four litre casks of Morris Dry Red to your more fancy two litre casks of Yaaumba Reserve Cabernet Shiraz for the more discerning customer, you can get your goon in bottlos across the country for, if not a tenner, then a twenty with a fair chunk of change.

But for how much longer?

Federal health minister Nicola Roxon has agreed to the development of the concept of introducing a legally binding "floor price" per standard drink.

No wonder beer consumption is down and wine is up.

But rather than doing the fucking obvious and *lowering* the price of beer, they wish to *raise* it for wine to the level of our overpriced beer.

And this godforsaken nation already some of the highest prices for alcohol in the world!

What the fuck are teenagers going to drink? What are impoverished uni students going to do? Or workers who just want something plentiful to put in their glass at the end of a shit day?

Will anyone ever make up a huge saucepan full of mulled wine at a party in this country ever again? 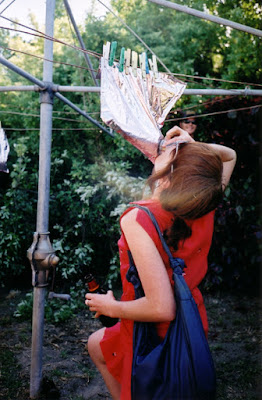 A thing of the past for all but the rich? The 'goonbag on the washing line' was one of Australia's few proud traditions.


You can forget Islamic fundamentalists and "illegal immigrants", this is the greatest threat to our way of life since this *same fucking government* declared four standards drinks to be binge drinking.

And that wasn't even a fucking law -- just the propaganda campaign to set the groundwork for shit like this!

The inventor of the goonbag, South Australian grape grower Thomas Angrove who died aged 92 just last year, must be be doing pirouettes in his grave.

(Our greatest-ever inventor and he didn't even score a knighthood -- which is just another reason in favour of becoming a republic.)

Let us look at the justification for this horrific idea.

Dr John Boffa said the government should not wait for a review but implement the plan now. He said: "We can cut self-harm, cut suicides and cut homicides by doing it now."

Really? Coz this proposal certainly makes this blogger vacillate between suicidal and homicidal tendencies.

Dr Boffa piles insult upon insult, being quoted as saying: "What would change is the price of awful cask wine that no one other than young people and heavy drinkers go near."

It is hard to know where to start, but let us unpack everything wrong with this statement.

First, what an elitist and judgmental fucker.

Second, what the *fuck* does he expect this nation's teenagers to drink?

They have to drink something or how will they learn alcohol's joys? For christ's sake, WON'T SOMEONE THINK OF THE KIDS?

And I want to say to Dr John Boffa: "YOU USELESS GODDAMN FUCKING HYPOCRITE!"

He grew up with cheap goon to get pissed on and now he wants to deny a new generation the same privilege!

And I will bet what is left of my liver that, somewhere in the world, there's a photo of a passed out 15-year-old John Boffa in a park with goon bag for a pillow.

C'mon John, why not be more precise and say, "and heavy drinkers TOO POOR TO BUY MORE EXPENSIVE BOOZE".

You know, unlike politicians who are famous as one of the biggest-drinking sectors of society -- but on the expensive shit they pay for with OUR FUCKING TAX DOLLARS!

So, the plan seems to be that now only the better off in this society get to destroy themselves at their pleasure in order to numb the pain of existence in this hellhole they have the gall to call a society.

Sure, the better-off like to get wasted, and who can blame them? But they have less of a *driving need* to kill the pain than others.

And so the cruel irony of this plan is it makes it much harder for those that really *need* a decent drink to actually get it.

I mean what sort of society do we actually in live here?

Well, this lovely country is one in which the government moves quickly, in response to public outcry following a devastating expose on a current affairs show, to take action against the horrific conditions in which cows are exported from Australia and slaughtered in Indonesia.

Of course, the treatment of the cows is not particularly pleasant. But this is *the same government* that keeps human beings imprisoned *indefinitely* in horrific conditions, without being charged let alone tried of any crime, in what are little more than concentration camps in which incidents of self harm occur daily.

Some of them, they even seek to deport back to Afghanistan to risk being slaughtered in ways no nicer than the cows -- a country declared "safe" by the government despite the ceaseless atrocities committed by the occupying forces, of which the Australian military is part.

Others locked up despite committing no crime are to be sent to Malaysia.

This is a nation that has never even signed the international convention on the rights of refugees, so as not to even bother with the hassle of violating it.

A nation in which refugees, like those our government is going to hand over, face horrific torture -- including regular incidents of caning so severe that it rips away the victims flesh.

This form of torture, according to Amnesty International, was meted out in Malaysia to 34,923 foreigners between 2002-08.

But the victims of such treatment are not cows -- they are only FUCKING HUMANS who happen to be FUCKING POOR AND DESPERATE. So FUCK THEM!

This is also a country in which we are subjected to governments that like to hand down budgets that kick the poorest and most vulnerable, such as the disabled, single parents and the long-term unemployed.

But a country that *also* has shock jocks and tabloid press that scream bloody murder about the same budget for supposed brutal attacks on those who earn 150 grand a fucking year -- who, we are assured, are most certainly NOT rich.

*This* is the country we live in and they think we DON'T NEED A FUCKING DRINK???


‎"Mummy, what's cheap wine?" will soon be the question asked in cars all over the country when the "classic rock" stations play this song by Australia's most famous pub rock band. That is assuming our government doesn't ban the song for "encouraging an unhealthy culture of binge drinking".

Do you wish to help resist? You can donate to the Carlo Sands Fighting Fund to help take on the crypto-prohibitionists, by helping ensure I can stay drunk enough to write this shit, via the PayPal button conveniently provided on the righthand column.