Oh for christ's sake, this is too much. On Spain, climate change, Estonia and being ignored by Cannes.

I blame society. I am watching the fucking world and all its reality TV stars and wondering just what the fuck is going on.

First of all, what the hell is wrong with the bloody Spaniards?

Seriously, every since May 15, all these fucking Spaniards have been out on the streets demanding a "new system" and taking over all of these plazas in the centre of cities and towns like they are public property or some shit. We are talking 60 or more of these fucking plazas.

Youth leading the way of course, all going on and on about "corporate domination" of politics and society and the need for something they call "real democracy!"

They especially don't like the fucking banks. Oh, the government had to "bail-out the banks" and there was a fucking debt crisis and there is "austerity" against ordinary people.

Well of course there fucking is. The banks can't bail themselves out -- they are all fucking broke. The money has to come from somewhere.

I mean, what do these idiots think would happen if we had no banks? Where would we keep our cash? I mean, you only have to look at how rich some Spaniards are -- they don't have enough mattresses to stuff their millions of euros under. It is just not practical.

I really cannot see why this is an excuse for thousands of young people to go stand in public squares and wave their hands in the air like fools. 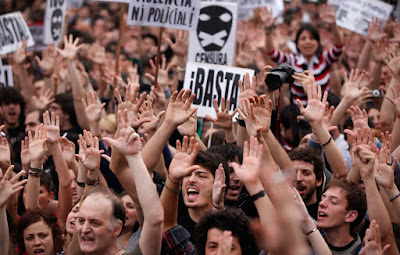 Crazy Spaniards wave their hands in the air in Barcelona's Plaza Catalonia.


A lot of commentators have pointed to the role of the huge level of youth unemployment in this debacle -- which is running at an official rate of more than 40%.

No doubt they are right. The lazy gits have nothing better to do with their time than complain about the capitalist system that has given them *so much*.

And now it has spread to Greece.

The banks just don't need this shit, they have a government to run.

We all know who we can blame for putting the idea in their heads to take over public squares: the goddamn fucking Egyptians.

I warned this whole "Arab Spring" thing would end in tears. You just don't walk around bringing down governments *carefully installed by the Land of the Free* just because they torture you and enforce policies that cause widespread poverty.

Where the hell would this end? I dare say the destruction of Israel. 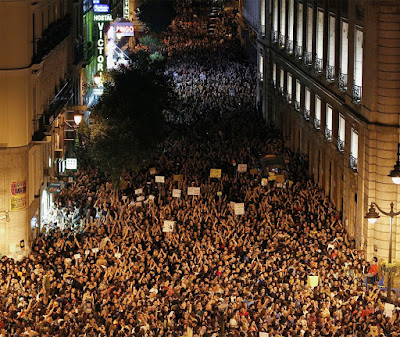 Thousands of Spaniards take over Madrid's Puerta del Sol square, oblivious to the fact the banks are too busy with the business of governing to deal with their petty complaints.


As if that is not enough, we have fucking a bunch of pricks running around going on and on about the threat of human-caused climate change. Some sort of mobilisation is planned around this on June 5.

In this context, it has been left to none other than the Catholic Archbishop of Sydney George Pell to *once more* express scepticism about climate change and whether it is human caused.

It is especially impressive as this is not a man usually renowned for his scepticism.

This is a man who believes the world was created 6000 years ago and that Jesus's mum was a virgin.

He believes that Jesus could turn water into wine and cure leprosy -- and what is more, that Jesus didn't even *patent* his fucking cure and flog it off to a pharmaceutical corporation like any sensible person would, but continued to administer it FOR FREE!

I always found that the least believable part of the New Testament.

Pell believes the world was created in six days by some invisible bloke who lives in the sky and he sent his only son to go and tell everyone the GOOD NEWS that if you believe this shit you get to enter paradise when you die and spend your time with everyone else who thinks the best way to spend a Sunday morning is listening to some old git like Pell tell you fairytales as opposed to BEING FAST ASLEEP till the hangover wears off.

And that when they, quite understandably, killed Jesus for insisting on sprouting this shit, he rose from the dead three days later and ascended to this paradise -- but fear not he is still in all of our hearts if we only let him in.

No doubt this accounts for the high rates of heart disease in so many predominantly Christian nations.

Through Pell's church you can even *to this day* day drink Jesus's blood and eat his flesh via magically transformed wine and wafers. It does not sound healthy.

Pell believes all this and *still* has the good sense to question the so-called evidence provided by the *entire* climate science community who keep insisting, in countless studies, that the situation is worsening and drastic action is needed.

You've got to admire him for that.

Perhaps even *more* to the point on this crucial topic is US Republican Congressman John Shimkus, who is seeking to chair the powerful House Energy Committee.

His take is quite simple. A November 10. 2010 Daily Mail article informs us that Shimkus "insists we shouldn't concerned about the planet being destroyed because God promised Noah it wouldn't happen again after the great flood".

"Speaking before a House Energy Subcommittee on Energy and Environment hearing in March, 2009, Shimkus quoted Chapter 8, Verse 22 of the Book of Genesis.

"He said: 'As long as the earth endures, seed time and harvest, cold and heat, summer and winter, day and night, will never cease.'"

So let us not be concerned by the melting of the polar icecaps because God PROMISED! 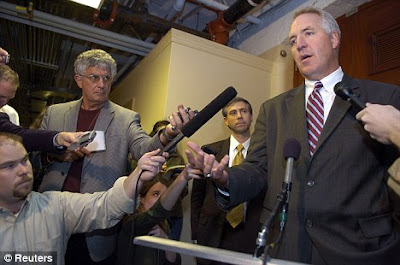 Republican Congressman John Shimkus, who is seeking to chair the powerful House Energy Committee, explains we don't have to worry because God promised Noah we'd be alright.


All I can say is this is just as well, as the organisers of a June 5 national "climate action" marches are backing a government plan to deal with what is supposed to be the most serious threat humanity has ever faced by promoting a policy that -- thank christ -- will actually leave corporate power alone and lead to an emissions trading scheme.

You know, along the lines of the one in Europe that has not only failed to reduce carbon emissions but actually provided the rich with a new opportunity to generate more wealth through wild speculation and widespread fraud.

And this is badly needed, what with the whole subprime gig going belly up in the states back in '07.

I would have thought all this was bad enough, but no. We had to have a weekend, the one just past, that was missing the only fucking reason to actually have a fucking weekend in the first place.

Yes, in Round 10 of Australian Football League, the prime competition of the Greatest Game on this Godforsaken Planet. Essendon Football Club *did not even play*.

They had some sort of so-called "bye" -- and this after the travesty the week before when, through some sort of malicious conspiracy, the Bombers were beaten by *fucking Richmond*.

And as if that is not enough, I am stuck in Sydney in a fucking state whose main game is some sort of stupid sport I can't even *begin* to understand.

As far as I can see, from my brief time trying to watch this "sport", it involves two lines of lumps of beef running into each other, falling down, then repeating the process for 90 minutes.

I can't figure out who these fuckers are they find to play the game, but, going by appearances, they all seem to be pub bouncers. And god knows I hate bouncers -- what with their moralistic stances on "dress codes" and "states of intoxication".

And this is what they offer up as way of entertainment is this goddamn town. 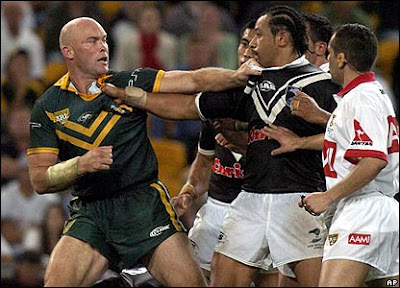 Pub bouncers confront each other on a field.


And last Wednesday, I was told, they had some sort of "big game" on. I couldn't really figure out what it was all about, but someone told me they were going for Queensland.

People often ask me what the fuck I have against Estonia? They say surely it is just a discreet little place in Eastern Europe with one of the lower populations of any EU nation, reasonably high standard of living and, what is more (they always add) the highest levels of internet freedom in the world! What is my problem?

Let me just say this: If you should be approached by an Estonian who challenges you to a game of Ice Cricket, turn around and run away as fast as your legs will take you.

Yes, Ice Cricket. It is a real thing and the fucking Estonians are responsible for it. Estonia's claim to fame is to be the self-proclaimed Home of Ice Cricket.

What it is, should you have never heard of this monstrosity, is, basically, a game that is just like normal cricket only *much much colder*.

I am told the Maroons won on Wednesday and should it have been against Estonia I can only say *thank fucking christ*. 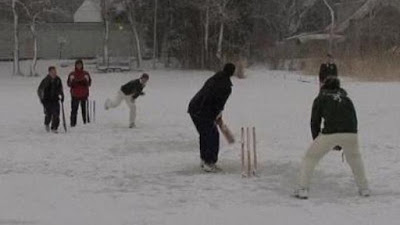 The fucking Estonians have a lot to answer for.


And yet, the horror *does not even end there*.

You will not believe this. It truly takes the fucking cake. But I swear to God it's true.

Conversation III: This Time It's Personal -- the latest film by Carlo Sands -- was *completely ignored* by the May 11-22 Cannes International Film Festival.

Not even a fucking invite to attend, let alone a fucking Palme d'Or or *any prize at all*. Not even a Lifetime Achievement Award.

And then, to make matters *even worse*, a further indignity on top of so many others, there was an *incident* involving Ben, world renowned as a co-writer of the Conversation series. Or "script assistant" as I prefer to call him, as it makes him sound less important.

The details are murky, but let's just say it involved a sudden decision by Ben mid-last week to go hitchhiking up the NSW coast.

Somehow, this got out of control when he ended up in Queensland at a Blues festival at Hell on Earth, also known as the Gold Coast.

This is where he was on Saturday morning, stood on the side of the road desperately seeking to flee the Gold Coast, when I received a text informing me: "Qld police really don't like the hitchhiker".

So I was a little surprised when three hours later Ben walked into the room in Sydney.

It seems a man of the law caught him in the act of requesting a lift from strangers. They don't like that of sort of thing up there, so Ben was duly fined $40 and driven to the airport with the heavily implied suggestion that he get the fuck out of the state ASAP.

Ben says he called in a few favours and promptly flew back to Sydney.

Now, no doubt you are thinking exactly what I thought when I heard this tale: how is it possible for some random cop on the beat to treat one so closely associated the Conversation films in such an atrocious way?

How did it come to be that such a person could be RUN OUT OF A FUCKING STATE?

I asked Ben whether he told the cop who he was. He said he was legally obliged to.

And he was *still* run out of Queensland! They truly are backwards, uncultured hicks up there.

It really is enough to drive a man to drink. Luckily, that is where I was *just* heading anyway.

(Speaking of which, check out the PayPal "Donate" button just on the right... getting drunk enough to write this shit is not cheap, but it is *so* important.)

You can view for yourself the artist achievement of Conversation III and the scale of the outrage perpetrated by Cannes and the Queensland cops.