You know, sometimes when you look around the world, everything can seem really fucking dark -- and not just at night.

The goddamn oceans are screwed, Europe's economy teeters in the balance over Greece's inevitable debt default with only the question of whether they can force the already poor and overworked Greek working class to carry the fucking can *again* and avoid potential immediate collapse so as to collapse a little bit later when all the cuts and austerity drive the Greek economy further into recession, and, in Australia, the level of public debate in recent times on refugees has been so hysterical it has made EDDIE FUCKING MCGUIRE seem a voice of reason.

Yes, Eddie "Who Wants To Be a Millionaire -- WELL FUCK YOU I ALREADY AM!" McGuire. Eddie "Western Sydney is Falafel Land" McGuire. Eddie "Let's Make Homophobic Jokes About Athletes at the Winter Olympics" McGuire.

So insanely outrageous, so divorced from reality, so mindnumbingly racist is what passes for "discourse" in this godforsaken country over the "threat" of being "invaded" by a few hundred "boat people" each year, that it was actually left to McGuire to call for calm in a Herald Sun article against "the boring, predictable, racist-tinged appealing to the worst side of our nature and the rekindling of fear in the populace led by our politicians and news media".

McGuire said, in a startling and perhaps unprecedented recourse to actual facts in the Sun, that we don't need "scare-mongering tactics over an issue that for the year so far has seen fewer people arrive than sit on one morning train to Flinders St".

McGuire complaining about racist populism must be like hearing Goebells tell Hitler to "steady on, mate" because some of his anti-Jewish rhetoric seemed a bit extreme and what does he have against gypsies anyway?

But that is where this country is at. It is up to the president of *Collingwood* to call Australia out on racism.

Collingwood Football Club being the one whose former president, Alan McAlister, declared in 1993 that Aboriginal players were alright "as long as they conduct themselves like white people ... As long as they behave like human beings..."

And it was Collingwood captain Tony Shaw who, in the aftermath of that incident, publically defended racist abuse as "part of the game".

This is what this fucking country has been reduced to. Lectures on racism from the president of Collingwood.

So, good news comes as a welcome relief and it doesn't get much better than a heartwarming tale of *another fucking royal wedding*.

Just when you thought every inbred parasite on the fucking planet lucky enough to not be French in the early 1790s had blown their broke nation's budget on stupid hats and champagne in some pointless feudalistic ritual, they found a nation far from broke for a brand new fairtytale.

And what a fairytale Monaco's royal wedding on July 2 was!

There cannot have been a dry eye in the tiny little statelet on the French Riviera as Prince Albert II wed South African swimmer Charlene Wittstock, now "Her Serene Highness the Princess of Monaco".

There is nothing like a tale of true love to improve the world's gloomy mood!

Becoming a princess is, as we all know, every little girl's ultimate dream! And the romantic story of Wittstock marrying her prince is a mighty blow to those cynics who think dreams don't come true!

On the spot, the London Telegraph's Henry Samuel sets the beautiful scene:

"The couple's glittering religious wedding drew crowds of thousands to the Mediterranean principality on Saturday and the guest list included a host of heads of state, European royals and stars of the fashion and sports world."

And the blushing bride all dressed in white?

"But sources cited by Le Journal du Dimanche said the former Charlene Wittstock, 33, tried to take refuge in her country's embassy in Paris when she went to the French capital in May to try on her wedding dress.

"Instead palace officials confiscated her passport and persuaded her to take part in the weekend's nuptials.

"Later that month she also tried to escape during the Monaco formula one grand prix, they alleged.

"Then, last week, she allegedly had her passport confiscated en route to Nice airport via the helicopter service that runs regularly between Monaco and France." 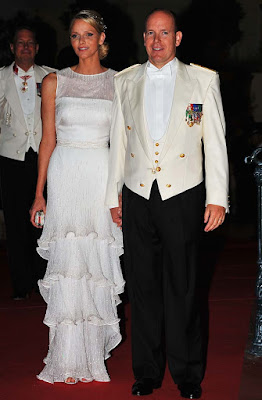 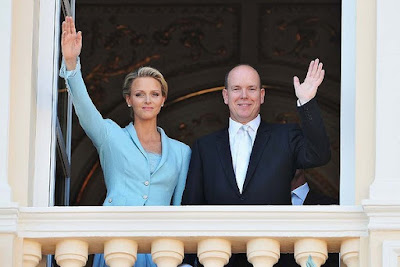 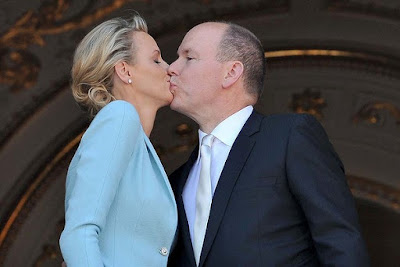 Even when on show before the entire world, the deep, heartfelt love they share shines through.


This is a tale of true love. The true love Monaco's 35,000-odd residents have for their tax-free status.

Monaco is a desperate little statelet that that exists as a tax haven for the mega-rich, but badly needs its ruling prince to produce a male heir or else the statelet will revert back to French rule -- and French tax rules.

But it seems their saviour, Charlene, was not happy by some recent news. Samuel refers to Monaco "policy advisers" who are said to have confirmed that the prince has fathered "two illegitimate children, one already born and one on the way".

But did not the princess-to-be not realise? Those kids, even if they *be* male, are *illegitimate*, born out of the sacred bonds of marriage, and therefore completely useless for the principality!

No, if Monaco is to continue being the tax-haven, grand-prix hosting paradise the mega-rich have come to love, they need a woman who has gone through a wedding to get knocked up as many times as takes for a baby boy to be born. By the prince, preferably.

Her Serene Highness may have had second thoughts about a loveless marriage of convenience to a middle-aged, balding, toad of a prince, but Monaco was not about to stand by and let such a fine breeding specimen escape...

And so they "persuaded" the rather desperate princess-to-be to go through with the marriage ... by foiling her three breaks for freedom and confiscating her passport.

No wonder they all look so happy in pictures of the crowds at the wedding. They fucking caught her before she escaped.

A forced marriage. How quaint! It is reassuring that in this day and age, there are *some* who still believe in tradition. 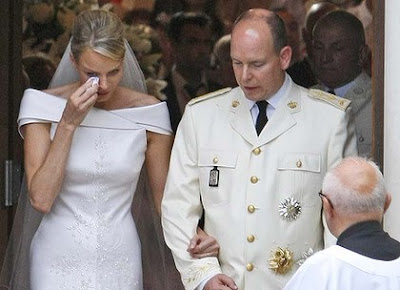 "So, as soon as the ceremonies are over, we can begin our duty of trying to produce a male heir ... now come on, darling, don't cry in public." 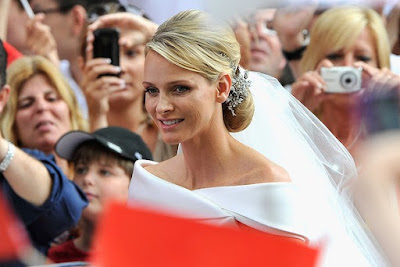 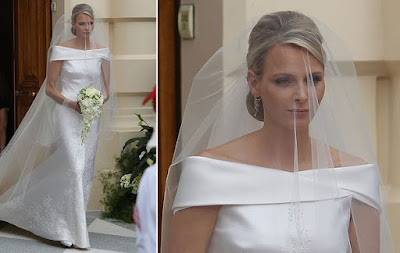 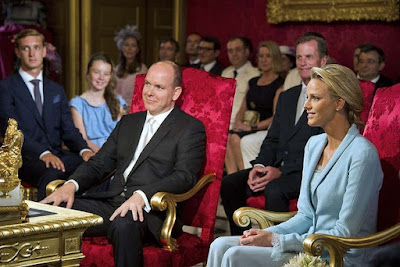 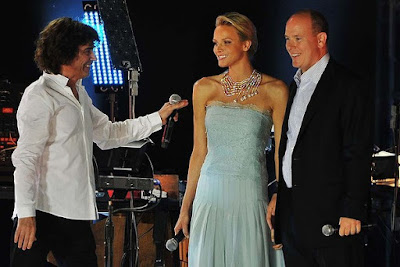 "Don't *you* even fucking *think* of touching me! What is it with Monaco and ugly middle-aged men?"