Even Rob Schneider was ashamed

I guess look back on 2008's highlights. I shook my brain for hours, but as we all know it was a pretty quiet year where nothing much of any significance really happened. Not a year to make the history books that's for sure.

Of course, with one exception. An exception that shook the world.

As anyone not from the planet Neptune knows, there was an extremely significant event that occurred around two months ago that grabbed the planet's attention. There were tears, laughter and disbelief.

It took to the very pinnacle a member of a long downtrodden sector of society.

Readers of this blog may not be aware, as I was not, but in all of the excitement about the unprecedented situation of an Australian Idol winner with a small amount of talent, there was another vote around the same time that flew under the radar.

It has been brought to my attention recently that apparently there was a presidential election sometime in November in the USA.

The news surprised me, as I had assumed the US had done away with such things to free up time for the corporate elite to concentrate more fully on persecuting the immigrants who do all the shit work; filling jails with young Black men who then do even shittier work for free (thus making decent headway into reversing the outcome of the Civil War); and destroying the world economy.

Apparently they actually had a vote and so hated are the Republicans, and so so ludicrous their candidates for Rulers of the World, they didn't even bother trying to steal it this time.

Desperate for change, the the US voters elected a Black man to oversee the Empire that has been killing Black people since its inception. The world is a strange place, sometimes. Perhaps they feel direct experience will help with efficiency.

Still, people seem relieved to see the back of the last guy.

It wasn't just that he was a war criminal responsible for millions of deaths in Iraq and Afghanistan, torture all over the world, or a massive shift of wealth to his super-rich friends ("his base").

Hell, that is expected. Not for nothing did US intellectual Noam Chomsky observe that if every US president since WWII was tried according to the principles at the Nuremburg Trial, they would all be hanged.

It is that he was so fucking incompetent at it. Seriously, the only thing he got right during his entire years was when he ducked in time.

If there is one thing the better off sections of the US cannot stand, it is an incompetent representative of the ruling class whose policies of extending imperial rule have failed ingloriously. Failure makes the US look foolish. And an Empire does not like to look foolish.

A very common complaint by many Americans during the reign of Emperor George Bush II was just how damn embarrassed it made them to be Americans. Especially when traveling to Europe. (The Europeans are also imperialists, of a less successful variety. But they pride themselves on a certain sense of style.)

Many US people who can afford regular overseas travel, have been, in ever greater numbers, speaking out about how ashamed the Bush regime has made them.

I have personally always been a little disturbed at the tendency of people in the wealthy industrialised nations to express the shame whenever the government installed through a farce of a democratic process, whereby two parties with identical policies, backed by the same oligarchic corporations and endorsed by the mass media owned by the oligarchs, proceed to do commit some shocking act of gross oppression on, well, on the oppressed.

What the fuck were you expecting?

We saw the same phenomena in Australia with the Howard government's inhumane and racist immigration policy, which they merely continued from the preceding Labor government. This made many middle class liberals ashamed to be Australian.

Which always raised the question: why now? What pride is there in a nation founded on genocide that was always governed for the rich?

I never saw the point of feeling shame about a government I never voted for, supported or expected to be anything other than utter bastards. But, perhaps I just have no shame.

Just how hated Bush had become was brought home to me when, after the elections, US "comedian" Rob Schneider was on an Australian talk show hosted by that bloke who used to play Uncle Arthur and he spoke out bravely about how embarrassed Bush made him to be an American when traveling in Europe.

Like so many of his compatriots, he explained was forced to pretend to be a Canadian or even an Australian (cue a basic phrase said in an bad Australian accent that received inexplicable laughter from the studio audience).

How bad was Bush? Even the star of Deuce Bigalow, Male Gigalo was ashamed.

As if the initial Deuce Bigalow outing was not terrible enough, Schneider also stared in the sequel, Deuce Bigalow, Euopean Gigalow, that featured a promo poster of Schneider with the Leaning Tower of Pisa in the background, cleverly positioned so it appeared to be emerging from his groin.

When Schneider visited Europe, he was less ashamed to be known as the bloke who pretended, in order to sell a truly crappy film, that the the Leaning Tower of Pisa was his penis than he was of George Bush's presidency.

That is how terrible Bush's crimes were.

And, of course, with the election the US voters struck a blow against prejudice and did something unprecedented and inspiring — something few believed was possible in this day and age. They handed the most powerful office in the entire world to one of the most marganisled social groups.

Yes, stunning as it may seem, President-elect Barack Obama is a smoker. 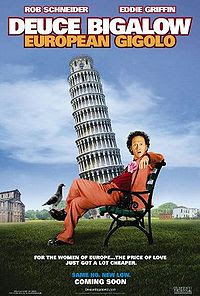