The notorious Courtney Marie Andrews
It is easy to assume the doomsayers are wrong about the dangers we face from unaccountable multinationals controlling huge chunks of our lives. That they need to chill with their weird conspiracies about corporations "cynicaly weilding power for their own malign ends" or "not paying taxes".
And then you get with a 3-day ban for posting a song and some lyrics from Grammy-nominated country folk singer Courtney Marie Andrews (who is touring Australia in March) and you realise dystopia's not just here, it's got a long-term lease and hasn't even forked out for the bond! 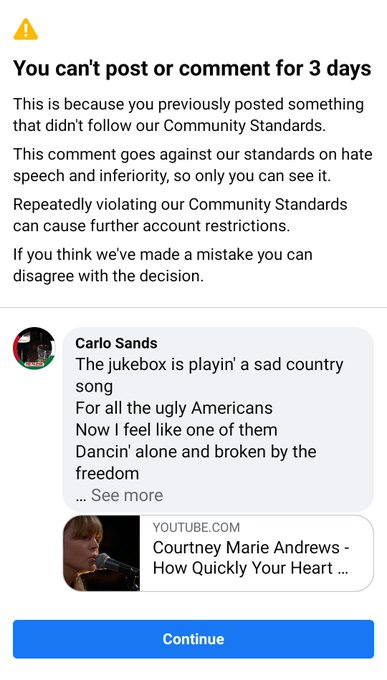 For context, my 3-day ban was on the heels of a 1-day ban for some equally harmless comment misunderstood by whatever AI systems Facebook employs. This presumably caused its robots to then scour other recent comments and the phrase "ugly Americans" tripped it's "UNACCEPTABLE!" wire.
I appealed both bans -- my heart filled with hope that my cry for justice would be heard! My pleas of innocence were cruelly denied.
I faced a choice.
For myself, I'm not bothered. I've been banned before and no doubt will face the censor's wrath once more. I'll cope without Facebook for three days, I've got plenty of beer.

Courtney Marie Andrews of Phoenix, Arizona may be known for many things (mostly tender lyrics over sweet-yet-melancholic folky tunes), but "violating community guidelines" via hate speech is not usually considered one of them.
A line must be drawn. If we have no freedom to get drunk and post sad country songs on Facebook for our so-called friends to politiely ignore, then what have we become?
So I took it to the highest court available: Facebook's Oversight Board.

This secretive body, to which you can request taken-down content be restored, gives you 2 weeks to issue an appeal that will be considered final. Also, they explain they probably won't even see it as only "a small number" of appeals are even looked at.

It's like Mark Zuckerberg looked around for the world's most absurd appeals processes and settled on the Australian immigration system.

Yet I made my case with the passion and self-belief of a man convinced that appeals to the ways quality songwriting in the country-folk tradition profoundly advance humanity cannot fail!

Asked to explain my appeal, I exposed the ridiculous falsehood and slander directed towards Courtney Marie Andrews' 2018 track "How Quickly Your Heart Mends".

Yes the Community Standards say hate speech includes speech directed at groups of people based on "Physical appearance, including, but not limited to: ugly, hideous."

But it is obvious this is not about all Americans, just those the character in whose voice she is singing views as ugly in a metaphorical sense. And that the character explicitly includes themselves in that category! Do Facebook AI programs not even understand what metaphorical means?

I did not hold back! Asked to explain the social significance of the content I wished restored, I quoted no less an authority than Tom Waits himself (who's "Downtown Train" Courtney Marie Andrews has so beautifully covered):

“The world is a hellish place, and bad writing is destroying the quality of our suffering.”

It is an objective fact that surely even the Oversight Board must recognise that Courtney Marie Andrews does the opposite!

The ball is now in their court. I do not wish to prejudice judicial procedings so I will simply state: if justice is not rendered in ths case then all honest-hearted global citizens must reluctantly conclude that, despite it's public statements, Facebook does not indeed have our best interests at heart.

Finally, because I believe people should make up their own minds, I remind you that Courtney Marie Andrews is touring Australia in March. For now, here is a playlist of her songs, starting with her most offensive ever. TRIGGER WARNING: Some are heartfelt.