It's not all bad, well OK a lot of it is, but still here is audio of me ranting on a stage 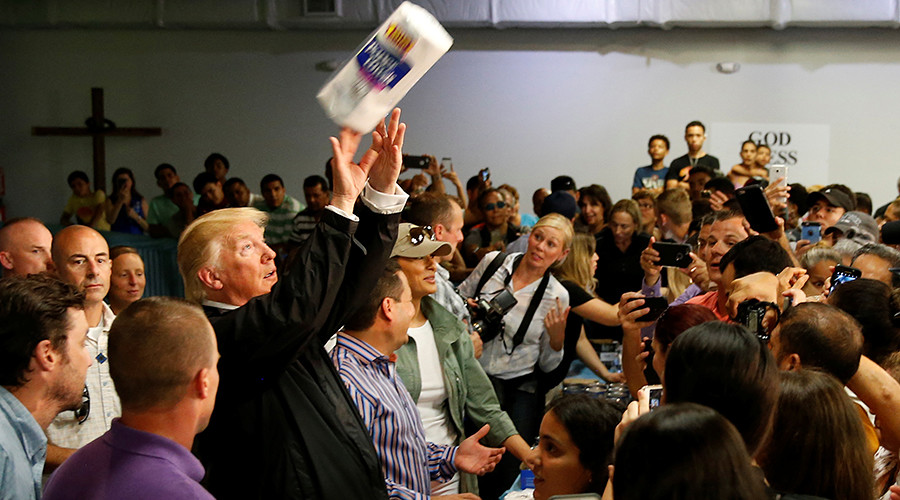 Well, a lot sure seems to be happening in the world.

I am sure like me, when you saw Donald Trump in Puerto Rico cheerfully lobbing paper towels at a crowd of people in that devastated Caribbean island, your first thought was: "Holy fuck, I'm also out of paper towels, what kinda natural disaster worsened into an extreme humanitarian crisis by a combination of climate change and extreme ongoing colonial exploitation do I have to organise to get the US commander in chief to chuck a few of them my way?"

Looking into the matter, it turns out the answer is "a pretty fucking bad one". Like we are talking a Category Five Hurricane so bad it caused Trump to stop golfing and actually visit after just two weeks, which is the highest level of severity meteorologists recognise.

Of course, Trump did more than that in the aftermath of Hurricane Maria. He also wagged his finger at the Puerto Ricans, largely without electricity, clean drinking water ad with a gutted health care system already weakened by the savage austerity forced on the island by their US colonial masters that is unable to deal with potential disease outbreaks, and declared, as only Trump could:


“I hate to tell you, Puerto Rico, but you’ve thrown our budget a little out of whack ..."

This is a bit like if you've been stabbed by some random bloke, and your mate, who is driving you to the emergency department before the last of your life leaks out into the growing bloody pool on the passenger's seat, points out that the cost of the petrol for this trip is really stretching his fortnightly pay check, despite you knowing for a fact he has more than half-trillion worth of high-tech weaponry in his backyard.

Say what you will about Trump, but he has a brutal honesty that is almost refreshing. No hypocritical tears for the dead or pretence that the US state and or its corporate masters give a flying fuck for the half-drowned, already-screwed people of the US's "I Can't Believe It's Not a Colony" colony of Puerto Rico, which has been a "not-colony" colony since the US won control over the Caribbean island from the Spanish in the 1898 Spanish-American War.

In all-too-predictable news, almost two weeks after Puerto Rico was hit by the super-storm, the US was hit by another mass shooting, one of the deadliest in recent decades (though not in US history, as the Lakota could point out).

Such a tragedy has many repercussions, one of which is Australians enter a new round of smug self-congratulation about how, unlike those nutty Yanks, we solved our gun problem after the 1996 Port Arthur Massacre when automatic and semiautomatic weapons were banned and we've not see a repeat of that horrific event.

No doubt this is to Australia's credit, so perhaps while we are on a roll having successfully managed one single positive  reform of note since 1996 about we may take some pride, perhaps we might, I don't know, consider not torturing innocent people in isolated prison camps, then abandoning them to their fate in impoverished Third World countries that cannot deal with them?

I know sometimes change is slow, and we're all a bit exhausted from spending the past 21 years patting ourselves on the back for the unprecedented (if you exclude large chunks of the world) wisdom in not letting nutcases have access to major weapons of death except when they serve in the SAS in Afghanistan,

But in the act of congratulating ourselves, we by-and-large missed yet another Black Death in Custody. Tan Chatfield, a 22-year-old Aboriginal man, died in custody at the Tamworth Correctional Centre on September 20 under what may politely be called "suspicious circumstances". This is only one of hundreds since the 1991 Royal Commission into Black Deaths in Custody laid down more than 300 recommendations to stop more Black Deaths in Custody — which have gone ignored and unimplemented.  In 2013, a review of deaths in custody by the Australian Institute of Criminology found that the number of Aboriginal deaths in custody had increased over the previous five years.

Still, how wacky are hose Yanks with their automatic rifles and paper-towel throwing presidents eh?

Meanwhile, Tony Abbott, the ex-and-wannabe prime minister of the nation one of the highest per capita carbon emissions in the world,  gave an absurd speech in Britain, questioning whether climate change was real before suggesting that possibly it might be a good thing regardless, because more people die in cold than heatwaves (yes he fucking said that).

Abbott clearly sees himself as "Australia's Trump", so it is just as well he's not, I dunno, heading a government in Queensland greenlighting and providing taxpayer funds for a large corporation's planned mega-coal mine that will condemn the great Barrier Reef to death and drastically worsen the global warming crisis, which, just to prove I know how to shoe in a callback, contributed to the strength of Hurricane Maria that devastated Puerto Rico.

No, that would be Queensland's Labor government, a government of a party that actually accepts global warming, but presumably just figures this planet is screwed so let Adani hasten our fate.

But it is not all bad! Not only is their push back on protests on these things (such as the growing campaign against Adani), no, even better! Here is some dodgy audio of me ranting on a stage, recorded on the first night of my solo show Inspired? at the Sydney Fringe Comedy festival! (Warning: it starts abruptly, as I had forgotten to turn it on, so just begins with me yelling about something...)

I am very kindly providing this to you all for free, coz that is the kinda guy I am. Just a decent guy and not at all desperate to get my angry voice out there for some sort of deeply disturbed personal reasons I have never investigated for fear of what might surface. However, the show was a fundraiser for Green Left Weekly, so if you wish you can make a donation to the publication, which relies entirely on supporter donations to survive.