'Go on back to Greenville': Lucinda Williams and the art of a 'fuck you' song 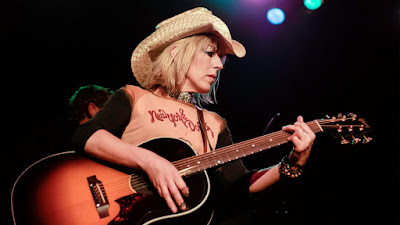 Songs telling people who deserved to be told to get fucked to "get fucked" has a long and proud tradition in popular music, from Dylan's "Positively Fourth Street" (dripping in venom, with its sneered opening line "You gotta lot of nerve to say you are my friend", before really laying into the unnamed backbiter), Carly Simon's "You're So Vain", as devastating a sustained put down as it is an insanely catchy song, to English pop singer Lily Allen's entire 2006 debut album Alright, Still.

One with more than a few songs on arseholes is US bluesy country singer Lucinda Williams, and like with Simon and Allen's savaging of fuckboys who had it coming, she clearly speaks from experience of having known her share.

One of her finest examples is "Greenville", off her 1998 classic Car Wheels on a Gravel Road, which contains more great songs than any album has a natural right to include.

The song lacks the bombast of many other examples of the genre. It feels understated  — but the impression is superficial. It is quiet, stripped back and builds slowly, but in its poetic simplicity, it finds its mark just as surely. Each verse further strips away the layers of the man in question's pretensions, revealing an intolerable arrogance that spreads pain in its wake.

The man, and there is no doubt it is a man any more than it is a real man Williams had the misfortune to become entangled with, is told repeatedly to go back to Greenville. This is the name of towns in several US states, and it could be any of them, but it is one of them.

Bellow is the album version, with Emmy Lou Harris providing backing vocals, followed by Williams singing the song on the BBC TV music show Later... With Jools back in 1999.

Now, I know what you are thinking. After everything in this post so far and with no obvious segue, can I still force in a plug for my solo show at the Sydney Fringe Comedy festival, "Inspired?" on at the Factory in Marrickville on September 27 & 29 and October 1?

The answer is no. Obviously I cannot actually elbow in a reference to my show, which attempts to grapple with how to stay inspired in a world so horrific while also telling amusing jokes and is a fundraiser for Green Left Weekly and at which you can book tickets here.

It would ridiculous! Worse, to even try might be seen as an example of the sort of arrogant men that Lucinda and others slay in their songs!