Jesus and the Rabbit: The True Story Behind Our Easter Traditions


It's like Christmas all over again. All the fun from a mass consumer frenzy aimed at propping up a tottering late monopoly capitalism in a death spin is taken away by politically correct libtard elitist cucks doing the bidding of ISIS.

For instance, I used to love hot cross buns until all of a sudden supermarkets would only sell those Halal ones with the cross replaced by "DEATH TO ALL INFIDELS" written in Arabic.

But some people still think the whole idea of a “War on Easter” as part of a general assault on Western Judeo-Christian traditions is a farce, because what the Hell has Jesus got to do with a rabbit or eggs, what has a rabbit got to do with Jesus or eggs, and what do eggs have to do with fucking chocolate?

Too few people know the real story, due to unfortunate editing out of the New Testament, but below is the actual truth. 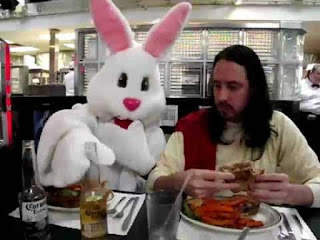 One day, Jesus of Nazareth was walking home from Damascus, having drunken a little too much of His own Water-Into-Wine Homebrew(™) and eateth too little of His Own Brand of Freshly Baked Bread(™) in order to line His stomach, like Judas, who frankly spent most of his time trying to sort out the Son of God’s shit, kept saying He should.

As Jesus Christ Our Lord staggered down the dirt path, He fell into the mud on the side. And there lay Our Saviour until a humble rabbit just happened to hop by.

The rabbit watched the poor man flailing pathetically in the mud, not realising He was Our Saviour. Hopping up, he kindly asked the King of the Jews whether He needed any help?

Looking up, Jesus saw an honest soul and said simply: “I could murder a kebab!”

The rabbit knew the nearest kebab store still open at that time of night was all the way in Byzantium. But having only just been introduced to the historic Palestine region by the Romans, he also knew where to get the best ones in that city known today as Istanbul.

And so, taking pity on the Lord and remembering the state he was in himself just last weekend, the rabbit hopped all the way there and back with Jesus’s order of a lamb kebab with garlic and chili sauce.

“Oh that was awesome!”, a much-repaired Jesus said as he took his last bite and wiped some garlic sauce off His chin. “Thanks heaps!”

And then Jesus Christ Our Lord said unto the rabbit: “What can I give you to repay your kindness? For I am the Son of God and I can do miracles and shit.”

The rabbit thought carefully for some time. This was Our Lord and Saviour, so it had to be worthy. He definitely did not want to fuck it up and ask for something embarrassing or weird.

Finally, the rabbit spoke. “I have always envied the hen,” he began.

“Where the Hell is this going,” thought Jesus, but he said nothing for He was always polite, even after He’d had a few.

“And, well,” the rabbit continued, “look… tell me if you think this is a bit weird or anything, but I guess I’ve always… well fantasised is probably the right word. Yes. I’ve always fantasised about laying eggs.”

“What the FUCK?” exclaimed the King of the Jews.

The rabbit added quickly: “Yeah, and like, make them chocolate!”

“Mate,” said the Lord, sadly shaking his head, “it’s your wish, but fucking Hell, you should maybe see a psych or something.”

And with that, Jesus granted the rabbit the capacity to lay chocolate eggs. And the rabbit, whose name was Frank, laid many. Day in and day out, Frank laid chocolate egg after egg, eating his own products in a disturbing act of sweet self-cannibalism.

Jesus, meanwhile, soon found himself in even greater trouble. The pigs were after him for some property damage suffered by some very important bankers during one of His more out-of-control binges. By this time, Judas had had it and was not cleaning up after any more of Jesus’s messes, no matter how fucking Holy the Lord was. And so he gave Our Lord up to the cops.
Having attacked the authority of Rome, the wealth of the local financial elite and sold dodgy home-brewed wine that made a 4-litre cask of goon for $10 taste like the finest Champagne, Jesus was always gonna swing.

But this was not, as we know, the end of the story.

Jesus was crucified and then rose again after three days. Which was actually better than managed by many of the consumers of his Finest Fish Products (™).

History records that it was Jesus’s “friend” Mary Magdalene who arrived at His tomb on Easter Sunday and discovered His Holiness alive and well. But this is the full tale.

For three days, Jesus was kept company by Frank. The rabbit did not abandon his magical mate, but stayed with him, laying chocolate eggs for His sustenance until He rose to His Eternal Kingdom in Heaven.

Frank tried to tell people that Jesus had been alive the whole three days, and even had some very important messages to pass on to humanity, mostly about how awesome chocolate eggs were.

But people were not willing to listen to some rabbit, especially not one with a sick chocolate egg-laying fetish. Like, sure, the Roman occupiers were into some fucked up shit, but even they drew a line somewhere.

Jesus, however, did not forget the rabbit’s final act of kindness. He granted the rabbit Eternal Life and said unto him, “go forth and lay chocolate eggs then hide them for children on Easter Sunday, but not before fully stocking supermarkets for months in advance.”

And Frank the rabbit was happy. For he really, really loved laying chocolate eggs. Like, TBH, maybe a bit too much.

So please, ignore the Islamist conspiracy to destroy Easter by removing the word “Easter” from Easter eggs. Our Lord made it Frank’s Holy Mission to lay those eggs to be sold at marked up prices in the days before Our Saviour’s crucifixion and resurrection, and dramatically marked down in the days afterwards.