'What do you call a woman...' From Billie Jean to Jolene, Esme Patterson gives voice to the women of popular songs

So as long as we exclude a few rare exceptions/overwhelming majority of days, I've been totally solid.... and who the fuck am I kidding? I have failed you all, loyal readers. I am so sorry! I promised you daily posts and have utter failed to deliver. I feel terrible and take full responsibility for my failure.

And I know I've let you down terribly and have no right whatsoever to ask for your forgiveness... but please, PLEASE, PLEASE! I beg you, beloved readers, please give me ONE MORE chance! I promise I'll change! I PROMISE! I LOVE YOU! Please don't go... please... I'm quite lonely...

My point is, I know how important I am in your lives, delivering, as I do, the far-from-latest, hardly up-to-date news in obscure folk or country or Tom Waits-related areas of popular music, but in a totally inconsistent and random fashion. It's wrong to deny you this, I can see that now.

But at least I do know a key rule of blogging is be short, sharp and to the point, and also that I refuse to follow the rules. So starting with that rambling introduction, I will, eventually, via a strange ranting detour, get to my point: which is to highlight Esme Patterson's Woman to Woman album dedicated to giving voice to the female characters in popular music. 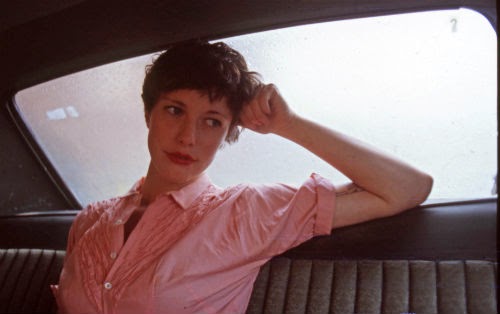 From an angry Billie Jean, to an indifferent Jolene, to an Eleanor Rigby who is actually perfectly happy with her life alone, Patterson has written songs that allow the women written about by others, to tell their side of the story.

Sick of such women characters being reduced to one-dimensional props for others to comment on, Patterson has responded with a series of "answer" songs where they sing back.

I first came across Patterson as a result of her work co-writing and co-singing several tracks on the latest album by Texas country singer Shakey Graves, most notably on Dearly Departed. (I had the sheer pleasure of seeing Shakey live in Sydney last month when he opened for the unspeakably glorious country husband-and-wife duo Shovels and Rope.)


'You and I both know that the house is haunted...' Shakey Graves with Esme Patterson.


Among other things, the Colorado-based Patterson is known as a leading figure in the very unfortunately-named "folk'n'roll" scene. Yeah "folk'n'roll", I cringe just to see that phrase even written.

So before I even get to the songs in question... what the fuck is with the insistence on the world to impose ever more ridiculous labels onto popular music??? Among other things, I have described Patterson, Shakey and Shovels and Rope as all country acts, and deliberately, even though they are all more likely to be called "folk'n'roll", "Americana" or "alt.country", in no particular order, and why???

And why the fuck do I even want to *keep living* in a world where all the fucking decent country music acts are syphoned off into stupid and offensive labels like "alt. country" or "Americana" just to pander to the prejudices of ignorant people who hear "country" and think of rednecks in stupid hats who, when they are not called "Garth Brooks" are singing songs with titles like "Achy Breaky Heart" ... I mean FUCK!!!

It drives me insane. The stuff they call "alt. country" is just fucking country! The utterly ridiculous over-produced saccharine shit that comes out of the Nashville establishment should be called "alt.country"! It sure as hell has nothing to do with the real, living country music tradition and none of these empty, commercialised over-produced labels or stations would dream these days of ever releasing of playing anything as haunting or raw as country legend Hank Williams' "Alone And Forsaken".


'Alone and forsaken by fate and by man...' Makes Ian Curtis sound like Julie Andrews singing 'These Are a Few of My Favourite Things'.


But NO!!! No we live in a world were people need fucking Hollywood to produce a fucking biopic starring Joaquin Phoenix fucking TELL THEM it is OK to like an act as brilliant and cool as Johnny Cash!

'I wear the black for the poor and the beaten down ...' We live in a world so fucked an entire generation needs Hollywood to tell them it is OK to listen to someone as cool Johnny Cash! And people wonder why I despair!


Where do people think rock music came from??? From a melding of all these popular music genres, a melding of country, blues, folk and jazz into a new whole... the earliest forms of what is considered rock'n'roll, by the likes of Elvis Presley of Bill Haley, were called "rockabilly" -- in other words, it was considered, and in fact was, largely country music played fast!

Like all genres of popular music, country incorporates a wide variety of acts and influences, spawned all kinds of sub genres and has intermixed and melded with many other genres... It includes stuff that ranges widely from the horrific to the glorious... as all genres in popular music do.

Because more than anything, it is just one form of popular music, and the lines between one form and another are inevitably blurred. The line between country and blues is blurry, as it is with other forms of folk and what became known as rock. Because they are all variations on the same thing, the same chords and chord structures, the same verse/chorus/verse forms...

Country music, like other forms of folk (of which country is one), has a particular emphasis on story-telling, on using songs as vehicles to create characters and give them life, to use the stories to capture universal emotions and paint scenes the listener can relate to and empathise with, that can humanise the listener's own emotions and struggles... Which you might thing is an especially glorious thing to do...,

BUT NO. Just turn your back on that! Not cool enough! Hollywood hasn't told you that you are allowed to like it! SPIT ON IT!!! REFER TO IT ONLY IRONICALLY AT BEST AND MOST OF ALL LAUGH AT IT AND MOCK!!!!

Answer songs. What Esme Patterson is doing is not new, by the way. Those who, based on ridiculous stereotypes and prejudices, might imagine that the most country music has had to say on the matter of gender is Tammy Wynette's "Stand By Your Man",  would not know about Kitty Wells awesome "answer" song to a track by Hank Williams.

The song, "It Wasn't God Who Made Honkey Tonk Angels", was released in 1952, a full 16 years before "Stand By Your Man". In it Wells answers Williams' "Wild Side of Life", which was about women being led "astray" by the "wild side of life" and becoming "honky tonk angels" -- also known as "women drinking in bars".

Taking the same tune, "It Wasn't God" responded by putting the blame for men being unfaithful entirely ... on men themselves.


Following in this tradition, Esme Patterson takes well-known songs by a range of (mostly but not exclusively) male artists about women and writes a response by the woman in question. It is, as she explains in a Vice.com interview, a creative and intellectual exercise -- it is a challenge to write in their voices to "humanize these characters".

This means the songs are not intended as attacks on the originals, as such -- you don't have to disown Dolly Parton and her classic "Jolene", for instance, to appreciate the witty, irreverent response Patterson has written for Jolene, whose attitude to the man Parton loves is, after all, unrecorded.

It also means that Patterson is not suggesting this is the only possible response by these characters... just the ones she has written.

Asked by Vice.com how she felt about others considered the album to be a feminist work, Patterson responded:

I welcome that. It’s a noble word to be associated with. I took on this project mostly as a personal journey in songwriting, and didn’t have any big plans with where it could go. But I certainly identify as a feminist, and I’m happy to have the work that I do give strength to that cause.


'What makes a lover from a woman that you've had?'


"Never Chase A Man" is a close second, with Patterson's Jolene telling Parton that her man is a sexist creep who's "always leaning in", and, bluntly: "Your man don't mean a thing to me."


'Men should be chasing you, never chase a man.' Patterson has Jolene give Dolly Parton some advice on how to treat men.


You can read Patterson's own explanation for what motivated her and what she was trying to achieve in a column she wrote for The Guardian:


It all started when I was in a hotel room in Spearfish, South Dakota, learning to play Loretta by Townes Van Zandt. I looked the words up and was copying them to my journal, and realised I was really reading the words for the first time ...

Among other things, Van Zandt says of Loretta that she “loves me like I want her to”. Reading that line in that moment, I had a revelation. What if Loretta could tell her side of the story, what would she say? How would the story change? What does she want?

That night, I gave up learning to play Townes’s tune and instead wrote a song from Loretta’s voice called Tumbleweed. Once I’d heard Loretta in this new way, I felt as if I was listening to a lot of the old music for the first time – and it inspired me to get to work. I wrote a song from the perspective of Dolly Parton’s Jolene, Elvis Costello’s Alison, The Kinks’ Lola, the Beach Boys’ Caroline, the Beatles’ Eleanor Rigby, Bob Dylan’s Ramona, Michael Jackson’s Billie Jean, the Band’s Evangeline, and Leadbelly’s Irene...

I believe that our experience is the only truth we can honestly claim – and to create this album, I had to reach deeper than my own life and into the stories of these fictional women, into what makes each of these characters human ...

The key thing I realised writing this album was that I had never really known what some of my favourite songs were about. A catchy melody or an amazing singer takes the spotlight while the story being told takes a backseat. One aim of this project was to take an in-depth look at songs about women that I had heard hundreds of times before and to finally really listen.

Woman to Woman gives a voice to female archetypes shown one-dimensionally in pop music. The record aims to transform these characters into women, to make them human.