My prediction for tonight's Victory-Wanderers match in Melbourne.

My prediction for tonight's match between Melbourne Victory and the Western Sydney Wanderers in Melbourne is all the 9.30 news bulletins tonight (and then all news shows repeatedly for the foreseeable future or until the next time Lleyton Hewitt wins anything) will show any footage at all of anyone at, or in a 100-kilometre radius of, AAMI Stadium looking even vaguely cross while the news reader hyperventilates over "more violent scenes" bringing "fresh concerns of sokkah thugs" followed by a representative of the Victorian police insisting on the need for "stern measures" to stamp out the scourge of hooliganism that has taken over this country and then the Football Federation of Australia calling a press conference to announce they are expelling the two clubs forever from the A-League and all that A-League fans carrying membership tickets in active support areas will be preemptively shot, causing the Daily Telegraph's Rebecca Wilson to complain at the soft, conciliatory approach of the FFA for refusing to place all Red and Black Bloc member's heads on spikes outside Parramatta Stadium to make a clear stance against criminality, before she drunkenly plows her car into a nearby kindergarten, killing dozens.

This will be rapidly followed by Scott Morrison announcing plans to round up and deport anyone caught wearing a "sokkah shirt" while Christopher Pyne announces a reworking of school curriculum to ban any mention of any sport not played with an egg-shaped ball that isn't called "cricket". 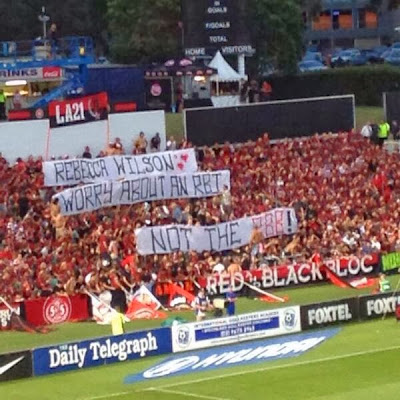 The Red and Black Bloc, active support for the Western Sydney Wanderers, responds to repeat drink-driving offender and Murdoch media hack Rebecca Wilson, who wrote a hit job on the RBB without a word of truth in it that, among other things, said the decidely multicultural group "made her skin crawl".

Below is an alleged leaked email from Channel 10's Chief of Staff to Channel 10 staff today, posted on the Passion Is Not a Crime Facebook page dedicated to defending football supporters from various attacks. It could well be s sign of what to expect in media coverage of tonight's game. (You can see a screen shot of the alleged email, signed, here.)

If you happen to be going to the Melbourne Victory / Western Sydney Wanderers game tonight at AAMI Park could you please keep your smartphone handy in case crowd tensions boil over.

News would be interested in any amateur vision shot of flares / push and shove / security evicting people / verbal abuse etc etc. Inside and outside the ground.

The last request is that you please tip your phone on its side to film ... so any vision is captured in landscape.

Please email me ASAP at this address if you manage to film something."