The NRA has a point, if you'll just get drunk enough to consider it properly

A lot of people have been greatly concerned about the seemingly never-ending spate of mass shootings in the Land of the Free.

Well, I think we can all say, after Friday's thought-provoking press conference, the NRA has got the whole "insane spate of shootings thing" (with more than 100 shooting deaths in the week *after* the Sandy Hook massacre) well covered. It took the time to avoid knee-jerk politicised reactions, and instead came up with a calm and sensible solution: militarise every school in the country.

Rather than *ridiculous* attempts to restrict access to semi-automatic weapons designed for mass killings of the sort Sandy Hook shooter Adam Lanza used -- let alone deal with their fucked up system, whose military slaughters children oversees, and which alienates people at home and fails to give them health care -- the NRA knows what is really needed: Armed cops in every school -- and principals and teachers also armed and trained to kill.

Now I realise that might, at first, seem a bit mad. It is, after all, a call to steadfastly *refuse* to make it harder for psychos to get hold of instruments of mass death, but rather put more instruments of death in every school.

But I promise you, if you think it through while consuming a full vat of bourbon... especially if you mix that with some powerful mescaline... then, at the end of that, I think you'll find the NRA starts to make some real sense. Give it a go, you'll see what I mean.

Coz, sure it failed to stop the Columbine massacre, in which 12 students and one teacher were shot to death despite an armed guard at the school, but that's just coz the armed deputy was not given access to depleted uranium-tipped missiles to fire from a shoulder-held rocket-launcher. Or a decent supply of white phosphourous. And he suffered from the *catastrophic absence* of a giant Death Ray.

Just think about it! If it wasn't for the fucking bleeding heart liberal Big Government fascists in Washington denying American schools such heavy weaponry, then we would see a drop in violent incidents for SURE!

More or less. There might be *some* hiccups, like that described by @SarahbaxterSTM, who tweeted: "Armed guards at school? My kids actually had one in the US. He shot his teacher ex-girlfriend and was shot by police." But look, no system is perfect.

And if you read the full transcript of the NRA press conference, actually look beyond all the sensationalist headlines from the biased press about how all the NRA can propose to stop gun violence is even *more* guns, you will see some very important analysis on what *actually* causes mass shootings.

It is not the guns. Or the bullets. It is "violent video games", "blood-soaked films" and music videos that "portray murder as a way of life". It is really not so hard to see if you are willing to think about it, particularly if you have also consumed huge quantities of mild-alterting substances: fictional depictions of violence cause violence, not the actual real instruments of violence that are actually used in real life to cause violence.

The NRA also pointed out it was impossible to stop killers, "given our nation’s refusal to create an active national database of the mentally ill". Finally, SOMEONE has the courage to come out and SAY what we ALL FEEL: anyone with mental health problems is a menace to society who, far from treated, should be feared and demonised.

And once more, the NRA comes up with a *practical* solution, not just more sensationalist headlines -- create a national database, a proposal that would, if I might make a humble addition, be assisted by making all those with mental health issues wear Yellow Stars in public. That way, the armed guards will know who to aim for.

And has anyone *really* thought through the consequences of banning these assault weapons? I mean, check out this ad for the semi-automatic rifle, made by gun corporation Bushmasters, that Adam Lanza used to shoot dead 20 six-and-seven-year-old children. 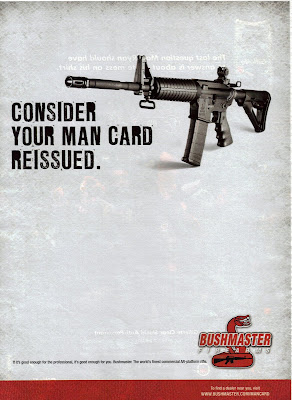 You can't just go around banning these things! How would our "man cards" get reissued? We wouldn't be able to tell men from boys, not without making every male walk around without pants to see whether or not they had gone through puberty and that is just really fucking creepy. What a freaky nightmare society these liberal sickos want to create!

And how would Americans defend their homes? I mean, here in Australia, it is terrible! All over the country, innocent citizens are being slaughtered in their beds every night, in THEIR THOUSANDS, and everyone of them, their dying words before evil monsters bash their brains out, is a screamed: "IF ONLY BUSHMASTER WERE ALLOWED TO SELL HIGH-POWERED SEMI-AUTOMATIC WEAPONS OF THE SORT CAPABLE OF GUNNING DOWN DOZENS OF YOUNG CHIDLREN IN SECONDS...BUT NO, THE GOVERNMENT TOOK MY 'MAN CARD' AWAY AND NOW... OH NO... AAAARRGGHH!!!!!!!!!!!!"

Bushmaster's website points out: "Whether it's helping soldiers secure our freedom, protecting a police officer in the line of duty, keeping families safe and sound, hunting big game, or bringing home a coveted competition trophy, we understand the important role that Bushmaster plays in the lives of our customers. That's why, for us, building rifles and carbines is more than a job-it's a passion."

And passion, we can all agree, is important. But surely Adam Lanza's sharp shooting should not be forgotten! And while it was a pretty impressive individual effort, not for nothing do Bushmaster boast that "the quality materials, quality control and craftsmanship we build into every Bushmaster rifle give it the potential for exceptional accuracy".

AND YET NOT A WORD ON THEIR WEBSITE TAKING ADVANTAGE OF THE HUGE GLOBAL MEDIA ATTENTION ON THE ACHIVEMENTS OF ONE THEIR PRIZED CREATIONS, INSPIRED BY SUCH PASSION!

Really, their marketing department has not got their eye on the ball. They are letting a huge opportunity to demonstrate the brilliance of their merchandise slide right past -- almost as if they are *ashamed* to highlight the role of one of their own products!

Some might say, was it really a *fair* demonstration of its capabalities? After all, while *Lanza* was armed with this powerful, accurate, just plain FINE AND LET'S FACE IT KINDA SEXY speciman of a mass killing machine, it was NOT exactly a fair fight from the perspective of the 20 kids he killed.

Bushmaster understands. That is why, under the subheading of "Junior Corner", they point out: "The NRA Advanced Junior Shooting Camp provide an excellent opportunity to hone your rifle shooting skills."

(The young sporting shooter/mass murderer can check out the NRA's youth progams via links helpfully provided by the Bushmaster's site.)

And really, if not for all those fucking bleeding heart liberal Big Government fascists in Washington who think six-year-old kids should be denied access to high-powered assault weapons, then this terrible tragedy might have been avoided. If there is one lesson from these terrible events, it must surely be ARM THE KIDDIES!