Mark Steel tackles booze hysteria and saves me the trouble

You know, I was just about to write a new rant on drinking hysteria when British socialist, comedian and columnist Mark Steel did it for me.

In his weekly Independent column, Steel focuses on the hysteria, which we know more than enough about in Australia.

As we *also* know only too well, the hysteria (of the "four standard drinks is binge drinking" variety) is just ground work for horrific attacks -- such as the outrageous reintroduction of drunk-and-disorderly laws in New South Wales.

Really, it is hard not to take this personally. I would not be surprised to find out the bill was informally known as the "Carlo Sands Law".

So, I warn the Brits to expect legal trouble.

Steel focuses his piece on the situation in Britain. From this we may conclude the attacks on drinkers are international, and therefore so must be our resistance!!!

As Martin Luther King Jnr once said, a threat of sobriety anywhere is a threat to intoxication everywhere. 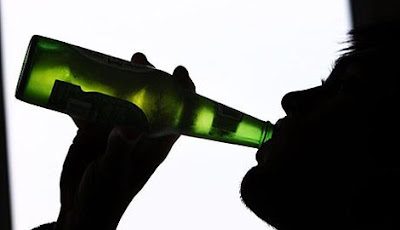 Remember: When we drink, we are not just drinking for ourselves, but for humanity.


Mark Steel: Alcohol can be a problem, as can doctors

Britain is getting drunker than ever, apparently, with a government "consultation" expected to reveal the shocking statistic that, compared with 20 years ago, there are 80 per cent more documentaries or news items showing a clip of a girl in a short skirt being sick on a bench while a lad with no shirt makes a noise like a werewolf as he's thrown into a police van.

But more worrying is the increase in pompous doctors who come on the radio or programmes like The One Show to give us guidelines, telling us, "Those of us who think we're drinking moderately may still be at risk. For example if you have one glass of wine and then later in life have another, you are technically an alcoholic."

Then they say, "Of course there's no harm in drinking safely. I often enjoy an Italian wine with my evening meal, by opening the bottle and pouring it all into a bush. That way there's only a small risk to my liver, as long as I do it once a month as a treat."

Websites offering advice on safe drinking are full of tips such as, "If you're thinking of having a lager please consult your doctor first." Or, "One way of cutting down consumption while still enjoying a wild girls' night out, is on alternate rounds instead of having a drink have a bowl of soup, or go canoeing."

On the Drinkaware site I looked at, I was told three pints of medium- strength beer, twice a week, can lead to "heart disease, liver disease, impotence and cancer." I didn't check but I expect it went on, "and a fourth pint will cause cat flu, plague, rust, feeling like a woman trapped inside a man's body, fascism and a tendency to suddenly turn inside-out in the morning."

It also told me, "If you consume alcohol to feel good, or avoid feeling bad, your drinking could become problematic." So it's only safe to drink if it's to make yourself feel worse.

Still, alcohol can cause havoc, so we shouldn't be flippant. You only have to look at the demise of poor Amy Winehouse, who presumably had three pints of bitter on a Sunday and then another three the following Friday.

But the campaign against drunkenness doesn't seem to have learned from the "Just say no" anti-drugs campaign, which connects with hardly anyone as it insists drugs lead rapidly to disaster and aren't fun.

Similarly any attempt to reduce drunkenness must depend on acknowledging that people do it because it seems fun. The alcohol industry appears to be aware of this, which is why it markets drinks for teenagers as bursting with fun, then denies they're doing so with comments such as, "The product 'Marshmallow-alco', in which a marshmallow is filled with a cocktail of vodka and Southern Comfort, is not in any way aimed primarily at a younger market range."

But the Government's "consultation" is being run in conjunction with the alcohol industry, to such an extent that the British Medical Association have withdrawn from it altogether as a pointless exercise, because if we were to be cynical, the drinks industry may not be the keenest people to find ways of cutting down the sale of alcohol.

So the complex job of getting young people away from drug addiction and alcoholism will still be done by charities, such as Mentor UK. But they have declared the recent cuts in rehab clinics have made that almost impossible, saying these cuts "could have devastating implications".

So we're left with doctors telling us not to drink sherry on two consecutive Christmases, and if Amy was still around she could have updated her song by singing, "They tried to make me go to rehab but they said, 'Piss off, we've shut'."