Some good news for a change 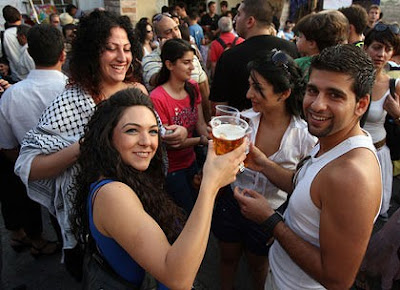 
It can be hard to find good news is this god-forsaken hellhole of a world.

When I look in the papers these days, two things repeatedly send that shiver of horror and disgust up my spine: the latest Western-backed Israeli crimes against the dispossed Palestinian people and the latest crypto-prohibitionist assault on our right to drink to forget the world right here in this grand nation of ours.

But there is some good news amid the horror.

I like the October 5 Sydney Morning Herald story pasted below because it is about beer. And Carlo Sands likes beer.

I like it because the story of the Oktoberfest festival in the Palestinian West Bank town of Taybeh is about enjoying beer in the face of far greater odds than drinkers in this country could dream of.

And I like it because anywhere people defy the odds to get pissed is a victory against the anti-drinking elements everywhere.

And by "anti-drinking" elements, I don't mean those who don't drink. I mean those who seek to stop others drinking. Usually, such people drink themselves, the selfish fucking hypocrites.

In the story below, a Muslim Palestinian, who has never tried the beer, says she thinks "the festival is a good thing".

A large number of Muslims are like my friend Conehead - their poison is coloured green. Like Conehead, they do not judge others for the intoxicants they use to deal with this insane world.

The Israeli authorities, on the other hand, no doubt drink like fucking fish. But Israel has made it near impossible for Palestinians in the West Bank to enjoy some booze themselves.

The West Bank having been militarily occupied by Israel since 1967, its only brewery was only opened in 1995 thanks to the small easing of conditions Palestinians lived under as part of the Oslo Peace accords.

The article below details the difficulties the brewery faces trying to operate under Israeli occupation, with the free movement of goods and people denies, with endless militarty checkpoints and checkpoint closures, and the heavy costs bringing in needed goods from Israel.

And it is not just military occupation. More and more Palestinian land in the West Bank is being annexed for illegal Jewish settlers. All sorts of Jewish-only roads and other forms of infrastructure are taken up by the settlements.

Also, water is diverted to the settlements, making it scarcer for Palestinians. No doubt this is an extra impediment and cost to any Palestinian who may wish to brew beer in their own fucking country.

Despite these formidible obstacles, the article explains, such is the passion for letting Palestinians enjoy a few fucking beers that brewery owner Nadim Khoury works 16 hours a day to get the stuff out.

What a fucking hero. This is a good news story indeed.

It is inspiring. But there is a scary side worth considering: if they were to set this festival up on any of the 180 streets in places such as Kings Cross, Redfern, Surry Hills and Newtown that the authorities have now declared alcohol-free-zones, then the cops could seize the booze and fine those involved $2200 each.

There was meat grilling on barbecues, children with painted faces, stalls selling crafts and cakes, a stage for live music and even the odd priest wandering about. Everywhere people were clutching glasses of beer in the afternoon sun.

Welcome to the annual beer festival in the West Bank, specifically the village of Taybeh, home to the only brewery in the Palestinian territories.

Around 10,000 people were expected to attend the weekend's Oktoberfest, which would have made it the biggest since the event began in the Christian-dominated village.

It is a mark of the festival's success that it was crammed with food stalls doing a lively trade to Palestinian families (both Muslim and Christian), diplomats, aid workers and tourists. 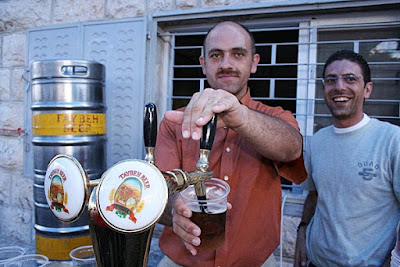 But it was the eponymous beer itself, briskly selling at 10 shekels ($2.80) for a half-litre glass, that was the star of the show.

Made without additives and using water from the spring of Ein Samia - ''delicious'' in Arabic - it was slipping easily down the throats of thirsty visitors.

Business, according to the brewery's owner, Nadim Khoury, is booming despite the obvious difficulties of operating in an overwhelmingly abstinent Muslim environment. The brewery faces ''many obstacles - religion, culture, occupation, closures'' plus a prohibition on advertising alcohol, Mr Khoury said.

The firm started brewing beer in 1995 in the optimistic years after the Oslo accords. When the second intifada started in 2000, the brewery faced a crisis.

But output has since tripled to 600,000 litres a year and there are plans to expand. A non-alcoholic version of the beer for the Muslim market has made a good start, said Mr Khoury. He would like to see an end to the expensive ''back-to-back'' system of moving goods from the West Bank into Israel.

The beer has to be unloaded from Palestinian trucks at checkpoints and reloaded onto Israeli trucks, often involving long waits in high temperatures.

At the festival, two young women are listening to a Brazilian band. Nibal, 22, a Christian Palestinian, enjoys drinking Taybeh beer, but Samah, 24, a Muslim, has never tasted the village's famous product.

''But I think the festival is a good thing,'' she says. Beer on offer. Half a litre costs about $2.80. Even in the West Bank under Israeli military occupation, despite the high costs and difficulties of importing goods, despite the scarcity of beer, it is still cheaper than under Australia's aclohol taxation regime. 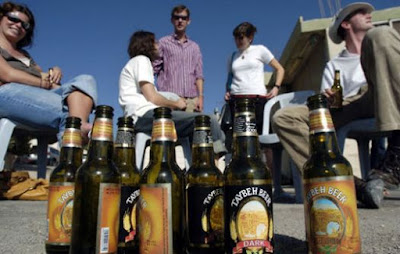 On a Redfern street, these would be confiscated. 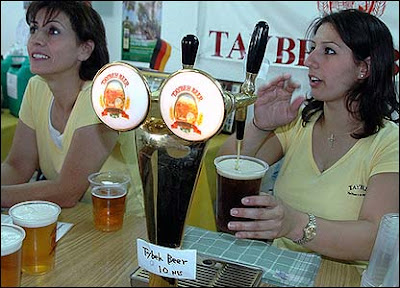 Israeli settlers are yet to take all the water. There is still enough for a few draught beers. 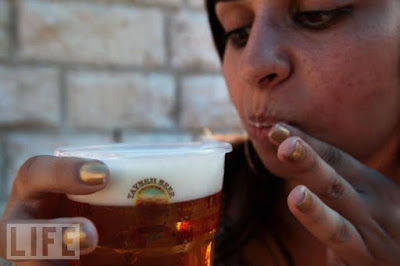 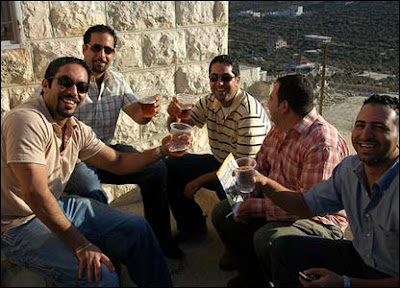 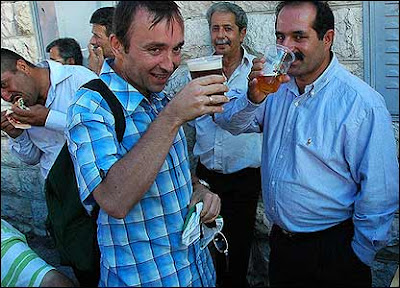 That guy has clearly enjoyed his Oktoberfest. Lucky he isn't on a Sydney street, lest he be arrested under the noticeably drunk laws introduced last year.