I have written on Conehead the Barbituate’s woes in his ongoing struggle to kill the pain of late monopoly capitalism with the help of an illicit plant.

Well, Conehead’s troubles have worsened, he tells me, due to a somewhat uptight neighbour complaining about the smell of the smoke from his bedroom window.

As a result, we have Conehead’s latest sent to this blog, posted as a comment to the post on drug dealers inspired by his less-than-enterprising Man.

As these comments were educative and instructive, I have posted them in full below.

Of course, Carlo Sands does not encourage using this information for anything but academic studies. I've said it before and I'll say it again, abuse of the demon weed is known to lead to terrible scourge of swimming addiction.

If you *must* make this recipe, Carlo Sands advises you to use the non-THC variety of of the demon weed to avoid the pitfalls of a terrible addiction. 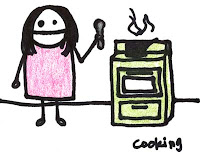 Method:
1. mix flour, sugar & cocoa
2. chop up hemp
3. melt butter
4. cook hemp in butter on low heat till butter goes green
5. mix hemp and butter with flour, sugar & cocoa [HINT: do not strain hemp out of butter. to do so detracts from the subtle flavour.]
6. add eggs
7. mix some more
8. stick in greased baking tin and put in oven at 180°C for an hour.
9. use bamboo skewer to see if its ready. if nothing sticks to skewer take out of oven.
10. if stuff does stick to skewer, take it out of oven anyway because you can’t be fucked waiting to see how its turned out.
11. panic when liquiddy uncooked stuff in the middle starts pouring out everywhere. Try and get all the uncooked stuff back in baking tin and stick it back in oven.
12. In the process of following step 11, eat lots more than you were planning to as you stop bits of it falling on the floor.
13. get really shitfaced because you've eaten half the cake, forget how much you've eaten so you think its really strong, give small bits to your friends telling them they'll get really shitfaced [HINT: if you don't have any friends, anyone around will do].
14. wonder why the people you've given bits to aren't as trashed as you are & seem a bit disappointed.
at 11/20/2009 07:43:00 pm