At last, an example of sanity in a truly mad world

The world plunges faster and deeper into climate chaos (to such a degree that, today, Sydney feels like Adelaide and that is never a good thing).

The disastrous Afghan war sinks deeper into a bloody mess with the only ideas that seems to have occurred to the occupiers being to send more soldiers they don’t have and spread the war to Pakistan.

The CEOs of the big investment houses have started giving themselves seven, eight and nine figure bonuses once more, while millions of citizens of the world’s richest country go hungry and the United Nations sends in investigator who reports gross abuse of millions of homeless.

Bon Jovi score a number one record in the US.

I could go on. It is indisputable. The slide into barbarism is all around us.

But finally, there is a ray of light.

Amid all the insanity, bloodshed and impending apocalypse, something sane happened. Something right. Something that makes perfect sense and is as it should be.

Johnny Depp has been voted the Sexiest Man Alive in the 2009 People magazine poll.

In case you think that would just be automatic, last year the award went to Hugh Jackman. For christ’s sake. 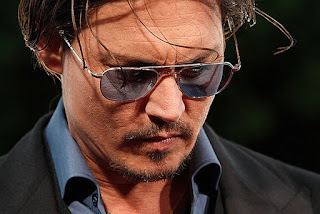 “Finally, something sane in the papers.” For the first time since he won the Sexiest Man Alive award in 2003, Johnny Depp finds something in the news that is neither insane, infuriating nor bloodcurdling.
at 11/19/2009 02:54:00 pm