The real threat to Israel

The threat facing the free world, the only democracy in the Middle East, as well as Essendon's chances in the 2009 AFL Premiership (I swear I heard that last one from Tsipi Livni and it sure struck a chord with me) is much greater than I had ever imagined.

The terrorists truly will stop at nothing.

I have always appreciated the pledge by the original proponents of creating the state of Israel: It would act as a "bulwark of Asia down there, we would be the advance post of civilisation against barbarism".

I mean, you can't trust an Arab, we all know that. No one, asides from freedom-hating, terrorist-loving Carlton supporters would dare argue otherwise.

However, after recent events I truly believe I can understand much deeper the essence of this statement. Those barbaric bastards.

I know that through this recent horrible war, when it seemed the missiles just would not stop flying erratically into Israel and causing rather annoying holes in the road, I have been unable to sleep out of fear for the safety of those who live on land that they have only controlled for a mere six decades.

The selfish previous occupants had thousands of years on the land. So miserly are they they refuse to accept Israel's involuntary time-share arrangement (they can have back in a millennium or two).

But I must admit I never stopped to consider the full horror of the situation.

How many of us have stopped to consider that in the south of Israel, the pets have also been under fire?

Yes, you may not believe such horrors could exist, but Ynetnews.com reports it straight:

"Last week a Qassam rocket hit a house in Sderot and killed the family's dog, which was at the building's yard during the attack. The dog was rushed to the veterinarian for treatment, but died due to severe shrapnel injuries and massive loss of blood.

"Following this incident and in light of the fact that like their human owners, pets in Israel's south are also under the constant rocket threat, the Agriculture Ministry has decided it would help pay for the medical care of dogs and cats injured by rocket fire from Gaza."

The terrorists are determined to kill Zionist dogs. And their pets.

And treatment for injured pets is a little hard on the hip pocket, as the article explains:

"'One of the main problems arising from the treatment of wounded animals is that the tax authorities do not consider pets as property, and therefore owners are not compensated for medical treatment of the animal,' said Dganit Ben-Dov, DVM, the Veterinary Services official in charge of enforcing the Animal Protection Law.

"'This is the aspect we wish to rectify, since treatment to a wounded animal could cost thousands of shekels,' she added."

Well I for one can think of no better way for the Israeli state to dedicate resources at a time like this than by paying for the vet fees of injured animals.

Some anti-Semites may raise the fact that, with Israel deliberately targeting Gazan civilians having already imposed a total siege that killed hundreds before bombs even started dropping, that this is truly sick and can only be interpreted as a racist assertion that the lives of a dog or cat are worth more than that of a Palestinian.

Well, what can you expect from Jew-hating anti-Semites?

They all love the Iranian mullahs and cheered on 9/11. They think Bin Laden is the modern-day Che Guevara. And sip their lattes in the inner-city. And drink chardonnay.

I mean chardonnay! Talk about barbarism. What, did the pubs all run out of VB?

Pets play a very special role in the life of Israelis living in the areas targeted by the terrorists.

A moving Ynews.com article entitled "The healing power of paws" reveals how "at risk" Israeli youth use pet dogs to calm their nerves in this terrible time.

"Dogs, known as man's best friend, have proven to be an assets to therapy. In Sderot, the adage takes on a deeper meaning for youths taking part in a special dog-training program designed to boost their self-esteem in light of the ongoing rocket fire."

The article doesn't state whether or not the low self-esteem is related to the fact that, on top of every other injustice these youth must face, they must also face outrageous allegations that the state that acts in their name is responsible for genocide against an entire people.

Thinking about this travesty, it does occur to me that here we have the outlines of a potential terrorist strategy by the uncivilised barbarians: go for the pets.

Such a strategy would have a two-fold effect.

1) It could very well bankrupt the Israeli state through escalating vet fees.

2) By removing the "healing power of paws", it would reduce Israeli youth to nervous wrecks, thus making a new generation incapable of upholding the principles of freedom and democracy by waging war on a fenced in, starved people by bombing their hospitals and refugee safe havens.

I can only hope this thought does not occur to the terrorists. The proud State of Israel could be brought to its knees in days.

As we all know, there is a lot of anti-Israel bias in the media.

The media seems quick to point out that more than 1300 Palestinians have been killed by the latest Israeli bombing, including more than 400 children, while not giving appropriate space, which of course should be total, to the fact that this was purely a legitimate measure of self defence for all the pots holes the terrorists have put into a number of Israeli roads.

Do you know what this does to a car's suspension?

Thank christ, then, that Joe the Plumber, who made a decisive, game-turning intervention int the US presidential elections on the side of John McCain, agreed to travel as a correspondent to Israel, on behalf of US conservative website Pjtv.com to report on behalf of all the "average Joes" being threatened by Hamas.

In the comment section of the Ynet.com article , some anti-Semites had the gall to advocate that he would be better off, while in the region, spending his fixing the water and sewerage in Gaza destroyed by Israel!

Now, am I really the only person in the world who strongly suspects that someone has spiked Israel's water supply with massive quantities of crystal meth? Thus making Israel totally irrational, severely paranoid and extremely violent?

If anyone has a more rational explanation, I for one would like to hear it. 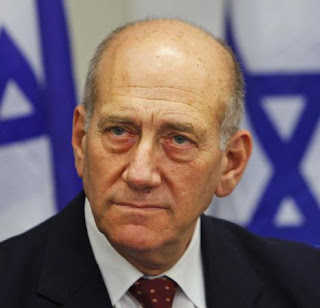