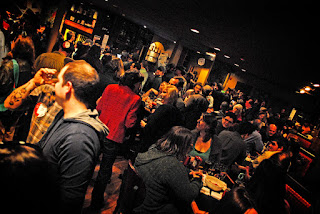 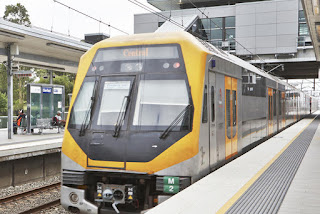 I wanted was a quiet beer after work. And a simple train trip home.

In Sydney. What a fool.

Now admittedly, you can't blame the authorities, maybe, exactly, for how little I enjoyed my regular "post-work" pub. I mean not logically, but I'll give it a go!

And sure the train wasn't too bad. The trip only took 20 minutes longer than usual, and, by itself, that hardly seems a guillotining offence,

But it is the sheer consistency with which things get worse in this city that grinds you down.

So maybe I can't blame Our Overlord Gladys for the pub adjacent from my work in Surry Hills being seemingly inexplicably overrun by young arseholes. But the generalised degeneration of pubs in this city?

It isn't even the much-talked about "lockout laws". I blame the fucking pokies. It's bad everywhere, but you head west of Ashfield and "pubs" are mostly gambling dens, with huge rooms of pokies, a big room for the TAB and then a bar stuck somewhere near the front with a couple of small tables.

Well before the "lockout laws", the dominance of pokies in NSW pubs killed live music Sydney outside a small, shrinking number of venues. Why would a venue owner pay for live music when there's a far greater revenue stream in zombified punters in front of flashing screens scientifically designed to maximise addiction and minimise loses to the house?

All the old-timer stories about iconic pub gigs by "the Oils" or "Chisel" don't outweigh the easy cash stream generated by pure human misery accompanied by an irritating electronic orchestra.

So I yeah I blame Gladys and every NSW corrupt politician before her who let the cancer of gambling erode the decent cancer (as in the one I personally enjoy) of alcohol abuse.

But I guess I can't blame our inexplicably re-elected Premier for what happened as I strode from my office on Elizabeth Street to the Strawberry Hills Hotel, one block up from Central Station in Surry Hills, for what I had imagined would, as per usual, be a QUIET post-work beer at Happy Hour prices.

I managed to catch the end of Happy Hour, but there was little happy about it. The bottom floor, usually sparsely inhabited on a Tuesday evening, was packed. With fuckwits.

They were young. They were loud. They were obnoxious. And they were everywhere. Much like an infestation of cockroaches in an over-priced Sydney flat, only at least these patrons left less droppings around the place. So far as I could see. Still, the night was young.

How bad was it? I had to share a table! On a Tuesday evening at the Strawberry Hills Hotel (or "The Strawbs" as the signs around its interior indicate it desperately wants to be known... or to go by one sign, #thestrawbs, even though if that hashtag were to ever "trend" on Twitter, it would surely be for reasons the hotel management would regret).

How bad was it? The table next to me was packed with loud young people holding forth on the important matters of life. Which, in their case, centred on a couple of the loudest young dudes at the table discussing how frequently people vomit in their sharehouse.

How frequently? Well, they announced they'd taken to leaving hand towels around the place, strategically, so when people chuck up, they can at least clean themselves up a bit.

They really were pretty proud of this state of affairs, which you might have thought would be cause for an emergency "house meeting" at the very least.

With my beer and Happy Hour both finished, I made a rapid exit, and discovered the problem: renovations to the upstairs area that features a beer garden. All the pricks I don't normally have to deal with who drink up there were, tonight, downstairs. Taking up space and discussing vomit.

It may not be rational, but I still blame Gladys.

I was not ready to face Sydney Trains just yet. I only went to #thestrawbs in a futile bid to dodge the worst of a packed peak hour on the 40 minute ride to my new place in Granville, despite knowing the trains remain pretty unbearable until much later.

So I stopped at the Royal Exhibition Hotel, opposite Central Station, and discovered the paradise I was seeking,

There was hardly anyone there, which is only decent for a pub on a fucking Tuesday evening. I enjoyed my schooner. I felt as relaxed as I foolishly hoped to be after visiting the Strawberry Hills Hotel. I thought: "This evening isn't so bad!"

Fucking idiot. I had forgotten I still needed to get a train home. In Sydney.

Of course, I arrived in time to just miss a train. But the next one stopping at Granville wasn't too far away. It is not, after all, the scheduled frequency of trains that causes the ever-growing angst with Sydney Trains. It is every single other thing.

The train arrived and I think it was more or less on time. By now, just after 7pm, it was even possible to get seat. Things were looking up!

They looked up for all of about a minute, before the train stopped inexplicably somewhere between Central and Redfern, which is the very next station after Central. The train had gone a few hundred metres without any issues, which probably broke some sort of record for efficiency.

There was no announcement. What that means is, whatever the problem is, they dare not even tell the driver...

It can't have been too bad. We didn't wait too long before the train started moving... slowly.

I don't know why it moved so slow. What I do know is that somehow, travelling between Redfern and Burwood took half an hour, which, for a limited stops service, surely defies the laws of physics.

"How are we only at Burwood?", someone around me asked. Perhaps realising how weird this was, the driver broke his silence, apologising for how slow the train was moving, saying it was down to "operational issues". I'll bet Thersea May wished she'd thought of that and blamed Britain's Brexit debacle on "operational issues".

I felt for the driver. Surely, by now, they could have automated these apology announcements, much like the weird, disjointed recorded announcements that tell you the next station is Strathfield and you should change at Strathfield for trains to the Central Coast and Newcastle. They should just follow that with "And we... apolo...gise for... all...the de...lays" as a matter of course. If only to save the voice of the poor drivers.

Because the train was now running late, it picked up significantly more passengers than usual at its key stops, till the carriage resembled the ground floor of #thestrawbs -- far too many people for this time of night. What was comfortable at the start of the trip was now definitely not.

It wasn't just the inevitable urgent need to take a leak that comes with getting on a train after a couple of beers that was bothering me. No, I had to deal with a "manspreader".

Now, I was lead  to believe the problem with "manspreading", whereby some entitled male takes up more space than they are entitled to, was an issue to do with sexism! Yet I am a male! And here I was suffering!

How can this be? Have the feminists lied to me? Or should I have turned to the manspreader and said in my deepest, most manly voice: "I believe think there has been a misunderstanding here!"

I don't know, all I know is from Strathfield on I was pressed uncomfortably into a corner of the train cabin by a bloke with his legs unnecessarily spread, as I desperately sought to suppress the beer-driven desire to take a piss.

The train moved at what felt like a snail's pace. Somehow, it made it to Lidcombe, which just meant more people piled on. Then Auburn and then Granville was next!

Oh fuck, not quite. I'd forgotten Clyde Station. What is the fucking point of Clyde? Has any human being ever gotten off at Clyde?

The answer is yes: this night, one guy out of the entire packed carriage got off at Clyde. I cursed and tried not to piss myself.

I made it. To Granville with non-urine-stained pants. A MODERN DAY MIRACLE!

Little known fact: this 55 minute train trip only takes 35 minutes according to the Sydney Trains timetable! It's like an especially irritating time machine!

And yes, OK! It was only 20 minutes late. It wasn't the full scale meltdown that increasingly plagues Sydney Trains. But it is the sheer repetitiveness of this that starts to grind. The inevitability of constant minor inconveniences punctuated by large-scale collapses of the system.

And sure, it all seems inconsequential compared to the news today we are looking at the total collapse of the ecosystem with no less than 1 million species facing extinction... but that is the point, surely. This fucking system is bringing on a horrific, runaway, multi-faceted ecoholocaust and THEY CAN'T EVEN MAKE THE FUCKING TRAINS RUN ON TIME!

I mean, if they can't even do the basic minimum to sustain civilisation -- functioning public transport and decent pubs -- they got fuck all chance of stopping the shitstorm already under way.

Overthrow the pricks. The Bolsheviks made the Russian Revolution around the three simple slogans of, "Peace, Bread, Land!" Let us do it around our own, modest demands: Pubs, Trains, and No Total Destruction of All Life on Earth in an Unprecedented Ecoholocaust.

'We want to burn your fucking whole town down!' Sometimes, The Nation Blue, I get your point.