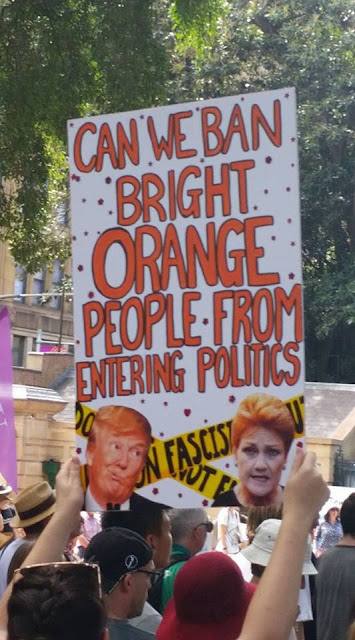 This is a tough call.

This placard appeared at Sydney's refugee rights demonstration on February 5, called in response to bickering between the Orange Freak and the Australian government over a deal to illegally traffic desperate human beings from the isolated, offshore, torture camps Australia holds them in to the United States of America, where brown people are, like, not exactly fucking loved right now.

It makes a controversial point. In the interests of full disclosure, I am obliged to point out I am, actually, one of them.

I am a ginger. A ranga. One of "the Orange People". A carrot-topped possessor of some fire-crotched Fanta pants. (Actually... maybe just pretend I didn't refer to my own crotch on this blog and we'll all sleep better at night.)

This despite the fact that I was, and indeed am, demonstrably not "blue" in any way. My hair colour is clearly orange, of the sort popularly called "red".

Too little research has been carried out into the long-term affects of such demonstratably false nicknames being applied to innocent children, too young to comprehend the social context... but I can only assume my long record of sustained adult (and teenage, let's be honest) alcohol abuse must at root be tied back to this false characterisation of my hair colour.

My point is... the rise of Donald Trump has brought with it a terrifying rise in hate. For instance, the very day after he won the elections, I personally witnessed a clear cut example of Trump-fuelled hate right here in Sydney!

Yes! An angry Mexican abused me just coz I'm orange!

He saw me, came right up and angrily pointed his finger as he almost spat out the phrase, "Your people!"

My first response, when I got over the shock, was like, "Hey dude! #NotAllGingers, yeah? Like #GingerLivesMatter!"

But then... once I calmed down and thought it through... I was forced to admit the prick had a point.

And so does that placard.

Because there is something us Orange People don't talk about much, even among ourselves. And it is that we have always known, deep down, if we are willing to admit it, that a ginger would destroy the planet.

It is just one of those things. Of course it would be a fucking ranga.

We are just broken somewhere deep inside.Whether from the schoolyard abuse or some deep flaw in the DNA that produces the deformity that is red hair... I cannot say. But yeah. A fucking ranga. Just fucking had to be.

That protest placard is a tough call, yes, but fair. Ban all orange people from holding any office now. Except maybe in Scotland, otherwise they'd never find enough bastards to fill their devolved parliament.


Down by the Riverside motel
It's ten below and falling
By a ninety-nine cent store
She closed her eyes and started swaying
But it's so hard to dance that way
When it's cold and there's no music
Oh, your old hometown's so far away
But inside your head there's a record that's playing