Think you're having the worst day ever? Here's some pictures of Graham Arnold to prove you wrong!

So you're having a bad day. Maybe your car broke down, you got fired, your spouse left you, you got evicted and the out-of-control oligarchic capitalist system is increasingly destroying the planet's very capacity to actually sustain human civilisation just so they can further stuff over-stuffed bank accounts with cash stained with the blood of the world's impoverished majority.

Yes, you've had better days. Fear not! Here are a bunch of super-cute photos of Sydney FC coach Graham Arnold looking like super furious, sad or frustrated! LOL! His day is much worse than yours, every day!

Poor Grah-Grah, nothing ever goes right! Not with those evil referees whose deliberate and sustained conspiracy against his team is so severe, sports journalists across the country have programs that just automatically insert "Graham Arnold angrily slammed the refereeing tonight... " into every article about every game in which his moneybags Bling FC team under-performs! Poor old Whinging Graham Arnold!

Oh no! The ref has given a free against his team just because it was a free!

When the ref gives one of your players a yellow card just because it was a blatant yellow that was lucky not to be a red!

Oh so that's a red just because it was, technically, to go by the so-called "rule book", a textbook red?

An opposition player not been given a red just because it wasn't a red card offence? Again?

''That player should be given a red because I say so!" 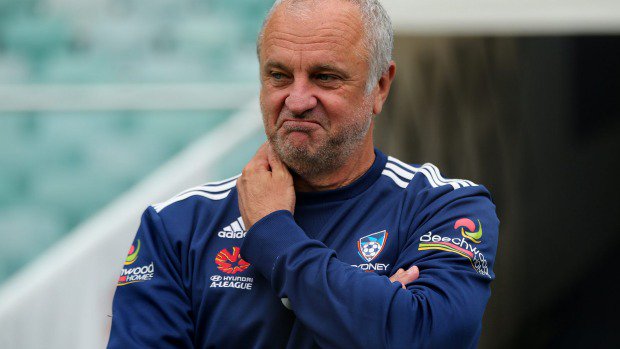 Having a bad dad day? Not as bad as this A-League coach whose team has somehow keeps conceding no matter how many defenders he starts! Oops!

"Oh shit ... there are the fans. Christ, just look at all those whitebread rich kids!"

"I'd have gotten away with it, too, if it wasn't for those meddling refs."

So just remember... no matter how bad your day is, at least you aren't Graham Arnold! Unless you are, in which case... fuck, dude, I'm sorry. The world is hurtling towards an eco-holocaust threatening the capacity of this planet to sustain human life and you're Graham Arnold. That's pretty rough.