The 6 Things You Should Never Say To A Psycopath

As anyone who has been near the internet at all in the past couple of years knows, some people in this world are introverts and others are extroverts. And both groups have their own special needs that only other introverts/extroverts could possibly understand.

But what about psychopaths? It can seem like our special nature and needs are all too often ignored.

This is not surprising when you consider all the negative portrayals of psychopaths coming out of Hollywood. What, with films ranging from American Psycho to Texas Chainsaw Massacre to the seemingly endless versions of Snow White (seriously, couldn't Hollywood manage to have at least one of them try to depict things from the Evil Queen's perspective???) it is no wonder psychopaths are so misunderstood and even feared!

No doubt you have many preconceived, and possibly quite wrong, notions about psychopaths -- that we are all mass murderers, torturers or CEO of major banks! I mean, it just isn't true -- some of us also run large oil companies!

Well you need worry no more! I have compiled this list to help you better understand and relate to the psycopaths in your life, and also increase your chances of staying alive! Yes, here are "The 6 Things You Should Never Say To A Psycopath"! Don't thank me, just buy me a beer sometime! Seriously! Just do it! Don't make me hurt you! 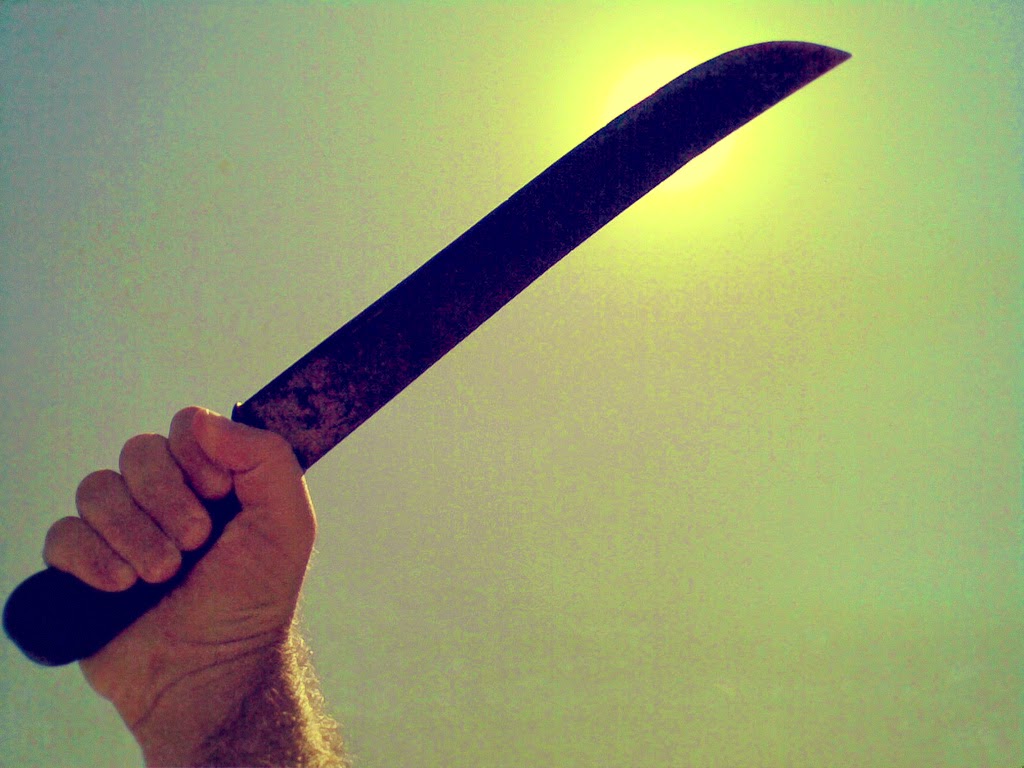 1) "Why are you carrying that machete?"

Yes we know we are carrying a machete! And yes we know it is dripping in blood! This is because psychopaths find social interaction to be difficult and frustrating if we don't have some sort of deadly weapon at hand with which to brutally slaughter whoever we are talking to, should the need arise.

This is just one of the defence mechanisms we have to help us cope with the outside world. It doesn't make us lesser humans or mean we hate you. It just means we are constantly weighing up whether or not to slash your ugly face to pieces with our machete.

Healthy relationships are all about maintaining respect, so keep in mind that pointing to the deadly weapon in a psychopath's twitching hand is basically like asking a disabled person why they have a wheelchair or asking someone what their false leg is for. As well as rude, it will also likely shorten your life expectancy.

Why do you ask stupid questions? Seriously, it might be well-intended, but asking this is almost guaranteed to offend/enrage a psychopath.

But basically, so you know, it is kinda how we recharge our batteries.

Imagine that every person has one cup of energy that can be emptied out and needs refilling. Generally, non-psychopaths find the act of brutally butchering another human being to be a draining activity, after which they will often need a decent rest or even a long holiday on an entirely different continent with a fake passport and new identity.

Psychopaths, on the other hand, find the act of slaughter to be an exhilarating and uplifting experience! It really gets the blood flowing (haha bad pun!)

Essentially, it gives us the energy we need to face another day on this truly godforsaken hellhole of a planet. Best to just get out of the way and leave us to it, if you know what is good for you. 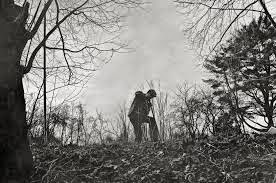 OK, now asking this is a pretty big "no-no". No psychopath will want to answer this one partly for some pretty obvious legal reasons and partly because each psychopath's burial ground is a deeply personal space. For many of us, the place we bury our victims is one of the few places we can ever really truly feel at peace.

Also, it can be hard to find a decent place to bury bodies and space is often at a premium. Asking this of a psychopath will just lead to us having one more dead body we have to find a place to hide and this will increase stress levels unnecessarily. So just be respectful and avoid this one. For your own sake.

Yes, OK, we know. Sometimes we start hacking away at anyone in our general vicinity when we get anxious or upset. Often it happens if someone tries to ask us where bodies are buried. It is a spontaneous response and often we won't even realise we are doing it!

However, you highlighting the fact in a public situation is unlikely to help and will only raise levels of anxiety and/or murderous rage. The best procedure is to wait for a quiet moment to discreetly raise the matter with the psychopath in your life and explain, gently and very, very carefully, your negative feelings towards having your limbs hacked to pieces.

Assuming you are still alive, of course. Which is probably pretty unlikely, because if there is one thing you can say about us psychopaths, it is once we start hacking, we tend not to stop until your body is in small, easy-to-dispose-of pieces! Sorry, it's just how we are! 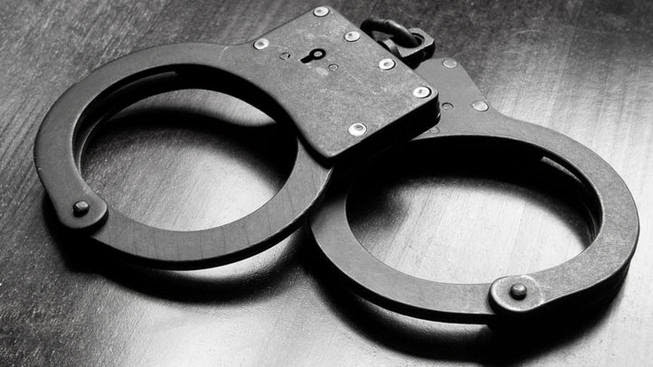 This is definitely a very bad thing to say to any psychopath. It is about the most offensive thing you could say -- and yet amazingly, you'd be shocked at how many times I actually hear this said to me! Even in 2014, some people still seem to think this is acceptable!

And why does it always seems to be police officers?!? I don't know what it is, but I can tell you right now the police forces in this country are clearly long-overdue for some "psychopath sensitivity training". Honestly, you'd think some of them have never seen a blood-splattered psychopath standing over a dismembered corpse before!

This really is one sure way to guarantee more blood being spilled. If you say this one to a psychopath, don't expect to stay alive much longer. You've been warned!

"Psychopath" is the proper name for people who suffer from the medical condition psychopathy, which is characterised by enduring antisocial behaviour, diminished empathy and remorse, and disinhibited or bold behavior. The term "psycho", however, is widely recognised by psychopaths as a negative slur.

Yes, a psychopath can, and sometimes will, call another psychopath a "psycho" -- often when engaged in a battle to the death over some prime corpse-burying territory. But for a non-psychopath to use the term is deeply offensive.

Also unacceptable are "the suspect", "the accused" or "the defendant" (see point five).

Use of such terms is likely to lead to your brutal death and it is unlikely to be quick or painless. Of course, if you have a psychopath in your life, you will probably die a horrible death sooner or later anyway. But you can do your bit to ensure your last remaining time on Earth is as non-offensive to your almost-certain-to-be murderer as possible. We thank you in advance.

OK, I hope that was useful, but if you wish to know more, I recommend these tracks about psychopaths and our culture. It is important to highlight those parts of popular culture treating psychoths with respect, so no I am not putting up any versions of Leon Payne's "Psycho" -- not even the Beasts of Bourbon's version despite Tex Perkin's fine vocal performance -- on grounds it uses the unacceptable "P" word.

I hope you enjoy the below tracks, however, featuring, somewhat unsurprisingly for anyone who has read more than one post on this blog, Tom Waits, Shovels and Rope and Alberta's finest country singer Corb Lund. DO YOU HAVE YOUR OWN PSYCHOPATH SONG? Suggest it in the comments.

'Cause there's nothin' strange about an axe with bloodstains in the barn. There's always some killin' you got to do around the farm...' Damn straight Tom! You tell 'em.


'She saw a thin man and a shadow make their way across the lawn ... And it'll be a long time before the sun shines on Shank Hill street again...' The South Carolina husband-and-wife duo's sensitive song by about a psychopath's sometimes strained relationship with their surrounding community.


'I ain’t got time to savour ‘em, I gotta drink ‘em quick
I’ve conveyed my urgency, I hope
If they catch me it’s all over, I’ll be way on up the creek
And I’ll be swingin’ on the wrong end of a rope'

Such a sad song by Canadian country singer Corb Lund! All about a psychopath from the American Wild West on the run from the law (does persecution of my kind ever stop?) who stops for a badly needed drink, only to be cruelly gunned down by the bar tender when he turns his back! I mean really, if you can't even trust your own bar tender who can you trust? Sad, sad song.