Have you heard the latest outrage by these global warming extremist scum? Nothing is sacred to these bastards, NOTHING!

While millions of Filipino people were struggling with the terrible effects of a massive storm, which a glance at Wikipedia will reveal have long occurred in the Philippines, a representative of their *own government* has outrageously dared to politicise this national tragedy!

Yes, the Philippines climate change commissioner Yeb Sano had the unbelievable *gall* to get up at negotiations over so-called global warming and say:

We cannot sit and stay helpless staring at this international climate stalemate. It is now time to take action. We need an emergency climate pathway.


'Unprecedented, unthinkable and horrific...' How DARE HE SAY SUCH THINGS!


How outraged those poor people must feel as they search in vain for non-existent food and water amid the apocalyptic scenes of total and utter devastation caused by one of strongest storms on record, that their own representative at climate change talks would have the gall to demand climate action!

I mean, especially as it is hardly a one off for them in recent years. Not when there was the death and destruction wrought by tropical cyclone Ketsana in 2009, Typhoon Washi in 2010, Tropical Storm Bopha last year and the southwest monsoon rains in August last year...

As dead bodies float past them on flooded streets, the peoples' rage must be uncontrollable at the sheer gall anyone would demand emergency action to reduce the growing risk of such severe, almost unimaginable social catastrophes engulfing them in such unspeakable, repeated tragedies. 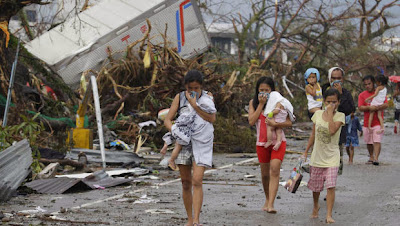 These people must be *outraged*.


The extremist bastard does not stop there! Sano *actually*, christ I can barely type these words I am so filled with rage at how goddamn *insensitive* he is being to even *dare* raise this at such a time, he actually says... climate sceptics should "get off their ivory towers" to see the impacts of climate change firsthand!

HOW DARE HE TALK TO ANDREW BOLT LIKE THAT!!!!!

Now if there is ever a man of the people, it is Andrew! When Australia’s most diligent climate “sceptic” isn’t on TV abusing anyone to the left of Attila the Hun, or at his keyboard writing racial abuse, or attending lavish dinners thrown by the prime minister or large corporate interests ... why he is... well... I guess sleeping as that is pretty much his whole week filled. 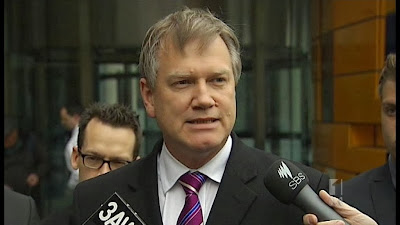 Andrew Bolt: Man of the people.


But if you thought this Sano bastard could not sink any lower... well get this! He actually said:

As the Earth warms up, that would include the oceans. The energy that is stored in the waters off the Philippines will increase the intensity of typhoons and the trend we now see is that more destructive storms will be the new norm.

Sure, this is what climate scientists have been screaming at us for a few decades, but what a time to raise it! NOW IS NOT THE TIME FOR SCIENCE! FOR CHRIST’S SAKE, HOW INSENSITIVE CAN YOU BE?!

You might think by now, a sense of shame would stay this prick’s tongue. No. He actually added:

To anyone who continues to deny the reality that is climate change, I dare them to go to the islands of the Pacific, the islands of the Caribbean and the islands of the Indian ocean and see the impacts of rising sea levels; to the mountainous regions of the Himalayas and the Andes to see communities confronting glacial floods, to the Arctic where communities grapple with the fast dwindling polar ice caps, to the large deltas of the Mekong, the Ganges, the Amazon, and the Nile where lives and livelihoods are drowned, to the hills of Central America that confronts similar monstrous hurricanes, to the vast savannas of Africa where climate change has likewise become a matter of life and death as food and water becomes scarce.

Not to forget the massive hurricanes in the Gulf of Mexico and the eastern seaboard of North America. And if that is not enough, they may want to pay a visit to the Philippines right now.


The only thing I can possibly imagine in his defence for this atrocious abuse of a tragedy to push his extremist “global warming” barrow is the poor guy is probably traumatised.

You see, his own hometown was destroyed by the almost unprecedented Super-typhoon and he is yet to know the fate of many relatives. Sano did receive news his brother was alive — having spent the last two days gathering the bodies of the dead “with his own two hands”.

No doubt all that grief is affecting the poor sod’s judgement. No, if you want dispassionate commentary that would never exploit any tragedy to push an agenda, Andrew Bolt is your man.

And no doubt Andrew has already written a blog post pointing all this out. I can’t actually read his blog myself, due to doctor’s orders and a strict court injunction banning me from doing so after I slaughtered 183 innocent people last year in a tragic case of “Bolt-rage” after I accidently skimmed a post of his on racial discrimination.

But if you want to know what the extremist hippies are saying about him, you can read independent "journalist" Wendy Bacon responding to a Bolt blog post attacking her on the question of climate science.

Now, if you are one of those insensitive hippy pricks cruel enough to *politicise* such a tragedy but advocating action about its causes ... then: You can add your name to a call on rich nations take climate action. And you can donate to grassroots relief efforts, but be warned, these pricks out doing all they can to help the affected also point out climate change may just be a factor.


'Weather's been funny 30 years or so...' Corb Lund's almost haunting song on global warming may be a minature study based purely on southern Alberta in Canada, without the scenes of death and destruction that have become all too common, but its sense of unease based on emperical evidence of serious climate change is still eerily unnerving.