What the media should do, of course, is take all their editorials and op eds about a world famous politican who has died -- with their "authoritarian" and "tyrant" descriptors and their tales of economic destruction and class hatred and rising corruption and society breakdown and support for dictators -- and just do a simple find/replace, removing "Hugo Chavez" and inserting "Margaret Thatcher". Just to save some time.

One of these two leaders' deaths sparked widespread mourning, the other street parties. Check out these images and see if you can guess which one was the "tyrant"... 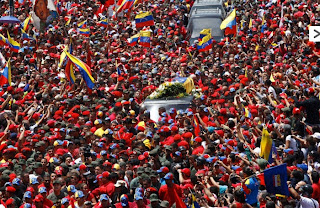 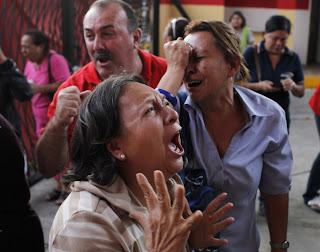 Venezuela's streets were scenes of outpourings of grief.


Real News report on mourning for Chavez in Venezuela and beyond 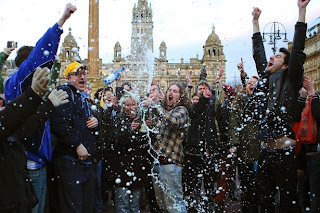 Celebrations break out in Glasgow's Green Square after news of Thatcher's death.

A street party in Liverpool with fireworks -- to mark the death of a leader who tried her hardest to destroy the city.


So a murderer and torturer, who denounced Nelson Mandela, befriended the worst dictators like Chile's General Pinochet and gave Pol Pot a helping hand has finally fucked off to Hell.

The corporate media are eulogising her and expressing "disgust" at those who have the gall to be happy at the demise of their greatest tormentor.

But even when they might feel obliged to give some nod of recognition to the savage class war Thatcher waged across Britain, there is one aspect likely to be largely ignored -- on top of Thatcher's infamous assistance to pro-Western dictators all over the world, there was Thatcher's policies of murder and torture in the cause of deepening British control over the six counties in Ireland's north.

It is well known that -- on top of the torture and abuses in prisons and the campaign of killings and repression in Ireland's north -- Thatcher's refusal to compromise in the case of the hunger strike by republican prisoners in the infamous Long Kesh camp lead directly to the death of 10 men.

Under Thatcher, the policies of repression against the Irish struggle extended onto mainland Britain, with the gross violation of the rights of Irish people living in England that included the framing by means of torture of innocent people for bombings they had nothing to do with.

Censorship is a sign of a guilty regime -- the truth cannot be allowed out. And so the censorship in Thatcher's Britain on "the Irish question" went to absurd lengths -- Sinn Fein leader Gerry Adams' voice was even banned from being broadcast. But it was not just Adams' voice -- a song by a popular band that dared deal with the topic was banned from public broadcast and a TV performance of the song was pulled from the air.

The song was The Pogues "Streets of Sorrow/Birmingham Six". Pogues frontman Shane MacGowan is now better known as an irredeemable drunk, but his lyircs savaged the British state crimes against the Irish people -- in Ireland and Britain. It campaigned for freedom for the Birmingham Six and Guildford Four -- framed for bombings they didn't commit, both before Thatcher came to power, but whose suffering continued under her government while attempts to get out truth were censored.


Thatcher's regime was one that could not even bear to hear about its own crimes in a song...

...There were six men in Birmingham
In Guildford there's four
That were picked up and tortured
And framed by the law
And the filth got promotion
But they're still doing time
For being Irish in the wrong place
And at the wrong time

You'll be counting years
First five, then ten
Growing old in a lonely hell
Round the yard and the stinking cell
From wall to wall, and back again

A curse on the judges, the coppers and screws
Who tortured the innocent, wrongly accused
For the price of promotion
And justice to sell
May the judged be their judges when they rot down in hell...

May the whores of the empire lie awake in their beds
And sweat as they count out the sins on their heads
While over in Ireland eight more men lie dead
Kicked down and shot in the back of the head ...