Flexibility. Or 'how we can screw you from as many positions possible' 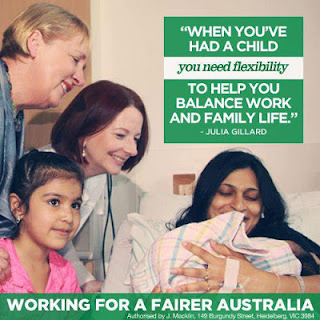 'Yes. Well spotted Jenny! This mini-human will do *just fine* for our experiments!'


Jesus, this ad is pathetic. Not only is it a strong contender for "the creepiest piece of political propaganda ever" (or at least since the last time Christopher Pyne opened his mouth), it also seems as though Labor has simply given up. Christ, neither Gillard nor Macklin are even *trying* to kiss that baby! I know the Libs are well ahead in the polls, but surely they should make a bid for at least *some* votes.

At least it does have a message. About flexibility. For parents. To "balance work and family life". A noble goal indeed, and explains why Gillard and Macklin are forcing single parents to switch to the much lower Newstart allowance once their youngest child turns eight. Leaving parents up to $140 a fortnight worse off.

Adelaide's Single Parent Action Group spokesperson Sherree Clare commented: "Parents who are students [were] also cut from the Pensioner Education Supplement one month before the Newstart changes came into effect ... As a student I stand to lose $300 a fortnight when my youngest turns eight in May."

But what if you have a job? Clare said: "Working parents must be working 35 hours a week. If they are not they are forced to either find a different job or take on a second job, they lose 40c to the dollar after earning $31 a week and the cut-off amount from Centrelink is ridiculously low.

"Regardless of how many children you have, there is no extra allowance to compensate this. It is all set for a single person rate."

Clare explained exactly what this means for those affected parents looking for that badly sought after "balance of work and family life": "Many families who have been switched to Newstart have as little as $6 a week left after rent and power deductions to feed their children."

Flexibility. A word politicians use to describe their desire to screw you from as many positions as possible.


Lie to me then move on.

PS: To those whose response is, like totally shut up Carlo coz Abbott will be worse, well yes, but I direct you to my detailed philosophical examination of the nature of evil, inparticular how it relates to the interrelationship between its "greater" and "lesser" varieties. Also known as my last Carlo's Corner column. Also, here is a poem Thank You Feminist Gillard in which a parenting payment *and* Australian Council grant recipient expresses her gratitude to our Glorious Leader.